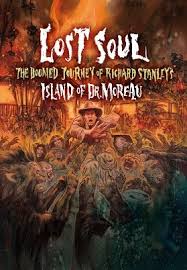 A few years back I was luck enough to reach out to Mr.Stanley and interview him. He was extremely nice and I had asked him about Island of Dr.Moreau. I wished at the time that the whole story could be told- Enter the brilliant David Gregory who not only owns "Severin" but is a wiz at film making and documentary work.  He and Richard both did the wonderful "The Theater Bizarre"

I love the new trend of documentaries on doomed projects starting with Jodoroswki's Dune and the up coming Burton/Superman film. For film fans its bitter sweet, a great movie that will never come to be yet its still a fascinating.

Lost Souls: The Doomed Journey of Richard Stanley's Island of Dr.Moreau tells the story Stanley's attempt to bring a favorite book by H.G Wells and turn it into a movie befitting it. However with big stars attached it quickly becomes a big budget film and soon the project slips out of his hands. Through various interviews we experience the twists and turns and downward spiral of the doomed project. 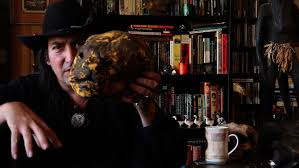 David Gregory is a pro with this type of film having done many full documentaries as well as mini ones for his company Severin. The detail and love that has been poured into telling this story goes far beyond simply filming interviews. The material that was gathered really makes this a stand out effort. Amazing concept art and story boards give us a glimpse of what his vision of Moreau would have been had it been made.Also rare pictures and behind the scenes footage helps give a fuller picture. It also becomes a sort of David verus Goliath tale, David being Richard a smart indie visionary and Goliath being the big studio New Line holding all the cards. However Gregory also doesn't play favorites and gives different view points and allows the audience to draw there own opinion. You can easily fall into that trap but Lost Souls remains fair and balanced and doesn't make villains out of Rob Shaye or the other powers at work.

The interviews themselves are entertaining and engrossing and as one of my Facebook friends put it, The only complaint is the movie wasn't long enough because I could hear those stories all day. And in a documentary that is the kinda complaint you want to have.

By the end you start rooting for Richard even though you know how the outcome will be. Being a big fan of Richard Stanley and of films in general its a real treat.Lost Souls is simply sublime and as I described to a friend pure film geek goodness. Pick this up at once and let yourself get lost on the Island.

Posted by Gorehound Mike at 3:12 PM