A young boy named Harry Potter finds himself in a world of goblins and fairies. Am I talking about Harry Potter? Hell no, years before J.K would pen her wizard fable Ed Naha wrote something eerily similar. Troll has a awesome cast from everyone from Sonny Bono to Julia Louis Dreyfus (years before Seinfeld)

Troll is a crazy roller coaster ride and is a hell of alot of fun. Not popular at the time, these films are quickly growing a hardcore fan base of its own. Award winning writer Ed Naha sits down with Gorehound Mike to talk about writing this cult classic. 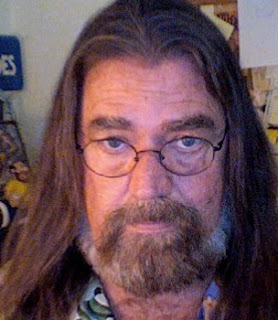 Writer Ed Naha and his Memories of Troll

“Troll” was my introduction to Charles Band. I had recently moved to California
from New York and made ends meet by both writing books and covering films for “The
New York Post.” Back East, I had written a book on Roger Corman and wound up
writing my first two screenplays for him once I made the move.

I was sent a press package for a really odd film called “The House Where Evil Dwells.”
I mean, you know you’re in WothaLand when a spirit possesses a woman’s bowl of soup
and her reaction is “There’s an awful face in my soup.” Anyhow, it was produced by
Albert Band, Charlie’s Dad and a wonderful, wonderful guy. He loved making movies.
So, I did a phone interview with him about the film for the newspaper and, having no
pride whatsoever, told him that I’d just written two low-budget films and if he ever
needed a writer…call. (Pleasegod.)

A few months later, he did call. They were having problems with a script for a movie
called “Troll.” I went to Empire and met Albert who, then, introduced me to Charlie and
Debra Dion, who oversaw a lot of productions there.

They described the movie to me in broad strokes. I don’t know whether they had an
outline or an actual script but they didn’t show it to me. I think it was a pretty straight-on
horror premise. The cast is stalked by a troll. So, we all chatted about how it shouldn’t
be a straight-on horror film. Hokay. Now, what? I was hired, my agent did the deal and I
was off and running, or at least walking quickly.

Anyhow, once I got into the script, I met director/special effects designer John Beuchler
and he took me to his creature shop – I think it was in his garage - and showed me some
of the initial artwork and models.

I handed in the script and that was that, for me, anyhow. I have to tell you that the folks at
Empire were great to work with. I mean, the script was definitely “out there.” You had a
tough-talking witch upstairs, a dwarf who recites epic poetry, and a father who plays air-
guitar to Blue Cheer’s “Summertime Blues.” It certainly was different. And, the odder it
got, the more excited the folks at Empire got.

When the film was completed, Debbie Dion proved herself to be a saint. My parents were
visiting from New Jersey and she arranged a screening for them at Empire. So, the three
of us watched the movie together. My parents were impressed. I mean, nearly everyone
who’d ever been on TV in the 60s and 70s, from Gary Sandy to Sonny Bono, was in the
cast. I think the only thing that could’ve made my mother more elated was having Tony
Orlando and Dawn wandering around.

The movie was released and a lot of folks found it, um, odd. Some loved it. Others had a
more “WTF?” reaction. Over the years, it attracted a solid following – probably because
a lot of kids saw it when they were young. I mean, it’s a family horror film, kinda. All the
folks who are victims of the troll are transformed into whatevers in very cartoonish ways.

Of course, once Rowling’s “Harry Potter” books were published, the inevitable happened
within the toobz of the Internetz. I have to admit, I was the last to stumble upon
the “Troll” vs. “Potter” imbroglio. There are some folks who swear that Rowling, whilst
on the dole, viewed the VHS and was inspired. If that’s the case, God bless her. Her
Harry had a lightning bolt on his forehead but never rocked out to Blue Cheer.

For the last decade or so, there have been various announcements concerning a “Troll”
remake or a sequel or a series of festive hats. (I made that last part up. Could you tell?)
All I know is: I’ve never been contacted. I’ve never been approached. I’m not involved.
So, you can be pretty sure that, if there is another “Troll” flick, nobody will be playing air
guitar to “Summertime Blues.”
Posted by Gorehound Mike at 2:08 PM No comments:

Halloween Series: The Best and the Worst Hosted by Michael Myers!! 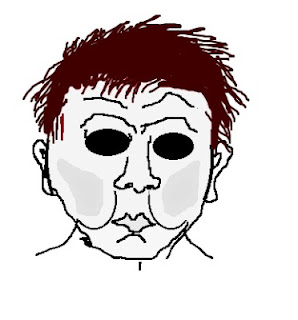 Hello fiends I havent posted a new blog in alittle while so I thought i`d do something different and creative.Michael Myers dropped by and after he got done stabbing everyone he agreed (or rather nodded) to host this segment.

Of course the original is always the best.

Halloween 2
A very strong sequel, it reveals some very important mythos to the legend of Michael Myers, like Laurie being his sister. The blood is amped up ten fold as the original has very little actual on screen blood. Some sexy nude nurses also make this enjoyable. Cleverly some Halloween season myths also turn up like the boy who got the apple with a razor in it. Creepy and adds to a sense that this is more then just a night of fun harmless tricks.  I think the mask is possible the best of the series.


Halloween 3
I went back and forth on this one, but bottom line I gotta respect the attempt to do something different, and come on, you know you`ve had the "Halloween song" stuck in your head. Yes it doesn't have Myers in it, which left a sore taste in die hard fans mouths

Halloween 4
Do to the back lash by fans, Myers is back and so is the lovable Doctor Loomis who is yet again tracking down his former patient. Danielle Harris breaths new life and adds something to the series. Some great creepy scenes and a shocker ending makes this a treat not a trick.


Halloween 6
What I love and also hate about this film is trying to explain the root of Myers quest to kill. On the one hand is takes away the mystery of the character. Yet I cant help like the fact that something totally different was tried. It brought back the seasonal dark holiday theme and it nicely connects to parts 4 and 5. People seem to hate on this film but it shows the attempt to expand the legend of Michael Myers and make him more then just a mindless killer with a knife. Is it perfect no but I like its boldness and worth a look at.


Halloween Remake
Bring on the hate mail!!! Yes I did enjoy this one. Zombie shows Michael as more of a human monster then the shapeless supernatural boogeyman. Love it or hate it, it takes some balls to attempt to remake such a milestone in horror film history, pissed off fans seem to forget that its just a different take on the original. You gotta love his cast. Hated to see Dee go. Do I think this is a great film, no but I liked it enough to re watch it.

H20
The return of Jamie Lee Curtis. This is a total love letter to the die hard fans. It ignores the other entries after 2 and focus`s on how Laurie has been dealing with (or not rather) with her haunted past. A few plot holes are afoot, such as Myers has been gone for 20 years but where has he been hiding? A great young talent cast makes this a entertaining and worth revising. A fitting tribute to everyone's favorite masked boogeyman.

Halloween 5
Sloppy and poorly written and to top it all off they killed a beloved character Rachel.Seemed that unlike part four, the director seems to care very little about the mythos or adding anything new, just a simple blood bath and tit fest. No risks seem to be taken here and the end result is a very dull film.

Halloween 8
Honestly I think it would have been fitting to end Laurie's saga with H20. I mean she finally fought back and killed her brother, its over. But in Hollywood monsters only die if box office is poor. Just bad plain and simple.

Halloween II
I was with Zombie throughout his film career but this one was bad, I think he went little too wild with the story and while I like the idea of trying to go little art house/different It just doesnt  mesh well. Sorry Zombie, I love your work but I have to say this was a mis step.


So hope you guys enjoyed my Halloween round up. Please keep your comments civil as this is just purely my opinion and meant to be fun. My picture of michael myers is something I made, if you want to use it just ask my permission, thats all I ask. gorehoundblog13@gmail.com all i ask is give me credit for it.


WANNA HEAR FROM DICK WARLOCK THE REAL MICHAEL MYERS? Read my one on one interview with him in my blog Archive
Posted by Gorehound Mike at 9:38 AM No comments: 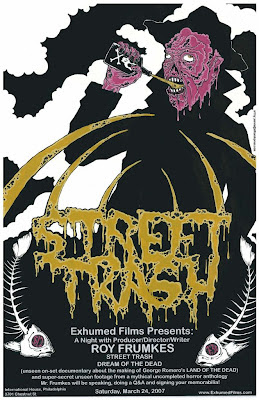 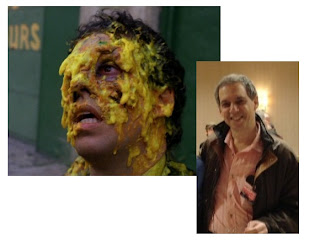 My inspiration for writing the screenplay was the earlier version, shot in 16mm, which was written by Jimmy Muro and Mike Lackey.  I tried to keep as much of that version in my screenplay as possible - but added a number of characters such as Fred's younger brother, Wendy and Schnizer, Bronson and his Winette girlfriend, and Bill the cop, which was a part I wrote for a good friend of mine - Bill Chepil - who actually was a former cop whose beat was Times Square back when it was the most dangerous beat in the country.

I put in a lot of personal material as well, which I think is normal for screenwriters.  When Kevin tells Wendy that his brother set him up for getting humped by a dog, that was something my brother actually did to me when I was maybe four or five years old.  When Wendy tells Kevin she was in the bumper cars and got hit so hard from behind that she swallowed all her snots, that happened to my girlfriend at the time (who was Asian like Jane Arakawa).  So I had the pleasure of insinuating bits of my life into the film, and always enjoy revisiting those scenes.

In terms of structure, since it was not a normal 3-act narrative with clear main characters, I had in mind a Kurosawa film called Dodes Ka Den, which was an ensemble piece set in a hobo camp at the end of a subway line, and I also used Huckleberry Finn.  Some of the power of those sub structures were lost in the editing (it's discussed a bit in THE MELTDOWN MEMOIRS), but some survived.

Posted by Gorehound Mike at 1:12 PM No comments: