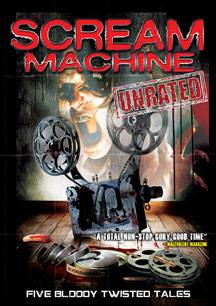 Once and awhile I get film makers or promoters that want me to review there films on my blog. Some are bad and others like "Bunny Game" are brilliant. The horror film anthology is a time honored tradition with such gems like "Creepshow" "Dead of Night" etc. Scream Machine is a horror anthology but sadly is no where near as good as the above mentioned. I`ll break down the stories in segments. Since some segments are so short minor spoilers ahead... Nothing major though.

Sledgehammer is short but it suffers from writing that is terribly predictable. When the ending happens your going to do a face palm. This one features the awesome David Hayes who sadly only has a voice over cameo. Hayes always has a presents and its a pity he couldn't be in it as an actor.But maybe that's a good thing. One common thread in this and the whole film is the lack of creativity. I mean the mask used is store bought-lame...Strike 1.

Set in 1993 this segment follows a man with a obsession with serial cannibal Jeffery Dahmer. This segment might be the one the strongest ones but still has its weak points. The characters are mad cap but tend go over board into drama class scene chewing mode. Case in point the guys wife. Also the film makers couldn't be bothered to check there facts. Dahmer died in 1994 not 93.. Its called the internet guys, use it. The gore is decent and the post death scene with the head is something like "Nekromantic"

April Fools Party
A gang of junkies are hanging around just being sleazy. For fun the group decide to play a April fools prank on there friend who deals and is strung out. He just happens to be paranoid and armed, what could go wrong? The plot is as laughable as the acting and the bad junkie makeup. I think the real prank is if anyone expects this to be good.

Septic Shock
Have you ever wanted to watch a guy in a septic tank and that's it? Well your in luck because that's what you get, well and a tacked on gross out ending. However this feature has one the most natural actors of the film that being the turtle that eats celery. Yep you heard me right. At this point in the film your brain seems to shut down and go into default mode but I soldiered on for the last story.

The Deadly Indie Drive In
Two lovers watch a film in a drive in. The movie they watch is of some guy cleaning up his home, which is of course something we all would pay to see. But as the sleazy guy gets his ample date a treat she starts to hear voices coming from the radio.

Like the rest of the film nothing in this segment makes sense or has any hint of clever writing. The  attempt at humor fails and again the acting is drama school level.

Overall: When I was sent the film I was told its a cheesy fun film and I get the vibe they were trying for but the problem is Scream Machine is neither funny, or creative and has never heard of the term less is more. I`m not saying over the top is a bad thing, when handled correctly it can be great however this is not the case. Cannibal Pen Pals had a nice balance of over the top, however the hammy acting ruins it. Septic Shock was heading into a area of psychological horror but never gets there. The effects are not great but as its a low budget film I think they did a decent job. The kill first death in Sledgehammer is rather nicely done.

Not even so bad its good, Scream Machine needs a serious over haul.

Posted by Gorehound Mike at 4:36 PM