The market for blu`s for horror, cult and underground films have never been so large. Its truly a great time to be a fan of these films. When fans discuss companies that are putting out such great stuff Anchor Bay seems to get trashed.

I think many fans feel betrayed by them and say they have sold out and indeed it would appear so, AB only does recent film releases and mostly not good ones at that. However paraphrasing the immortal Bard I come here not to bury Anchor Bay but to praise them. I`ve loved films since I could remember but everything would change when my father bought me an old VHS of "Little Shop of Horrors" not the remake but the Corman classic. Since that time I`ve been in love with horror films and when I was old enough to really discover films outside of the mainstream slashers i.e Friday the 13th series,Halloween etc it was Anchor Bay who was paramount in my finding such gems as "I Spit On Your Grave" "Demons 1&2" "Sleepaway Camp" "Alice Sweet Alice" and important films like "The Evil Dead" which was the very first thing I bought with the first job I ever had. And strange oddities like "The Stuff" "Pin" "Link" etc.


Cutting Edge: Anchor Bay also blazed a trail in how the presented the films. Mostly companies were putting out videos in a Pan and Scan but not AB who released most of there films in Widescreen and later Ana morophic widescreen. Not only are the films in proper format but they had THX sound. With the advent of DVD they company expanded there catalog and put out great films like "Prom Night" (An early DVD release) and strange films like "The Pit" and "Fade to Black" The picture and sound were upgraded as well and a new 5.1 mix was added instead of just a mono track. Many also had insightful commentaries interviews etc.

Packaging/Limited Releases:
I get really misty eyed when I think of some of the cool releases like the Halloween double VHS set complete snow globe or the Wicker Man in the wooden back (still a gem I need) Not to mention the bad ass tins for Beyond, Maniac, Halloween 4 and 5 etc. Big glitzy packaging is common place now but back when AB did it it was pretty much unheard of. Also there were the first to do limited edition videos back when everything was mass produced to death. It gave fans and collectors a rush when they got say "Army of Darkness" limited numbered edition. Now everyone does it but they did it first and in some cases better. 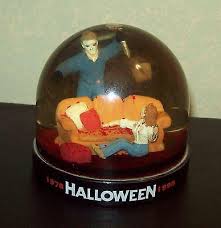 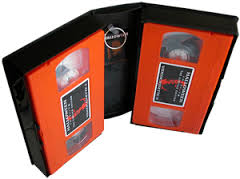 I wont deny that when the company joined with Starz they lost the edge that made them top of the mountain and lately they have not even tried to compete with Scream Factory (Shout Factory) who reminds me a lot of AB in there hay day. But lest we forget that Anchor Bay joined forces with SF to put out "Halloween the complete collection" which i`m sure took a small miracle to pull off.

I`m glad to see there are fans of the label out there and a market for OOP titles both common and rare. I`ve been out of touch in the market but titles like "Link" and "Fade to Black" "Road Games" and certain Hammer titles would fetch quiet a pretty penny.


The bigger picture is this: Countless fans and collectors were exposed to films they might not have without this label that blazed a trail for every single company releasing blu rays today.

So when your quick to point the finger at Anchor Bay remember how many great films they put out many of which are still only available through them. Certainly they were so important to my film education and without them I might not have enjoyed such favorites as "Wicker Man" or "Evil Dead" til much much later if at all.