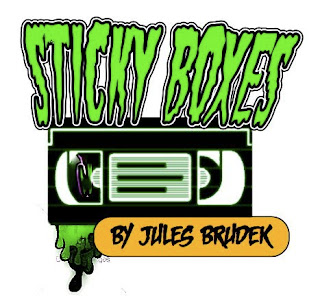 I`m very happy to introduce a new writer to the asylum. Jules Brudek who is a very talented award winning writer.

When I was a Video store clerk back in the late nineties, I had the opportunity of watching and enjoying all the horror movies that hell made and heaven would allow. From straight to video gore to shot-on-video splatter fests to soft porn infused midnight movies, I spent hours of my off time indulging in any video I could get my sticky hands on. During working hours, I re-alphabetized the VHS boxes neatly on the shelves, covers always facing outward, so the gore-ious artwork could be properly appreciated. Now, VHS in back in vogue and everyone has a story like this one about the unappreciated allure of VHS, so, I will keep my nostalgia brief.

One last anecdote, I named the column “Sticky Boxes” because that’s what I touched day in and day out working at the video store. Sweaty handed customers brought back their rental VHS tapes encased in gooey grime. Everyday, I would check them back in, wipe them off and re-stock. Humorous note: the bigger the babe’s boobs were on the box the stickier the VHS box was upon return.

Each month, I will examine a hidden treasure from the deserted island world of VHS. Tthere are still so many horror and cult rarities that have not been released on DVD and Blu-ray, it’s worth digging into my collection and reviewing some personal favorites.

Tonight’s Sticky Box:
The Haunted
1991/Made for TV movie
Starring Sally Kirkland
Available on PAL VHS in the UK
Not available on DVD or Blu-ray

*Note: Please don’t confuse The Haunted (1991) with the film of the same name from 1977 starring Aldo Ray about a desert town under attack by a woman using powerful witchcraft during the Civil War.

“In the name of Jesus Christ, I command you to be gone!”

I know you’ve seen it all; Poltergeist (1982), The Haunting in Connecticut (2009), The Conjuring (2013), The Amityville Horror (1979) and the remake in 2005, but have you ever seen a prudish father of four raped by a transgender demon?  I didn’t think so.
Set in the 1970s and based on real accounts about the Smurl family, this haunted house flick starring Sally Kirkland as Janet Smurl and Jeffery DeMunn as her husband, Jack Smurl, delivers the ghostly goods with cheesy moments and traumatic incidents that the whole family will enjoy.

The Haunted builds like a typical ghost story, introducing us to the normal Smurl family as they are moving into their lovely new home. As the family settles, the feeling of pre-pubescence coupled with Catholic restraint becomes apparent. Mrs. And Mr. Smurl have four daughters and a sexually benign marriage. Making matters worse, Mr. Smurl’s rigid parents, Grandpa and Grandma Smurl, live with them, making this a battleground for spirits to enter, as psychic Lorraine Warren will mention later. As strange occurrences start keeping them up at night, The Smurls decide to call for some help. Their church ignores their pleas. Enter The Warrens.

The Haunted could be a prequel to The Conjuring because it introduces us to the expertise and style of the most famous and prolific of all paranormal investigators, Ed and Lorraine Warren.  In 1952, they founded the New England Society for Psychic Research and became world famous in the 70s after their real life investigations became the subject of the book, The Amityville Horror, written by Jay Anston and the film of the same name.  Ed and Lorraine Warren come off as a bunch of badasses in The Haunted and it’s really a wonder why the tag-team didn’t get invited to more haunted houses films like Poltergeist.  Using her prowess for the paranormal, Lorraine identifies four sprits in the Smurl home: a man who suffered terribly, an old confused woman, a little girl, and lastly, a nasty demon manipulating the other three to attack the family.

I have two favorite scenes, the aforementioned rape scene that has yet to be topped cinematically and a scene where Grandma Smurl tells her daughter in-law she was tortured by screaming profanities. Literally, I laughed out loud and that doesn’t happen often. In order to get your hands on the film, you will need to find it on AmazonUK and have a PAL compatible VCR. I did it and I don’t regret it. Another option, you can wait for it to air on the Sci-Fi channel. It shows up on occasion.

Rumor has it, The Haunted is Leigh Whannel’s (Hell yeah!) favorite horror movie and it inspired him to pen such modern horror classics as Saw (2004) and Insidious (2010). The cult following this film received in the United Kingdom was monumental, prompting twentieth century fox to release the VHS in the late 90s. 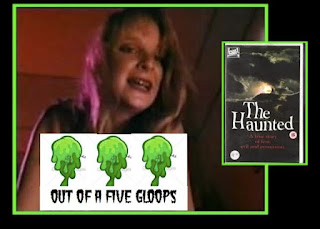 I give the VHS presentation of The Haunted: 3 sticky gloops out of five.