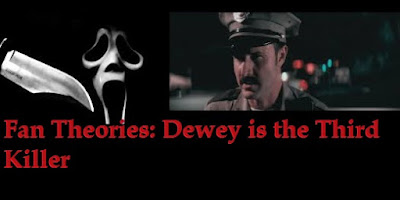 I really enjoy reading urban legends, creepypastas and fan theories. Some are brilliant and give a whole new meaning to a film and some are just down right bad and or silly. This segment will pick out some that are possible and most importantly are fun to read and think about.

Dewey is the lovable cop in the wildly popular "Scream" film series. He seems to embody the small town vibe in which the story takes place.

But what if the slow witted yet charming law man was actually a cold blooded killer. There are actually theories out there for Randy Gale etc but the Dewey theory holds the most weight. I warn you his is a rather long one but VERY interesting. The following are clues for fans to look out for AND one which seemed to allude everyone else!

The Clues: Sounds from A Ghost
In an early heart pounding scene the killer chases Sidney through the house. She dashes off to her bedroom and using the than new advent of the internet is about to place a call to the police. However she never sends the call because Billy pops up. Who shows up instead WITH a ghost face mask no less? Dewey Riley of course. *Also watch that scene over again, WHY would he hold that mask up like that? To further scare and psychologically torture Sidney? Its something we seem to just accept but if you think about it, its a very odd thing to do.

Consider this:She lives in the middle of nowhere so even if some mysterious person called the police it would take them awhile to get there. Unless of course you already knew what was going on. Ok heres where it gets even better. A clue a stumbled on myself. The fact that Billy s alibi centers around his arrest (because of you guessed it Dewey) and the Ghost Face call...which leads to clue two.

Hes got your number:  While at her friends house Tatums house Sidney gets a call while Billy is in jail. I know what your thinking, It was Stu cleverly throwing off Billys trail. But think about this Dewey doesn't come out of his room until AFTER the killer hangs up. It seems odd that when his door was banged on he didn't spring into action as his training would have dictated. So why does he wait.....Strange?

If the Shoe Fits: Several sites also mention that the killer wears police issue shoes. The same kind as Dewey.

We all SCREAM for Ice Cream: Sydney and Tatum are strolling in the supermarket talkng about the killer and about the party they are going to throw. The Ghost face killer's reflection is seen in the ice cream fridge. Next scene Dewey is consuming a frozen treat.  A tip off?

First Cut is the Deepest: One site debunks this theory based on the Deputy being stabbed.

HOWEVER: Consider the following. One of two things can be at play here. One: First we know Billy and Stu arent above stabbing each other to make it look like its not them. Weird that Dewey is only stabbed in the back and not say the throat, chest etc it seems to more prove rather than disprove.
Two: Another theory is Billy and Stu actually meant to kill Dewey because they were betraying him and didn't want to risk the officer telling anyone, no loose ends. Makes a lot of sense when you put the puzzle together.

(I should also point out in Scream 2 Randy seems to also down play his injuries which makes Dewey upset-guilty much?)

The Keys: Another tell tale sign is when Dewey is stabbed the killer happens to have his keys. This would also support the idea of Dewey being in on it the whole time.

The Smoking Gun?: At the end Billy and Stu tell our poor heroin of there plan. Frame Sids father for the crime and make it look like he shot himself. Ok so obviously this was planned out however the gun they plan to use is you guessed it Dewey Rileys!

Other facts to consider: Dewey has a knowledge of horror films (when mentioning the film Town that Dreaded Sundown he quickly says its about a killer in Texas)

Motive: Dewey is a cop that gets no respect in a small town. His sister disrespects him and she pays for it.

Gale: One theory suggests Gale was to be a victim in the grand scheme between the three. However he had a change of heart and couldn't go through with it. There is a creepy scene where he asks her if shes scared as they walk alone. Billy even thinks shes dead.

SCREAM 2: My theory is that Dewey  has nothing to do with the murders in the second film. With that said there is a major clue that seemed to go over a lot peoples heads. It comes in the form of a quote.

"How do you know my dimwitted inexperience isn't merely a subtle form of manipulation, used to lower peoples expectations, thereby enhancing my  ability to effectively maneuver within any given situation"

Hmmm who else manipulates people umm sociopathic killers. The quote at first listen is amusing but takes on a whole other much darker meaning if you think about the other evidence. The choice of words seems very fitting, maybe he was actually the master mind using Billy and Stu and puppets?


Hope you enjoyed reading this and much as I enjoyed writing and researching it. I`m hoping to explore other fan theories in the future. Again this is simply and purely for fun. If you find yourself picking holes in it just repeat to yourself: Its Only A Theory, Its Only A Theory

Posted by Gorehound Mike at 2:11 PM