Blood Splattered Blu: A Candle for the Devil

Title: A Candle for the Devil
Director:
Company:
Review Written by: Joe Mazzella 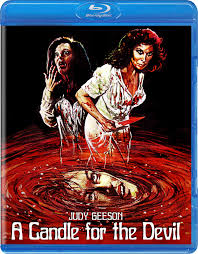 The wonderful Folks at Scorpion Entertainment have released another great 70s Spanish Horror classic A Candle for the Devil directed by the great Eugenio Martin ( Horror Express) The film is a dark sadistic look into the lives of two old world sisters Veronica and Maria (played by Esperanza Roy and Aurora Bautista ) running a boarding house who detest there many new tourist tenants . Most of which are loose, scantily clad sexy women who show off their assets at every turn. This angers the two sisters especially Veronica who had been previously stood up on her wedding day years before. She sets out on a murderous vendetta after losing it on a sunbathing woman whom she accidentally kills.  The women's sister ( Judy Geeson Fear in the Night,Lords of Salem) arrives looking for her sister but she is told by the sisters she just left much to Judy's surprise. She looks and asks in town having no luck. As other tenants anger the sisters more murders some quite gruesome happen as do more disappearances
Setting up to a great last reel which is truly unnerving and tense . Watching the breakdown of the sisters as they lose it more and more was truly a joy to watch. As with Eugenio Martins previous film. Horror Express. Candle has its share of fright, gory viscous murders and great acting especially by Lone Fleming (Tombs of the Blind Dead) as the sexy horny tourist , Blanca Estrada, Vic Winner ( Dracula's Great Love ) and Fernando Hilbeck( Lead Zombie in Breakfast at the Manchester Morgue)  who literally saves the day here. The film is highly recommended especially for you euro horror fans and is an excellently written and directed film.

The brand new 16x9 HD transfer is absolutely gorgeous and the widescreen picture truly shows the great Madrid landscapes and country. For years we suffered in the US with no vhs or DVD releases. cut TV prints under the  title It Happened at the Nightmare Inn , horrible bootleg copies until now.  The film is uncut in the US for the very first time and it has never looked of sounded any better than it does now .

The great extras include the original theatrical trailer in widescreen as well , an intro by Nightmare Theater's own sexy Katarina and we have a very informative and entertaining interview with the film’s star Judy Geeson who discusses the film , her career before and after this film and great stories about all her costars from all her great films from her long great career. All in all this is a must see a great release and I absolutely recommend it .
Posted by Gorehound Mike at 8:39 AM