VHS Retro Horror!! Blast from the past!

VHS, many people see them as dated and some younger readers most likely have never even watched a movie this way. While I do admit DVD and Blu Ray are leaps and bounds better in quality and if your a geek like me, you crave those bonus features. Still I long for those video rental days, many weird, lurid titles most of which have yet to see a DVD release and the cover art that graced them were enough to excite this young viewer. Often on this blog I call the video rental store as a corner stone to my film education and feel without it I would have missed out on hours of mind numbing fun. Am I alone in my feelings for this well dead format? No I wasn't. It seems that in the last five years or so horror fans have become very nostalgic for these VHS`s and certain titles go for big bucks and are becoming harder to find. Like a good brain eating zombie, you cant keep these videos buried. And really would you want too?

Our special guest in the blog this week is the creator and editor of "Lunchmeat Magazine Josh Schafer which is a zine that you guessed it, is totally devoted to the retro horror and scifi VHS. Nothing main stream like Halloween part 20, just films that have never been on DVD.  Josh talks to Gorehound Mike and he sheds some light on the recent boom in Retro horror vhs! 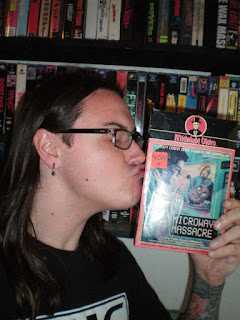 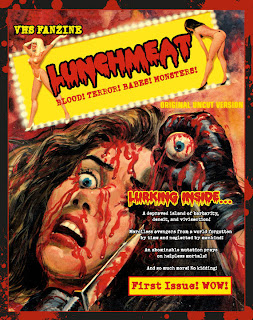 GH: What were some early VHS horror films you were drawn to back in the day?

LM: Oh, man… so many! Mother’s Day, Chopper Chicks in Zombietown, Mausoleum, Ghoulies, Return of the Living Dead, Bloody New Year, Mountaintop Motel Massacre, Play Dead… the list goes on and on. I found all these flicks at my local Mom and Pop video shop (RIP Video Vision – Bridgeton, NJ) throughout the 90s. Video Vision had aisles, but also had closed off, squared sections of flicks. Being surrounded by all those wild and vibrant covers, it’s a feeling I’ll never forget. It was like a rush of excitement mixed with an overwhelming sense of indecision. They were golden years.

LM: Well, I mean… I can try, hah. I think it’s just being more and more recognized as a viable medium to watch (and release) flicks. Stuff like Lunchmeat, the VHS Horror Collectors Unite group on Facebook, Massacre Video and Horror Boobs Video and Camp Motion Pictures releasing stuff on VHS again: it all adds up to a sort of movement to say “Hey, VHS is still here and it’s groovy!”. It’s been building for years now, I think. I feel like the community has been given more avenues to connect with each other, and this unites them and people notice when these things happen. Getting coverage in New York Times helps, too, hah! It’s akin to when punk rock started to emerge, I think. It had been happening underground for a little while, then people in more mainstream media talks about, then all of a sudden it’s real. But, yeah, I really think it comes back to a community and sort of movement. People notice when that stuff happens, and right now, there’s a really enthusiastic, active community in VHS collecting, preservation, trading, etc.

GH: How many are in your personal collection?

LM: Hmmm… I’ve never taken a count per se… but I would guesstimate about 2000+? I honestly don’t know. I have a ton, though. And I’m getting more all the time. I need more storage is what I need, haha. 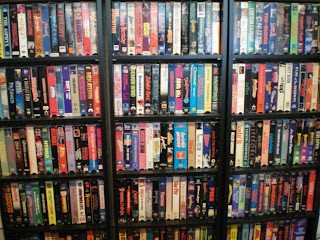 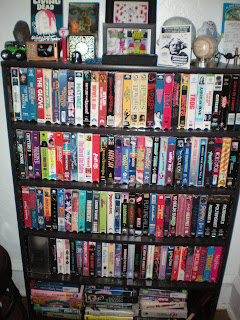 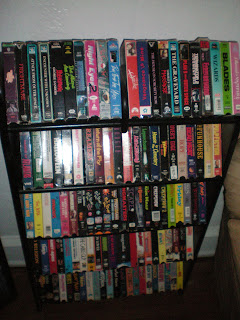 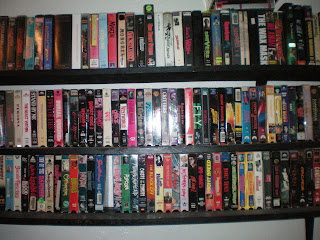 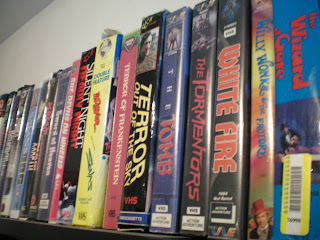 GH: Any personal favorites in your collection?

LM: Of course!! I always note Microwave Massacre on Midnight Video as a personal favorite, not only because of the personal connection I have with it, but also because the cover is so mega-kick-ass. My copy of Mother’s Day is also a personal favorite because it’s tied to great memories. City of the Walking Dead and Video Violence were some the first big boxes I purchased for my collection, and those are dear to me for that reason. I also think Video Violence is the first SOV horror flick I remember seeing and being like, “Oh, man, this was recorded with a video camera – this RULES!”, so that has special meaning to me, as well. Redneck Zombies was another SOV flick that was really, really early for me. Those are a handful my favorites sentimentally. I have so many favorites, though: The Gate, Bloody Birthday, The Asphyx, Lunch Meat (of course!) Chopper Chicks in Zombietown, Parents,… man, I could go on and on and on, really…. And that’s just horror stuff… I have a ton of other favorite movies that I own only on VHS just because that’s how I remember them, and that’s how I want to own and watch them… stuff like Willy Wonka with Gene Wilder, Little Giants, Land Before Time, Addams Family, The Sandlot, et al.

GH: You started Lunchmeat Magazine. Tell our readers what your magazines goal is and where can they pick up a copy?

LM: The goal of Lunchmeat is to champion the VHS format and cast light on flicks that are only available on VHS and show people a world of films they might never see if they don’t employ the VHS format. LM also features interviews with obscure, cult actors, directors and creative personalities, articles on video era related stuff and nostalgia in general. I want the readers of LM to see the zine as a sort of time machine, a nostalgia room, something that can open up their eyes to stuff you’ve never seen or maybe have forgotten about. Most of all, I want the readership to have fun reading it while learning about all the stuff I listed previously. In short, the LM mantra says it all: VHS is Happiness! You can pick up copies through the website: www.LunchmeatVHS.com – You can grab a copy on eBay and select groovy indie bookstores, too. If you have a sweet indie book or comic shop near you and they don’t carry Lunchmeat, tell them they should! They can contact me through the website! Horror oriented sites like GOBLINHAUS and HOUSE OF MYSTERIOUS SECRETS along with a bunch of others carry the zine, too!

GH: What is your holy grail of retro VHS horror?

LM: Well, I’m still looking for a copy of The Spectre of Edgar Allan Poe. That one would be amazing to have. I still need a Lunch Meat big box version. I would like to have a Last House on Dead End Street, People Who Own the Dark, Spine and a Frankenhooker talking box that still works. I think anything on Unicorn that I don’t have is something I crave. It’s basically all stuff I didn’t grab before prices started to get crazy. And since you asked this question, I have to say that my “holy grails” kinda change all the time, so I guess that means I don’t really have one per se? By that I mean I‘ll go visit my boy Earl or my boy Matt D. and they’ll have tapes and I’ll be like, “Oh, dude! I gotta have this!” and then I set my sights on getting my own copy of it. It can marinate in my mind, and sometimes, it’ll float to the top and I just gotta have it. So, yeah, it changes, but the ones I mentioned before are tapes that I’ve wanted for a while and haven’t been able to attain just yet… and I stress yet.

GH: Do you feel that retro VHS horror films are making a big come back?

LM: I feel like more and more people are getting into them, yeah. I also feel like people that have been into them for years are also getting more notoriety and more pulpits to speak from. I think companies looking to VHS as a viable format to release their product are also a big contributing factor. I think these are all good, good things for the format. In an essence, all I wanted to do when I started LM was to share flicks that were only available on VHS with people that still cared about that kind of thing. But in the progression of the zine and my own personal experience and opinion, I really want the notion spread that VHS was an indelible and huge impact on our society and it should be remembered for what it did, both for bringing a myriad of films into the home and also stimulating the world economy to an enormous degree. It was a veritable game changer. I think it’s important for people to remember that, and VHS making a comeback could make people start to think about it.

GH: Any tips for horror fans that want to start their own collection?

LM: I would say visit flea markets, dirt malls, yard and garage sales, Goodwills and Salvation Army stores as much as possible. Don’t be afraid to travel. Get involved in tape trading forums and groups online like Horror VHS Collectors Unite and network, network, network. Meet people that like the same kind of stuff you do. That’s a great way to find the flicks you’re looking for. Go through phone books and look for places that still have video in their name or might have rented VHS tapes one time in the past. Check out CraigsList for your town. Mention to people you meet that you collect VHS tapes. Chances are, they have a ton sitting in their basement just collecting dust. VHS are everywhere. You just gotta be on a perpetual hunt for them, haha. Of course, eBay and Amazon are extremely useful avenues to get your tapes, but you’ll pay the going rate for for them. I would say check Amazon first because people list stuff on there all the time priced to sell. You can get deals on eBay, too, but it’s less likely than on Amazon, I think. Also, for internet shoppers, check out tape lots. Sometimes there’s a single gem mixed in with a bunch of more common stuff and you can score that way. Just get physical, keep your eyes peeled and get involved with the community and culture. It’s more fun that

Thanks Josh for taking the time to share your passion. On a personal note Josh is a cool guy and his magazine kicks ass, so dust off that VCR and pick up a copy of his zine!! 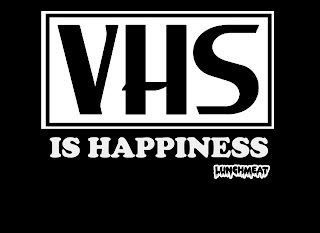 Thank you for crawling into my lair. Just remember the golden rule, be kind rewind or i`ll kill you! (EVIL LAUGH!! AWHAHAHAHA)

Posted by Gorehound Mike at 9:22 AM