No Jive Turkey!! Foxy Brown is in Da house!! 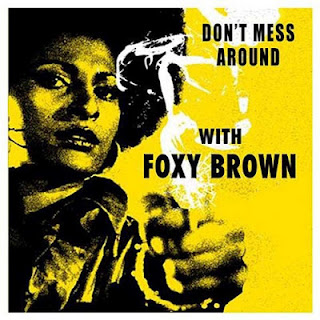 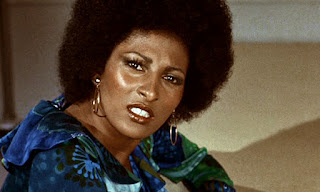 The mad genius behind the cult hit Spidarbaby brings us this film that not only defined the sub genre "blaxploitation" but really paved the way for a strong black female character.  The trippy over the top credit scene should give the viewers just a taste. Fans of 70s cinema will find much to love from this film. What can now be viewed as dated clothes, hairdos and lingo seems to just add to the charm and enjoyment one gets from watching this movie. Now I`m sure it was meant to be dead pan serious but it seems now its become a camp classic. But I tell viewers to give this a well semi serious look at. I say semi- serious because you cant help but laugh at the styles of the decade. This isn't to suggest this is a film just to mock. No sir, this is a bad ass film.

Move over Shaft -nobody kicks more punk ass fools then the stunning Foxy Brown brought to life by the amazing Pam Grier who is not just a bright star but a super nova. Without this fiery vixen we would not have such film heroines such as The Bride from Kill Bill and Amelia from the Underworld series. Ms. Grier proved that action star wasn't just for the boys. Tough as nails yet she is portrayed as a sensitive well rounded character. She can love you but if you piss her off, say goodbye to your dick! It helps that she is a total knock out and has such a presents, I would compare her impact on the screen of that of Marilyn Monroe. The cast is well rounded with many notable character actors such as Antonio Fargas who is better known as Huggy Bear from the TV show Starsky and Hutch giving a super fly performance as Foxy`s no good brother. Jack Hill`s go to guy Sid Haig makes a brief but fun cameo. Sid would later find a new following in the films of Rob Zombie. If you dig action Foxy gives us plenty. One great scene takes place in a  lesbian bar, which for the time was very risky. Lesbian bar fight, come on, what more could you want?  The violence is "gritty" for the time yet don't expect anything too gruesome. Having said that there is a nasty scene between Foxy and two skin heads. Blood and guts wise its tame. Yet I will say, there's a classic scene that I`ll only say will make the male viewers wiggle in there seats. This type of movie I don't mind when the splatter is light. Its not suppose to be a hardcore splatter flick.


This film has often ripped off but it seems nobody ever captured the magic and the ass kicking fun that Foxy Brown brings,  People seem to laugh this movie off, it wasn't cliche at the time. Yes its VERY 70s but I feel like while some people might feel its dated, I know many that find this the very thing that gives the film its charm.  So give this super groovy bad ass mo fo movie that is not only an entertaining look at a fly decade but more importantly blazed the trail for strong positive African american females. So don't gvie me no jive and check this flick out, yah dig?