The Innkeepers: Should I stay or should I go! 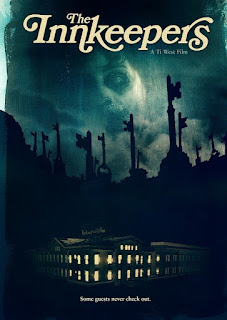 Ti West is an up and coming horror film director who in a short amount of time has been homing his craft for films that are clever and doesn't shy away from the gore. His films so far include The Roost, Cabin Fever 2 and House of the devil. His latest film The Innkeepers is a ghost film which is a breath of fresh air in a genre of crowded by zombies and vampires but is it up to the hype?

For me this was a mixed bag. The film weaves a rather basic ghost story. You have the classic story tale of a woman who was stood up on her wedding so she hung herself in the inn. To make matters worse to avoid bad press they innkeepers decide to hid her body in the cellar for three whole days until the townsfolk discover their terrible secret and makes them shut the establishment. And you guessed it she still haunts it. Ok first off couldn't we come up with a more interesting story? Doesn't have to be overly complex but at least something that hasn't been told a million times around a camp fire.

The acting ranges from passable to not very good. The doe eyed Sara Paxton performance was good but at times felt very stiff. I did enjoy Pat Healy.  The pair does have a nice chemistry together and I like that in the short amount of time Ti makes sure to leave room for the characters to be more three dimensional then most films these days do.

Most of the films credit is due to the wonderful way West fills a screen. Ti certainly has an eye for making his films visually exciting. He commands his own unique style, which is a much needed break in the age of flashy quick cuts and shaky hand held bullshit. The film reminded me of The Shining which is I guess impossible to escape seeing how its a ghost in a hotel. Though I never felt like it tries to rip it off. The use of chapters was also very cool. Perfectly fits with the film being a more classic ghost story.

My major problem with the Innkeeper is that it builds to something that never quite gets their. I was expecting a really disturbing show down between the young Claire and the bride ghost. Yet what we get is a whimper instead of a bang.  It seems like the end was rushed through. Innkeeper has very few characters in it but what hurts is that they are horribly under used. Perfect example,Leanne who is a former actress and now psychic. She is set up as a person to help Claire deal with the spirits, yes more then one three in fact. Well it turns out she doesn't really serve the story much at all accept to tell us that this place is haunted and that maybe a trip down that creepy dark basement isn't such a hot idea.. I tell yah folks you don't need to be a psychic to know that one. And when never do get to see any of these other spirits. Its not clever to set things up and not pay off, it just poor story telling.


While I would say this is not his best film by far, it is however still worth giving it a look at. I`ve read alot of reviews raving about this one and I just cant get past the fact that I was expecting so much more from the third act. Subtle is one thing but as a viewer I want the pay off. This still doesn't mean I`m not a fan of Ti`s but I got to be honest I felt that it suffers less from direction and more from just lazy writing. I`d stay in this Inn but don't know how often i`d revisit it.

Posted by Gorehound Mike at 7:09 PM