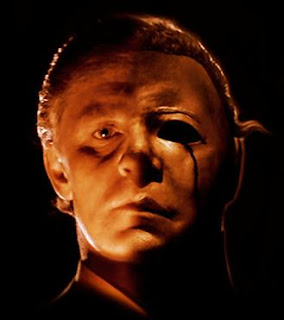 Dick Warlock is a Hollywood icon and stunt man. For  over four decades has worked on everything from Jaws to Spider-Man (2002) he is most known to horror fans as the slashing maniac Michael Myers. His trademark walk became a benchmark to all others who would don the iconic mask. Fans rank him right up there with Nick Castle as the ultimate Myers!And who could forget the explosion scene.  Despite being most known for a teen slaughtering mad man Dick in real life is the nicest guy you` ve ever want to meet. Gorehound Mike is very proud to present my one on one interview with Mr. Warlock

GH:  You started out as pro-skater. Did this in any way help in your career as a stunt man?

DW: Absolutely it did. Actually it was the upper armature level. When they wanted me to go they invited me to Hawaii on a team over there, well that didn’t work out because they wanted to only pay me $75.00 and to live in Hawaii was a lot more than that. Yah it helped me allot. I learned different ways of falling.  You went to a school to learn to do the roller derby, so I learned a lot there and I learned a lot Coregenville which was the first movie ranch that I worked at, the whole cowboy thing you know.

GH:  Your first major boss was no other then Walt Disney. What was he like to work with and what fond memories do you have of him?

DW: I loved Walt. I went in on a picture, for the opening called “Willy and the Yank” which starred Kurt Russel, I didn’t meet Kurt at that time. I was doing the opening of the television show with Walt. He use to do “Disney’s Wonderful World of Colors” and during the rehearsal he called me over and said “You’re not gonna up stage me, are yah?” I said “Would I do that.” And winked at him.  He smiled and I smiled and I turned and walked away. Well I didn’t know it till eight years later; I continued to work at the studio I thought, well they just like me. It was Walt that liked me He kept me there and the director of that I did with Walt told me eight years later, he said “Dick I want to tell you something.  I don’t want you to be disappointed but Walt wanted to make you a star. He has us get all the information, the background stuff of your experience.” I was disappointed because I wanted to be an actor, unfortunately   I can’t act anyone  who’s ever seen me, expect for Michael where I didn’t have to talk know I can’t act. Anyways it’s my kids deal, he’s an actor and he’s done very well at it.

GM: During your tenure at Disney you met a young man named Kurt Russel. What were your first impressions of him?

DW: A great kid. He was a really nice guy, very friendly, easy to get along with. I was roughly ten years older than he is and his dad is responsible for me getting in his contract. He talked to him (Kurt) one day on the set of “Now you see him, now you don’t” and his dad said you ought to put him (Dick) in your contract. He said I don’t know how to do that dad. Dad said I`ll take care of it. His dad was Bing Russel who was the sheriff one “Bonanza” He had a great career both as an actor and as a baseball player. So he`s the reason I got into Kurt’s contract and stayed with him for seventy five years, up until “Tango and Cash”

GH: In 1975 you doubled for Richard Dreyfuss in a little movie called Jaws. How did you get the job?

DW: How I got “Jaws” was a friend of mine who was another stunt guy by the name of Jessie Wayne who had doubled smaller people like Mickey Ronnie etc. Jesse was called in for the job because he was smaller to make the shark look bigger by using a small person in a small cage. Well Jesse in all honesty couldn’t scuba dive but he didn’t tell him that, he said I`m busy I got a good job but you can hire a friend of mine Dick Warlock he’s a certified scuba diver. I went in with the production manager and got the job doubling for Richard in “Jaws’.  We spent a week in the tank at MGM studios which was referred as the Ester Williams tank shooting that scene. That’s how I got the job doubling Richard. For a long time Dreyfuss didn’t want anyone to know he had a double. I remember on the “Johnny Carson” show he denied having a stunt double.

GH: Most of our readers will know you as The Shape in Halloween 2. Was it hard to get in and out of the Michael Myers character?

DW:Not really. I didn’t have an ounce of direction from anybody, I just did it the way I wanted to. What really hurt my feelings was when they came out with a 25th anniversary DVD version where they had they commentary at the end and Debra Hill said “Well he never did get the walk.” She was on set every day and could have said at any time such as “Dick let me show you how to move.” Either did Rick Rosenthal. I just did what I wanted to do. But they seemed to have liked it, because it’s become a fan favorite. Everyone says do the walk do the walk (laughs) so they like the walk.

GH:  This was the one and only time you worked with the lovely Jamie Lee Curtis. Have you seen her since socially?

DW: No, no unfortunately I haven’t seen Jamie. Someone asked about me doing one of the shows (conventions) and she said “Oh the stunt guy?” Well that was the end of that (laughs) I did get a call on Halloween: H20 to come in and replace Chris Duran. But they wanted my mask. That’s what they wanted. They didn’t like the way the mask fit Chris. If you notice the mask changes during the movie, that’s because they made another mask. They fans notice it.

GH:  Did Halloween 2 offer you any major challenges as a stunt man.

DW: No. It was more a challenge for Jack Verbois who played Ben Tramer, walking towards me in the street as I drove the police car. I didn’t go very fast at him; you can’t really do that without hurting somebody. There was a platform we built on the front of the car for Jack to step on. He took so many steps backwards and when he turns I`m there.  So it was a timing thing. But getting off the subject, no I had done fire things before.

GH: Is it surreal at times being part of a pop icon such as Myers?

DW: I can’t get over that. I`m still amazed, I sit at this table and people come and come and come. It amazes me that it can be so popular and I can be the person that’s that popular. But it’s the character that everyone loves. Its Michael Myers, everyone loves him, nobody loves Dick. I certainly appreciate it.

GH: Have you ever had to deal with nutty fans?

DW: Yeah, a long time ago I had a stalker guy who threatened Kathy (Dick’s wife) and I. Unfortunately   he died from a brain tumor.

GH: If the role of Michael Myers was offered to you again, would you come out of retirement to play him again?

DW: I couldn’t do that; I can’t do the walk anymore.  I`m too old, I’ll be seventy two in February. It’s time to give up the ghost (laughs) I`d love to work with John again. I`d also love to work with Tommy Lee Wallace again.

GH: Would you do a cameo in a Halloween film?

DW:Yes I`d love to do a cameo in a Halloween film.

GH: Of your vast legacy in Hollywood what would you most want to be remembered for?

DW: Two films Jaws and this one (Halloween 2) and being a nice guy.

Thanks to Dick Warlock for taking the time to talk to Gorehound Mike!

All Interviews are owned by its author Michael Vaughn and is copywrited, and should not be used in any other form. 2012
Posted by Gorehound Mike at 5:57 PM