Hollywood Monster: Alex Essoe Interview: She talks about her role in Starry Eyes and what shes working on next!

The horror market is flooded with mindless crap marketed to casual "horror fans" But even with the piles of reboots and remakes there has been a resurgence of independent film makers with unique visions.   Films like "What we Do in the Shadows" "A Girl Walks Home Alone at Midnight" and "Babadook" are clear evidence that some very interesting original ideas still indeed have a place with audiences.  "Starry Eyes" is certainly apart of this wave of smart horror. Not since "American Mary" and "May" has a horror film blew me away and really left me this impressed. I`m not going to review this as staff writer Vincent Deamon covered this brilliantly in a past blog. I recommend you read it if you haven't. Also this blog is Spoiler Free but I urge you to see the film if you haven't.


The star of "Starry Eyes" Alex Essoe gives a powerhouse performance, she is not only extremely talented but film savoy. Gorehound Mike's was lucky enough to chat with her about her role in this classic and what she has in the works.  Enjoy. 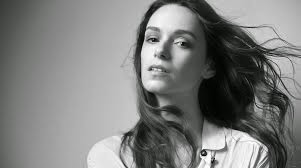 GM: What was your first impression of the Starry Eyes script?

AE: Love at first read. It read like a movie I would love to see, and the character of Sarah just lit me up. She came right off the page for me immediately.

GM: Are you a horror genre fan?

AE: Yup, horror of all styles and categories. Anything from a foreign art house piece like Calvaireor Hour of the Wolf, to an awesome sci-fi slasher like Alien or Event Horizon, to a literal nightmare mind fuck like Inland Empire or Beyond the Black Rainbow or Irreversible; there’s honestly too many to name, I love them all. 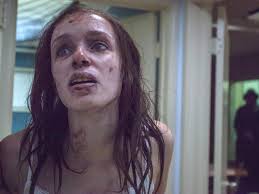 GM: Everyone who see’s you in this is blown away by the intensity you bring to Sarah, what was your process to get you to that place? Also was it hard to turn it off at the end of the shooting day?

AE: I don't usually feel compelled to discuss process, unless it’s in a general sense if I had to learn a specific skill, mostly because I think it sort of ruins the fantasy. Although I will say that my process was different depending upon which scene we were doing, and breathing and relaxation are tantamount no matter what. There was something about playing Sarah that I found cathartic, so it wasn't very difficult to let it go at the end of the day. We also had such long days with so many intense or physically demanding scenes that I wouldn't have had the energy to take it home with me, anyway.

GM: Your Father was disturbed by the Audition scene when he visited the set. Did they (your parents) see the finished film? If so what was there response to it?

AE: My mom actually flew to LA from Toronto to see a screening of it at the Egyptian .She told me she was proud of me and that I need to work on my posture. Moms. My Dad said he was impressed but I also told him to just watch the first 40 minutes (up to the pool scene). I'm a total Daddy's girl and I know the rest of the movie would freak him out. I'll always be 9 years old to him, no need to subject him to a naked lesbian make out/death scene (laugh) 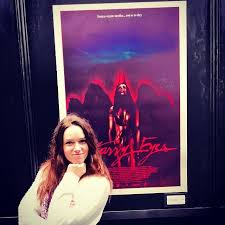 GM: Your Mother is a theater actor; did she give you advice on this role?

AE: For this role, no, but I also didn't ask her for any. That being said, she has been instrumental in my early development as an actor. Apart from growing up watching her on stage, and apart from attending the drama classes for kids and teens she taught, the techniques, books, films and plays she exposed me to and recommended to me have been hugely influential in how I approach acting.

GM: I`ve read that you enjoyed the makeup process, do you feel it helped enhance your performance?


AE: 100%. The makeup was so masterful and believable; it did so much to inform the role, especially the physicality. Even little things like the long nails or the chapped lips really aided me in getting lost in my circumstances.

GM: Was there anything in the script that was changed due to your input?

AE: Oh gosh, apart from maybe a line here or there I did what was written. Unless I feel that something makes absolutely no sense or is completely unjustified, I consider it my job to honor the writer's work, which was so easy with Dennis and Kevin.

GM: How true does this film ring in terms of the struggles of any artist to make it in this business?

AE: Quite true, indeed. I think anyone pursuing success in the arts, especially on a mainstream level, is beset on all sides. You need focus and drive as much as talent and a thick skin without becoming bitter. There are as many people who desire your downfall as are rooting for you, maybe even more. There’s instability, insecurity, rejection and doubt, but if you're prepared for this, and have a solid sense of who you are and what you want, I'm confident you can avoid a fate like Sarah's.

GM: Any strange or surreal real auditions you`ve been on?

AE: Honestly, no. Especially with the union, people generally play by the rules in this industry, at least nowadays.

GM: Since the film have you had much feedback from your peers in terms them being able to relate to aspects of your character’s strife?

AE: Oh totally, specifically in the beginning. Most actors I've spoken with know an Erin or a Danny, and PLENTY of them have wanted to pull their hair out after an audition .I also feel that most actors are lone wolves by nature and have an innate sense of feeling separate from healthy ,civilized society but maybe I'm just projecting...

GM: What are you currently working on?

AE: I'm about to go to Vancouver to do a feature. It's has an Antichrist meets Vinyon or Under the Skin feel to it so I'm really excited for that. I also have a movie coming out called Tales of Halloween that hits theaters on October 16th! 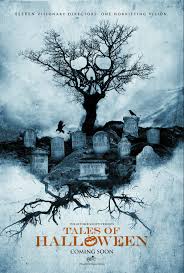 GM: Finally any advice for our readers who want to became an actor in film?

AE: Train. Try all the techniques you can but make sure you research the school or teacher before you sign up for anything or give anyone your money. A lot of classes, even at "reputable" schools are rackets that will suck aspiring actors dry without giving them safe or effective training. Ask questions all the time. Try different things; the more varied and diverse your training is the more tools you'll have, making it easier to develop your own process. If you're just starting out, audition for and work on whatever you can- shorts, student films, commercials, background-the training is for nothing if you don't leave the classroom and apply what you've learned. Which brings me to another trap: teacher worship.You need to put your trust in your instructor but you also need to trust yourself. The purpose of class is to prepare you for work in the real world, not to be the class star, and a good teacher will teach you how to be self-reliant. There's a difference between a mentor and a guru. Know when to leave the nest. Do theater! Do it. Theater gives you a skill set that you won’t get with on-camera acting. It’s a workout for your voice, body and storytelling ability in a very different way than film. I find my theater experience has been invaluable in strengthening my acting muscle.

I want to again thank our special guest Alex Essoe for taking the time to chat about her amazing role and we all look forward to the amazing things you`ve got in the works.