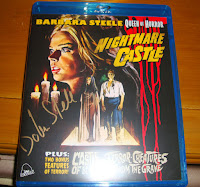 Shes worked with Fellini, Corman Cronenberg and so many others. The pale skinned beauty with fiery seductive eye cheek bones that could kill, Barbara Steele rose from a time when men dominated the horror landscape. With hard work and talent she has rightly taken her place among horror icons like Price, Cushing, Lee etc.To honor her legacy of terror Severin has released not one but three classic Barbara Steele movies on blu. But how do they stack up and are they worth adding to your haunted collection?

The Film: I had never seen "Nightmare Castle prior to this release so I wasn't quiet sure what to expect. Even with lots of plot holes and some needlessly long scenes, it still manages to be campy fun. Its also really helped by some beautiful cinematography, great surreal moments and violence ahead of its time. It also boosts a score by the legendary Ennio Morricone who of course would go on to do great work for Sergio Leone and Serigo Corbucci Dario Argento among others. Non fans of this type of horror might not be into this but fans of classic Gothic horror will find this a tasty treat, flaws and all.

Picture: Nightmare Castle is presented in a 1080p HD res. I was totally blown away by how great Nightmare Castle looks. At fifty years old this year I can say its probably never looked better. I`m not sure but i`d go out on a limb and say this was a 2k scan from the negatives. Its stunning. There are a few flaws later in the movie but I have a feeling it was something that couldn't help. It really doesn't detract or take away anything. Severin out did themselves in terms of picture.

Extras: A nice featurette "Barbara Steele In Conversation" is a great 30 minute over view of Steele talking about her very interesting film career. Its very candid and she has some wonderful stories to tell. The crown jewel in the features is the commentary with Barbara Steele and David Del Valle. It is wildly entertaining. Del Valle is armed with wit,fun trivia and well researched facts and you can tell they are having a good time recording it. There are also a some cool features for Castle of Blood and Terror Creatures from the Grave. We have deleted scenes from Terror Creature and a featurette "Vengeance from Beyond" and "A Dance of Ghosts" featurette. Rounding out the features are trailers for all three films as well as US and UK trailer for Nightmare Castle. I was most impressed that they included features for the other two films as well, which shows just how they went above and beyond for fright fans.

Overall: Severin has really out did themselves with this release. We get treated to not one but THREE great films starring the dark diva looking beautiful in HD, along with a host of great new features including rare insights by Ms.Steele herself in both interview and commentary form. But they dont stop there, they include several features for the bonus films as well.  I would put this on my short list for best blu release of 2015. A highly recommend bringing these classics into your haunted castle and adding them to your film library.
Posted by Gorehound Mike at 12:51 PM