The Gardener: Green thumb up its own ass! 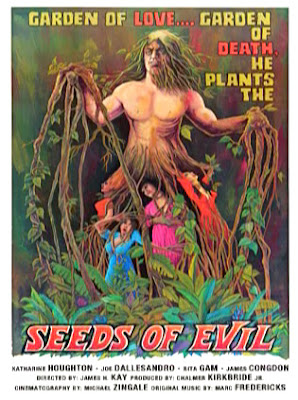 GRAB A SHOVEL AND DIG UP A FRIEND!!!

Gorehound Mike here. I was just in the back of the castle planting some Venus fly traps for those pesky children snooping around. Yes you didn't know I had a green thumb did you?

Title: The Gardener aka Seeds of Evil aka Garden of Death

Gardens and evil, the two don't really seem to fit one another. But it being a strange concept, and being one for the weird and the wild I thought why not.So i took a frolic in the garden of sinful delights.

Well folks it was not a delight in the least.

A rich couple living in South America hire a gardener to spruce there sparring estate.  They hire a shirtless gardener named Carl (Joe Dallesandro) to do the job. Soon things start growing in rapid speed, almost in a supernatural way. But soon things start growing between the gardener and the lady of the house Ellen (Katharine Houghton) and a budding flirtation goes on. Things get strange when Ellen finds out that everyone who hired Carl is no pushing up daisies. Even the help try and warn her that something is wrong with him. What is the evil secret that the gardener is hiding. 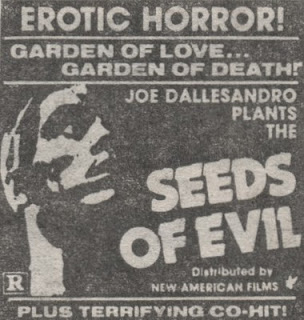 I`ve done it! I discovered the cure for sleeplessness! Its not in pill nor drink form. Just pop this film in and you`ll be soon on your way to dream land. Yes its that dull.  I mean I was out like a light half way through the second act. The film takes itself way to serious and is played out like a soap opera rather then a horror film. I mean its a horror film,there should be a certain level of fun. It does take a certain amount of balls to say, look im going to take something harmless and pretty like flowers and make a horror movie around it. I would have given anything to have been at this pitch session. So with this concept was this film doomed to fail? Actually I think not. With the right writers this could have been a weird little gem and a cool concept.
The violence is as tame as the flowers themselves so don't expect too much gore and mayhem. And the effects are cheesy as you`d might expect. 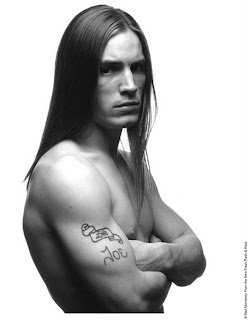 The cast is not stellar either. With the only real "stars" being Joe Dallesandro (who I admit is main reason why I even rented this flick,aside from the strange plot) and Katharine Houghton (Katherine Hepburns niece)


Oh Joe I do love you in films but face it, your terrible.

When I think of a good sinister character actors many names come to mind, but little Joe is not one of them and that also hurts this film. He`s just screen beef cake plain and simple. He does have a nude scene but of course you don't see anything.
If screen eye candy is what the filmmaker wanted, it was what they got.

The rest of the cast is just lackluster and they seem like they are are struggling to get through it,but given the uninspired script they had to work with its no wonder.

In the giant cinematic garden there is so much to choose from. This my friends is not one i`d run out and see. This film doesn't even have campy dime store charm, which is what normally saves these kind of Z-grade films.

If your looking for fresh flowers you might be disappointed, because all you`ll end of picking is a bunch of weeds, not unlike what you`d need to be on to make it through this film.

Ohhhh look my fly trap already got a girl scout.