In 2007 Balaguero made a huge splash with fright lovers with his master piece of horror [REC] and its two sequels. Flash forward 2011 he brings us Sleep Tight, and folks you`ll sleep anything but after seeing this flick.

The film follows the life of Cesar a desk manager at a up scale apartment building. He always has a smile on his face. Turns out he is anything but the happy person that residents think he is, in fact he cant feel happiness at all. That is until he found a hobby that has brought meaning to his life. Stamp collecting,building models-no, his fun is making his ever happy tenant Clara miserable. With access to all the keys Cesar creeps into her apt at night. At first its small things like messing with her skin cream but soon it escalates to more disturbing things. In addition to breaking into her home he has been sending her dozens of strange love letters and daily text messages. But when Clara remains happy even through Cesars torment, he decides to step up his game, with deadly consequences. After its all through nobody will be sleeping tight. 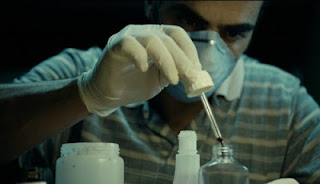 Wow I was totally blown away. Like [REC] Jaume Balaguero has weaved a masterful story of terror and suspense. He takes the moments when we are most vulnerable like alone and sleeping and creates a walking nightmare of dread and sexual perversion.  I love how Jaume plays with the old childhood fear of the boogeyman under the bed which takes on a whole new meaning in Sleep Tight.

Cesar is the ultimate sociopath, he takes the power and the trust he is given and perverts it to his own sick ends.  The most disturbing thing is, hes not a snarling raving maniac-he could be anyone. Like Travis Bickle in Taxi Driver Cesar is a alienated loner who us the audience watch spiral into a void of blackness of his own creation. Jaume is wise is not making him sympathetic. There is no feeling sorry for Cesar, he is a monster plain and simple.

Major credit goes out to Alberto Marini for writing a skin crawling screenplay that is both believable and well balanced. He knows how to just go far enough without getting silly or too over the top. His characters are fleshed out and the story is gripping from beginning to the pulse pounding ending.

If I had to pick one subtle yet disturbing moment it would be the final meeting between Luis character Cesar and Veronica (played wonderfully by Petra Martinez) What starts out as a friendly exchange turns into him totally mentally breaking her down, all with maintaining a calm and cold disputation.  It echoes the need that he has to suck all the joy out of someones life in order to give him pleasure.  I just cant say enough good things about this extremely well written screenplay.

Whats a great script if you dont have the actors to bring it to life? Well it just so happens that cast is settler! Luis Tosar and Marta Etura play Cesar and Clara. Both are already well respected and established actors. Tosar walks a razor edge of normal guy and psychopath and really makes it believable. Not to be out down Etura turns in a well acted and subtle performance as Clara, Cesar`s victim. They both basically carry the entire production and do it brilliantly. Supporting actress Petra Martinez (Bad Education) has a small but well acted role as a elderly tenant with dogs.

Jaume Balaguero already proved himself to be a force to be reckoned with in the horror genre and with Sleep Tight I hope hes here to stay. It just goes to show you that to make a disturbing film you don't need gimmicks or gallons of blood and guts, just a smart suspenseful script filled with well rounded complex characters. This film will not only gets under the covers but it`ll get under your skin and not leave for days. So "sleep tight" don't let the creepy bald guy bite!!