Chasing Sleep: The Title Says It All 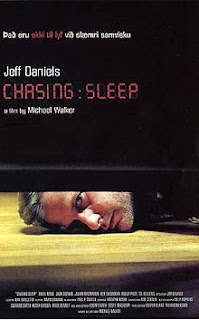 Sometimes I think Gorehound Mike has it out for me. Seriously. When asked to review this film, he bestowed the vaguest of caveat's upon me: "Well, I tried to watch it but just couldn't get into it." Now, being as the Boss Man and I have some differing tastes on what we like within the genre, and our varying preferred subgenres, I paid this warning little mind.

Boy, was I wrong.

This endurance test comes to us from 2000 and stars Jeff Daniels. It's about a man, a "failed" writer-cum-college professor, who wakes up to find his wife missing. Sounds simple enough a premise, and it actually is. Throughout the course of the film he deals with emotionally flatlined law enforcement, a hot 90 lb student with seemingly alterior motives, and the slow shutdown of his own psyche. It all sounds far more interesting than ity really is.

Jeff Daniels wears his best and most confounded Dumb And Dumber-type facial expressions, and meanders mechanically confused, from scene to scene, never outwardly too upset about his missing wife. Every character he comes across, including himself, pops pills of varying kinds like they were pez. Throughout the course of all this we come to find that everyone he has encountered is essentially an hallucination (which continue in incresing absurdity, until the top-off involving a frightening and deformed grown human sized infant), and that he is batshit crazy and probably killed his wife. The end.

The filmmakers really try here, and that much is obvious. However, it's what they are trying to be that gets annoying. It all sort of comes off like a poor man's David Lynch. Some of the cinematography is interesting, but I had the film figured out within minutes. Lots of focus on plumbing, dripping pipes, etc., and I can't tell you why (spoiler reasons), but if you watch you'll figure it out pretty quick.

But what ultimately makes this film a fail is the brutally slow pacing, the ultra-flat acting (which may be deliberate at points, if not altogether so), and the fact that it really tries way too hard to be something different and, dare I say, artsy. In the end that all comes off as a fascade, and you are left with a bland and disappointed "oh" kind of feeling. Apparently this film won a couple of festival awards when released, and was nominated for several others. I remember 2000 (vaguely, anyway), and I remember the cinematic output being fairly subpar during that period. So who knows. Actually, this reminded me a lot of another similar (and far better) film from 2000 as well, Mark Hanlon's Buddy Boy, which I highly advise you go seek out and watch.

I cannot say the same here. For me, Chasing Sleep was slow. Endurance test slow. I saw what they were attempting to do, and how they try, so hard. But for me it just falls flat on every possible level. All in all, I'd have to give this a pass.

---- Vincent Daemon's short fiction has appeared in 25 publications, and he just put his first short story collection together, Bury Me In A Nameless Grave. He is also editor of the annual Grave Demand magazine, as well as a freelance editor for hire in his down time, and occasionally performs with various punk/deathrock bands. Vincent can be found on facebook, and at his blog The Writings Of A Depraved Mind http://vincentdaemon.blogspot.com/?zx=c2884c7b8567b656 , and contacted at vdaemon13@gmail.com ----