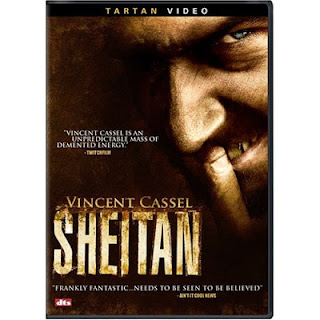 I absolutely LOVE this movie. It's just bonkers . . . completely off the wall.

Three friends are gathering right before Xmas in a rave club, one of which drinks way too much. They get thrown out, but manage to bring two girls with them. The one girl offers them to stay at her family's farm house.

Once there, their car get stuck in some mud when the stop to let sheep and goats cross the road. A strange man appears, Joseph (played by a hulking, almost unrecognizable Vincent Cassell). With piercing eyes, a goofy mustache, and a perpetual creepy smile, Vincent Cassell completely excels in this performance, and ultimately makes the film. His Joseph character is absolutely one of a kind in the analls of not just horror cinema, but the whole damn history of film altogether.

Once at the house things only get increasingly bizarre by the second. They find out Joseph is a doll and puppet maker, and the house is filled with these odd and frightening toys.

Joseph incites them all to a hot spring. They go skinny dipping, and are eventually joined by a group of mentally challenged hooligans who proceed to jump in and creepily rough house. Another girl shows up and starts to jack off Marc's dog, then pulls a hanful of Bart's hair out. That hair is then later used on a doll by Joseph's wife.

The film progresses in this odd direction, as tensions between the friends (the males all fighting over the two chicks), the family, and the Xmas holiday all begin to unfold and play out.

At their Xmas dinner, a conversation about religion, and subsequently evil, erupts at the table, ending with a drunken, now raging Joseph going off on god, the devil, and a brutal racist tyrade. 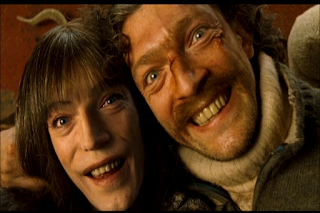 From here on out all hell breaks loose, culminating in some of the funniest, most brutal climaxes I've seen in a while. I can't really go into too much without giving the whole damn movie away. I will say that it does feature one of the gooiest, (deliberately) laugh-inducing birth scenes I've ever seen. The film as a whole in fact is relentlessly entertaining and bizarre, and not really comparable to anything else. It continuously finds little ways to puch the limits, up the ante, and go a wee bit over top, whether it merely be through the acting or the strange plot that turns everywhich way you can think of and then some.

The film is a funny, off-putting, intense entry from the New French Extreme (of which I am a big fan) movement. At 90 minutes it moves with a lightning pace, and may leave you a bit winded with that "what the fuck did I just watch" feeling after the fact.

It's currently streaming on Netflix, and makes a great Xmas film. Go, seriously, check this hidden gem out. You won't be disappointed. It is in French and subtitled, just a caveat for those half-assed horror fans who may take issue with such minor frivloities.

And Joseph's piecring stare, silly moustache, and creepy smile, will stay with you for DAYS after you watch.

SHEITAN is a true Xmas treat.

---- Vincent Daemon's short fiction has appeared in over 24 publications, and he just put his first short story collection, Bury Me In A Nameless Grave: A Collection Of 11, together to get published. He is also editor of the annual Grave Demand magazine, as well as a freelance editor for hire in his down time. He can be found on facebook, and at his blog The Writings Of A Depraved Mind http://vincentdaemon.blogspot.com/?zx=c2884c7b8567b656 , and contacted at vdaemon13@gmail.com ----

Posted by Gorehound Mike at 7:29 AM