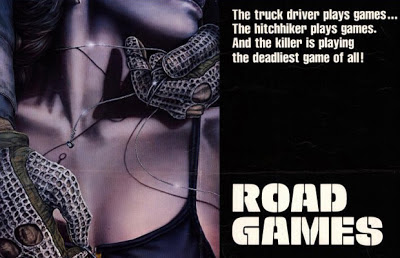 Welcome to the second part of my series on Hitchcock inspired films. This time were going to a land down under with this interesting take on a Hitchcock classic. 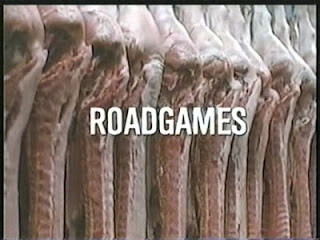 The film follows Quid and his traveling companion dingo Boswell on the lonely roads of Australia. To fight the boredom of the road Quid plays games to keep his sanity but soon discovers there's another driver playing a far more deadlier game-preying upon young women. Along with the aide of hitchhiker Pamela  they must play a frightful game of cat and mouse. But can they stop the killer from making rib roasts out of more young women?

Unlike BODY DOUBLE, Road Games isn't as literal in its homage, but its still has deep roots in the Hitchcock style and has been called REAR WINDOW on wheels. 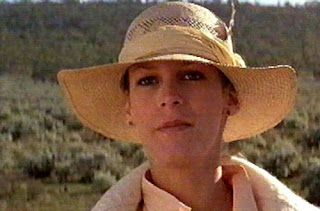 Stacy Keach plays the quirky road weary trucker and really gives a great performance. He lets the audience really connect with his character and there for we want to invest the time in his plight. Keach also knows when to rein myself in and not go over board or "hammy".

Not to be out done is the scream queen herself Jamie Lee Curtis. Its very fitting that Curtis star in this homage to the master of suspense. Her mother Janet Lee met her fate in the all so famous "Shower" scene in PSYCHO. Curtis is of course stunning as always and does a great job. Like a good Hitchcock female she is very stylish. She brings a kind of playful innocence yet shes a smart female character that ultimately helps solve the case.  The two have wonderful on scene chemistry which is odd considering they seem like such an unlikely pair. But hey it works.

Besides the casting of Curtis there are a few other fun nods to the famed director. The most obvious one being Pamela the hitch hiker is given the nick name "Hitch" which has a great double meaning, hitch as in hitch hiker and you guested it Hitch as in Hitchcock. Even Hitchcock himself makes a sort of cameo.

Their is a great mixture of dark humor that Alfred himself would have enjoyed. For example Franklin takes gleeful joy in playing with the butchered meat theme and is echoed through out the film and its shocker ending. "Today's pig is tomorrows bacon..." as Curtis so brilliant puts it. Scenes between Keach and Marion Edward`s is also pretty funny. 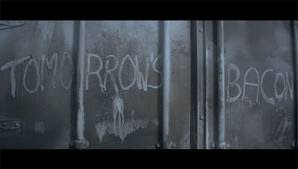 This film uses its locations to there up most effectiveness. Its cold brutal isolated Australian wilderness serves as a great setting and it takes little effort to imagine all sorts of things to happen in the wild outback. Its everything a good exploitation film should be, down, dirty and gritty. 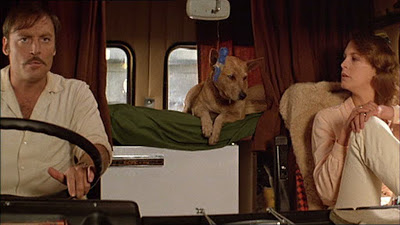 What Franklin has created here is a tight wire of tension that builds and builds and doesn't let up to the very last frame. And might I add without spoiling anything, the final scene will like you jump. It makes one wonder if this film semi inspired the film WOLF CREEK in its tone (yes i know its based on "true events")

ROAD GAMES is an endlessly enjoyable mystery thriller mixed with dark humor. It might make you think twice about taking the trip to Outback.


Trivia: Jamie Lee Curtis`s character is named Pamela. This is the name of Hitchcocks daughter.

Stacey Keach actually learned to drive an 16 gear semi truck for the film.

Things to look for: A Hitchcock book can be seen in the truck.