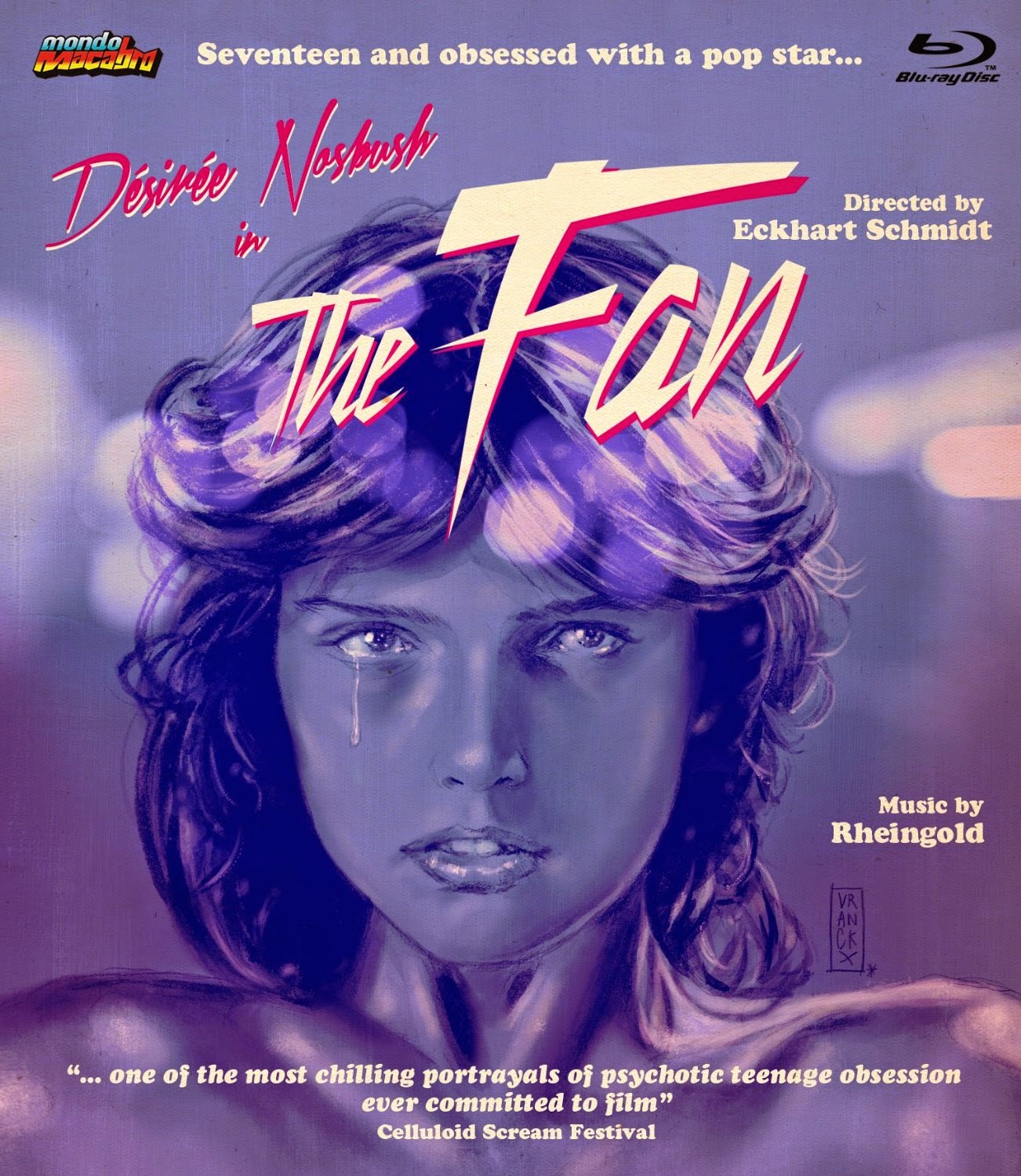 I`ve been a long time fan of Mondo Macabro and its because of them my whole cinematic world has opened up. As a fan you`ve haven't lived til you seen titles like
Mystics in Bali, Lady Terminator and Jess Franco classics. They give you a peek into the weird wild world of international horror,cult, action etc. Recently they have dipped their toes into the world of HD Blu and I couldn't be happier. So when "The Fan" limited edition came out I snagged a copy right away in a total blind buy. I knew nothing about the film before hand and I normally try to go in fresh when I review a film. What I got was a very disturbing look into one girls dark obsession with a pop star.

The Plot: Simone is in love with her favorite pop idol "R" and he loves her to, only he doesn't know it yet. What starts as harmless letter writing and hero worship quickly spirals out of control when she becomes more and more detached with the world around her. She stops going to classes and when she doesn't get a reply from R she starts dreaming up paranoid fantasies that the postal service is stealing her letters. Frustrated that he`s not reached out to her she embarks on a journey to see him in person. Its only when she meets her love things get really out of control. Are the two meant to be or is it a case of fatal attraction?

Eckhart Schmidt really taps into the world of hero worship and how it can go from innocent enjoyment (which is how most of us handle it) to something dark and deadly. In the post-internet celebrity obsessed culture we live in its very easy to see something like this happening,which adds an even more disturbing and timeless feeling to "The Fan". Schmidt is clever in showing us the progression of Simone`s already fragile frame of mind instead of someone who was already foaming from the mouth crazy.

What struck me right away was the cold clinical way the filmmaker views his characters and the story which really amps up the feeling of creepiness. It really adds to the detached feeling that the main character feels. Speaking of characters none of them are very likable and everyone seems to be out for something (even when hitchhiking Simone is sexually attacked) This statement shouldn't suggest that I dislike the film, quiet the opposite, even though the characters are scummy the plot is compelling enough to make it entertaining.  While were on the subject of cold scenes, the sex in the film has got to be one of the strangest due to the lack of sexiness or an ounce of warmth or feeling. I felt like taking a long hot shower afterwards.Visually this film is amazing, you will notice that when the film starts the colors are bright and very natural but as the film gets darker story wise so does the color scheme. A brilliant touch by the director.

In terms of tone its hard to compare it to anything else but if I had to "Ms 45" comes to mind. But after re-watching this I`d say "The Fan" has the edge over "Ms. 45" in sheer brutal,dark and disturbing subject matter and for a film where only one person dies that's saying a lot. It just goes to prove that you don't need a huge blood bath body count to make a unsettling creeper of a film.

Since this is a movie about a pop idol, the music is worth mentioning. The music is done by a group called Rheingold who at the time were a big deal in their own right. The music fits the film like a glove and its hard to think of anyone else doing it. I`d actually like to check out some of the other work they produced. Much like the films color scheme changes towards the end of the film so does the switching from the pop music of "R" to a more haunting score.

In an age where pre-teen girls still whip themselves up into a frenzy over someone like Justin Beiber its not hard to imagine this really happening which makes the movie all the more frightening. The Fan gives the audience an uncomfortable and engrossing look into the mental state of one teenage girl that climaxed in an ending you are unlikely to forget.

Once again Mondo has not disappointed in terms of presenting a strange film from another country.