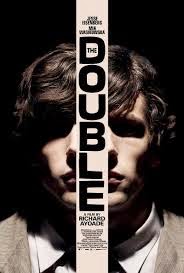 While looking for a movie to rent I came across "The Double" the plot sounded interesting and the label Magnolia normally has some pretty weird indie films so it seemed like good or bad it would sure to entertain. I kept my expectation low but seeing how it was directed by the brilliant comic actor/director Richard Ayoade I knew I was in for something different. Oh boy was it ever.

I recommend this film- with reservations. Like early Argento this film is based on something called "nightmare logic" in summary don't look for anything steeped in reality because like a nightmare it plays by its own set of rules. Some viewers like myself will love this and let themselves be swept away by its walking nightmare of set pieces. While others could become frustrated by it if they are not familiar with this form of cinema. A lot of David Lynch`s films are based in this nightmare world. So decide which camp you fall into before seeing this film. 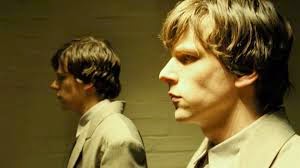 Simon is a feeble young man, just another faceless cog at his job. While he is a hard worker he seems to just fade into the background.  He lives in a world of isolation, no real friends, a mother that loathes him and the girl he loves doesn't seem to know he exists. Basically nobody seems to know he exists. But his world is turned upside down when a new employee joins the work force that looks exactly like him in every way. Soon he worms his way into Simon's life and takes over, replacing him.

What makes The Double so powerful is how its relate able the Simon is. Ayoade captures the character so well, his loneliness and trying so hard to improve his station in life both at work and his personal life. We really want this guy to come out alright because we can see aspects of ourselves in him. It also taps into some primal fears like death and ultimately being replaced and forgotten about never making our mark in life. Simon whose played by Jesse Eisenberg does a nice job of both playing the tortured character as well as his evil James. People that bitch about his acting needs to realize how hard it is to not only play a character like Simon but also play his alter ego James and juggle between the two.  Hannah the object of his love is played by Mia Wasikowska and though she plays things very wooden it actually works for her character. She isn't written very likable which is my one complaint about the film but more about that later. Wallace Shawn whom is best known for his role in Princess Bride is perfect as Simon's boss. Chris O Dowd has a funny cameo as a nurse. Film fans will also notice a lot of interesting actors like Noah Taylor, Cathy Moriarty (Raging Bull,etc)

The world of Double is equally interesting. Though it never says (wisely) the audience is to assume by certain clues that the story takes place in a future or possible alternative past/future. Its dated technology and unknown currency helps lend to the strange feel. Like Blade Runner its the future but a broken down one.

Is this a perfect film no. While I enjoyed the writing I thought Hannah`s character was not very appealing which makes you wonder why Simon would pine for her in the first place.

Visually this film is stunning and without the style that the filmmakers took great care to craft this would have been a total wreck. David Crank is the production designer and his past film credits are small but very impressive (Lincoln, Hannibal, There Will Be Blood etc)  I love the color scheme an example is inside the agency Simon works at. The cubical area has this weird yellow hue that makes it feel like a very oppressive place to work. Another scene that just floored me in terms of pure nightmare was the midnight funeral which is something you`ll likely to forget, as it stuck with me days after.

While this isn't a film for everyone I think its worth a look at. I really hope this film finds its audience and takes it place as a future cult classic.  Currently streaming on Netflix.

Posted by Gorehound Mike at 1:41 PM