Films in the Attic: Fear No Evil: I was a Teenage Devil! 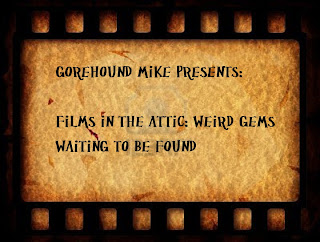 High school, its hell and in this film it literally is Hell! A weird little film shows us that you cant skip school even if your the Son of Satan! 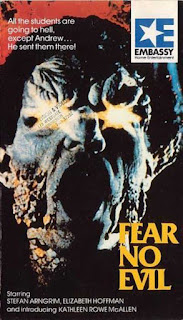 I guess even the son of the Devil has to go through the growing pains of youth and High School.  Lovers of the normal blood soaked fair be warned this is far from your typical 80s teen horror film, and that is why I love it so much. The lighting,camera angles and use of a well placed fog machines really gives this movie a creepy European vibe. It just goes to show you that even on a smaller budget you can create nice atmosphere The film does not shy away from nudity, and actually its mostly male nudity which is far from your normal horror film. Its really interesting that it shows how rising a evil child can really drain and suck the love and life out of the parents who unknowingly had to raise this Satan spawn. A detail that is unique to the sub genre and worth a mention.

Now I`m certainly not faulting this film for being to smart for it own good but it gets a bit thinky and could be over whelming for a viewer not use this this kind of horror film.It may take a second view for you to get everything. The pace could be brisker but there is a good amount of character background to get into. I totally get if your mainstream horror viewers would not dig this, but I think if you give it a chance, it might grow on you. If the story had a flaw I would say it seems to get so into the religious aspect of it forgets to just have fun with the horror elements.

The soundtrack is awesome, with music from The Sex Pistols, Ramones Talking Heads etc! If i was a teenage son of the devil this would be a nice soundtrack to rock out to while planning to take over the world.

Now this film is far from being perfect, the make up effects are at times cheestastic and towards the end of the film the Devil incarnate starts sounding and acting more like a whining goth kid rather then the mighty Anti-Christ. This movie has some blood but seriously lacks any real gore, yet I think this movie is aiming higher then just soaking the audience in the red karo syrup. However when they do use blood they do use it in a weird and disturbing way.

The fact that I film like this could be put together by a young man not even in this thirty's really impresses me. It may bog itself down with the religious aspects I give it alot of respect for trying to break out of the mold of other similar movies such as The Omen or The Exorcist. Maybe not the best film you`re likely to see about a teenage son of Lucifer, it does however remain interesting and strange enough that in this final exam it gets a passing grade.

Frank read my review and had this to say.....

Hey DUDE! WHaT The **** is THIS! You musta been smokin' some doggie drenched weed to attually like dis! if i were the dierector i'd go back to makin peezas!
-Frank LaLoggia

Posted by Gorehound Mike at 5:47 PM