Author Of: The Complete History of Return Of the Living Dead" Christian Seller Interview! BRAINS!!


DO YOU WANT TO PARTYYY!!!!!
Break out the boom box, put on those leg warmers,spike that mo hawk up and take a trip back to the cemetery!

Return of the Living Dead is one of those rare movies I can watch over and over and over and still never get tired of it. While I was born when the movie came out, I discovered it from my local rental store-the corner stone of my film education at the time. My best friend at the time and I would stay up late, eat junk food and watch horror films and this was one of our favorites. Oh fond memories. I normally will post a plot summary and review but I`m assuming that everyone reading this blog knows the plot and is well versed in the film. 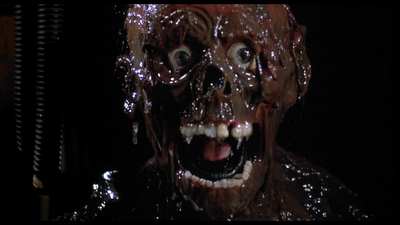 Gorehound Mike`s is proud to have Christian Sellers to talk about his book,zombies and whatever else hes got in works. You could say I was picking his BRAINS!! 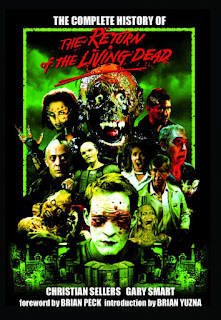 Christian Sellers is the author of " The Complete History of Return of The Living Dead.  This books is the final word on the series and  It should be on any true film buff`s bookshelf. Sellers and co writer Gary Smart has painstakingly compiled interviews, rare photos, documents with great colored photos. You can really tell that the book was written by fans and a labor of love. Sellers was kind enough to take time out to talk to Gorehound Mike and hopefully he`s going to survive the zombie infested lair he`s found his way into.

GH: Besides Return of the Living Dead what other films have inspired you in your career as a writer/critic and all around crazy person?

CS: “Growing up in the ‘80s I was surrounded by slasher movies, zombies, creature features and all kinds of splatter. John Carpenter, Joe Dante and Wes Craven were at their peak, Friday the 13th and A Nightmare on Elm Street were churning out sequels like a production line and prosthetic effects and animatronics were really coming into their own. So for a kid who grew up in that environment, I think it was inevitable that I would grow up obsessed with horror. My passion as a kid was always slasher movies and I still have a soft spot for them, but as I grew up I discovered giallo, which had a profound effect on me. I also liked the ‘get out there and shoot it’ attitude of Roger Corman and Troma, so my tastes have always been somewhere between tasteful and schlock. Perhaps that is why I discovered Return of the Living Dead; in some ways it is stylish and intelligent, yet in other ways it is gruesome and unnecessarily sleazy. The best of both worlds!”GH: Do you feel like you could survive a zombie takeover?

CS: “Depends on what kind of zombie. If it was a Romero outbreak then possibly, as they’re slow and pretty dumb. Every now and then you get a smart one like Bub or Big Daddy, but for the most part I was amazed that people actually allowed themselves to get caught. It was usually through a character’s own stupidity that they would die, but I think modern audiences have become wise to this. If you watch a movie like Zombieland or read Max Brooks' excellent Zombie Survival Guide then they give you tips on where to hide, what weapons and food to carry and when to try and escape. In most movies zombies are slow, but the mistake people tend to make is that they allow themselves to get cornered. One Romero zombie is easy to outrun but a whole army of them and there’s no escape.On the other hand, if I was trying to survive a Fulci zombie outbreak then that would be a whole other matter. His zombies tend to have supernatural powers as they are heavily influenced by Lovecraft, and so the evil doesn’t even have to manifest itself physically to cause harm. Just look at City of the Living Dead, a woman literally throws up her guts by will alone. And if you are unlucky enough to get cornered by a Fuli zombie there is no chance of getting away. Out of all the different types of zombies they are the ones that always scared the crap out of me.”
GH: Besides the book do you write for anyone else?

CS: “Over the years I have worked for various magazines and websites. I first started out with a magazine that I was with for about two years, but more recently I just do freelance as a way to keep me interested between projects. I wrote a few articles for Paracinema over the last year, one was on the spaghetti western Four of the Apocalypse and another was on the Sam Raimi/Coen Brothers caper Crimewave. Before that I contributed to a couple of early issues from Shock Horror; I did an article on the Italian movies that were labelled as ‘video nasties’ during the 1980s and also one on the making of the Hammer classic Plague of the Zombies. Aside from magazines, I’ve also written for various websites and also run two of my own; a music site called Love-It-Loud and a horror interview site called Dr. Gore’s Funhouse. Last year I was hired along with Gary Smart to write the Return of the Living Dead documentary and I’ve offered advice on a few screenplays over the last couple of years, although nothing substantial.” 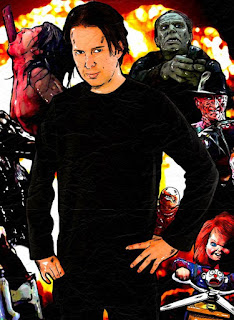 GH: You wrote the book “The Complete History of the Return of the living dead! Which is FUCKING AMAZING, tell us how long it took to complete a book of this size and scope.

CS: “Wow, thank you! After all the shit we went through with this book it’s so relieving to hear when fans say they enjoyed it. It’s funny, I wrote the book in three weeks but the entire process took well over a year. I had first discussed the idea with Gary around 2008, when he was designing a graphic novel based on an idea for a sequel that actor Don Calfa had. I wrote a treatment for a sixth Return of the Living Dead movie that we discussed adapting into a comic mini-series, but talk always eventually turned to a retrospective. We were both finally available around Halloween 2009 and so we sat down and discussed how we should approach the project. There were a couple of publishers who I really wanted to go with but they were scared off by the copyright issue surrounding the series. I was constantly told that this book would be impossible and that we should just give up, but that only made us more determined. The book was finally released around Christmas 2010, so I gues the entire process took around fifteen months.”GH: Are you currently working on another film book?

CS: “Yes, we have two projects that are in development. While Gary was working on the
design and artwork of the Return of the Living Dead book I contacted several directors for a book I wanted to write on underrated slasher movies. I wanted to select ten films, and each chapter would cover both the director’s career and the making of the slasher movie in detail, as well as featuring behind-the-scenes photographs. I managed to write five chapters before we were hired to work on the Return of the Living Dead documentary, but I intend to continue with it when schedules permit. We were recently approached about another book which has now taken priority and I’m really excited about. The contract has not been signed as yet so I can’t reveal what it is about but I think it will improve on what we did with our first book.”GH: If asked, would you write a screenplay for a ROLD remake?

CS: “It all depends, I guess. I’ve never been one to keep my feelings about remakes to myself, as with the exception of a handful they tend to be pointless and inferior. But if John Carpener or David Cronenberg had taken that attitude then we wouldn’t have The Thing or The Fly, so I’m conflicted. It depends on the producers or studio who were developing it; did they want to make a Return of the Living Dead movie that would appeal to fans of the earlier films, or would it just be another dumb, MTV-style action movie like a lot of modern zombie flicks? I wouldn’t rule out the idea but I wouldn’t hold my breath either.”GH: Do you own any props/costumes used in ROLD?

CS: “I’m not really one for props. I collect a lot of memorabilia like presskits, lobby cards, foreign posters and videos from around the world. I’ve never really been into getting props from movies, as then it kind of takes the magic out it. I have artwork and a few rarities, but nothing that was featured in the movie.”GH: Any advice for up and coming authors?

CS: “I guess the most important piece of advice I could offer is don’t allow yourself to be exploited. To get your first book published is such an amazing experience, but for this to happen you literally have to sell your soul. While the writer has passion for their work, those around you only see figures, as to them it’s just a business. So while you may have a clear idea in your mind of how the book should be printed, published and distributed, they may not share your vision. After a while it feels like it may not happen and you eventually become desperate and thus more vulnerable. It is then that a publisher or producer will exploit you, either by giving you a contract that backs you into a corner or one that screws you over financially. Never work for deferred payment, always make sure when you sign a contract that a specific amount and time frame is agreed upon. Usually this may come in several instalments, but as long as this is clearly stated in the contract then you are protected. And the other thing I discovered is people will walk all over you if you don’t act like a professional, so if you’re trying to write a book or a screenplay give the impression that you are a real writer and you may get treated like one. Just make sure you watch your back!”


Thanks Christian, It seems you`ve survived the zombies... Just watch the split dogs on your way out. 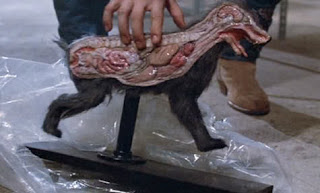 All interviews done on this blog is the sole property of Gorehound Mikes Blog and should not be used in any other blog, website magazine Copy write 4/25/2012 all rights reserved.
Posted by Gorehound Mike at 6:51 AM