In celebration of the 1 year Anniversary of Basket Case the Comic in Fangoria!!


In honor of this milestone were Celebrating with a EXCLUSIVE Interviews Joshua Emerick the talented artist behind the strip! 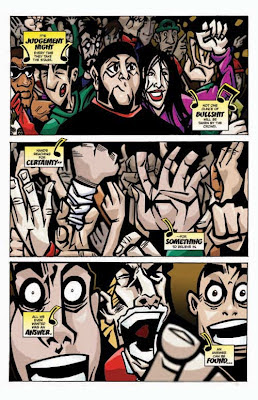 GH: Hello, so awesome to have you here with us. How long have you been sketching?

JE: I have been drawing for as long as I can remember. When I was a child I had a photographic memory with watching cartoons. So I would watch Tom and Jerry then when it was over I would draw them. As a early age I became aware of different styles I can spot a Chuck Jones cartoon compared to others. I would then base my styles on who I would like. I remember in preschool my teacher telling my mother that I was drawing on a sixth grade level. My art has been there as some of my earliest memories.

JE: BasketCase was a movie that I remember from a kid on USA up all night. My best friend and I would stay up all night creating comics. This film came on one night. We died laughing and drew Belial all night long. We woke up the next day to find out that BasketCase 2 was playing at our local theater. We went and we were the only two there. So to fast forward years later I am married and my daughter is around two. I got BasketCase on Netflix and she fell in love. Everynight she would have to go to bed watching it. I then became obsessed with doing a comic book.

GH: How did you approach Frank with the idea of a comic strip?

I started bugging Henenlotter for years and years to do the book. One day I see him on Facebook and I asked him if he would like to do a strip for his page. He finally said yes. BasketCase has hit my home to a point that my youngest boy Oscar calls actor Kevin VanHentenryck Uncle Duane. I have also appeared in Beverly Bonners Casey 30 years play.

GH: How did you get hooked up with Fangoria?

JE: When Frank said yes to the Facebook strip. I thought why just keep it there lets take it further. So I sent HorrorHound and Fangoria emails. Within the hour I heard back from Fango. Chris Alexander was really excited to do the strip. So that's how Fangoria got the strip and that's where it has been for a year. 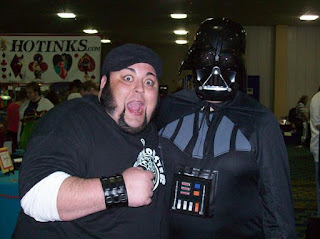 GH: Whats Frank Henenlotters involvement in the strip and does he ever give you notes?

JE: Frank started out in the beginning giving me free reign. I had to pass everything to him before it was published. Then as the strips came and came he began to collaborate with me ever since. Some ideas have been shot down. Recently I did a strip with Belial holding a knife and he didn't like that idea. He said Belial uses his claws and hands. Then he proceeded to say maybe he was drunk. Hahaha. We are now in the talks about doing a graphic novel.

GH: Besides BC what are some of your other favorite horror/cult films?

JE: Omg! Where do I start. I love old Universal ,Hitchcock, Ed Wood. My cousin and I used to play the face waxing scene in Tourist Trap. I remember Howling,Terror Train, American Werewolf in London as some of my earliest memories. The Excorcist always scared the hell outta me as a child. Then there was The Lost Boys, Monster Squad, Friday the 13th and Nightmare on Elm Street in my prepubescent days. I love horror. Always have. My Uncle was a minister and I would stay with him for a month during summer. I remember that was the first time I saw Friday the 13th. We would watch horror all the time. He was so cool with the world of film.

GH: I hear theres a animated series for Basket Case in the works? Anything you can tell us about it now?

JE: Well right now I am not allowed to comment on this. Things are still in the early stages. However when the time is right I will be the first one screaming about it.
GH: Your comic strip has a milestone correct?

JE: Yes it has. We are one strip away from our year anniversary with Fangoria.plus we are looking at action figures the graphic novel. Plus the long awaited toon. Cleve Hall from Monster Man from SyFy is doing a exclusive Belial for me based on the strips just for Cons.

GH: Are you currently doing any conventions or signings where your fans can meet you?

JE: Yeah this is year two for my big horror con tour. I'm doing Blood on the Beach in Virginia Beach in April. Doing HauntCon with Cleve in Monroeville Pa. The first weekend in May. SciFi in the Valley mid May in Ebensburg Pa. FrightNight Film Fest in June in Kentucky. Not to mention the regulars HorrorFind,HorrorRealm,EerieHorror FilmFest. Plus whatever else pops up.

GH: Finally any thing you`d like to say to your growing fan base and any advice to young artist out there.

JE: I would like to start by thanking everyone who has followed or viewed the strip. I also promise that there is so much more to come. BasketCase is on its 30 year anniversary and it is no where coming to an end. I have stuff lined up with MTV's revamp of Liquid Television, work with Cleve Hall and Fred Dekker. So my horror streak will branch out further than Basket Case. Stay tuned follow me and I will entertain.

As far as young artist. My daughter Ella is 6 and she already knows she wants to go to Tom Savini's school. There is so much talent out there. It always doesn't happen over night believe me. I'm an old decaying man. As long as you never give up and you always feel that burn and desire to keep going. The passion of the art and the payoff of seeing your work out there will always keep you going. Hell if I gave up years ago there wouldn't be a Belial and Duane in 2012. Just don't give up. 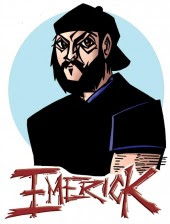 Thanks Joshua for stumbling into my lair, just

PLEASE NOTE THAT THIS INTERVIEW IS THE SOLE PROPETRY OF THE GOREHOUND MIKES BLOG AND SHOULD NOT BE USED ON ANY OTHER SITE OR MAGAZINE! Copyright 4/11/2012 All rights reserved.
Posted by Gorehound Mike at 6:19 AM