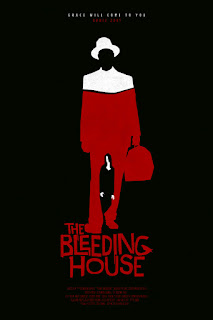 Christan southerners -there scary! Nothing captures that more then The Bleeding House

When I watched this I quickly went to imdb to see what else this seasoned pro had directed, well I was stunned to find that this is Philips first feature.This film is polished and seems like he got a decent budget. More importantly Gelatt pens a screenplay that is well thought out and gives the audience plenty of tension filled moments.

Right off the bat you get the sense that something awful has taken place and the film does a wonderful job at keeping us in the dark about details, every so slowly we get the full grim picture. Scenes are skillful crafted to hint at what dark secrets tore this family apart. It is very understated which these days is a breath of fresh air. It`s a film that really builds and builds to a nice climactic ending. Gelatt isn't shy about using symbolism which in the wrong hands might have come off as pretentious.  The dinner scene in the beginning is a perfect example, it`s delightfully bleak and perfectly illustrates the decay of this family that is happening in front of our very eyes. No doubt about it y`all this film is dark!


The actors do a fine job. Many of which are seasoned veterans. New comer Alexandra has a lot of growing as an actress but is good non the less.  It`s seasoned actor Patrick Breen that steals the show. His performance as the mysterious southern stranger is understated and wonderfully creepy. So many other actors would have went way over the top but as the old saying goes less is more. 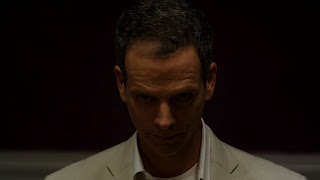 There is lot of blood draining going on in the bleeding house, and while its not overly gory it is disturbing to witness. The make up effects are nicely executed. Pun intended. I love a good gut spewing film like every other gore hound but sometimes its the unsettling violence that sticks with me more.

Bleeding House is a perfect example of a nice fusion of clever understated screenplay polished camera work and great actors and a director who clearly has his pulse on the horror genre. I think we can expect some great things from Philip Gelatt and a few more home runs and he could be the next Wes Craven or Dario Argento. And thats not a southern lie ya`ll