Demons 2: Its my party and i`ll die if i want too! 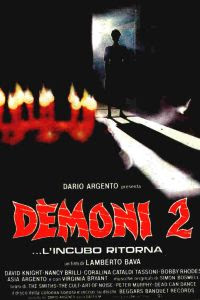 The Sequel to the Cult Classic- Does it stuck up?

The first Demons is a fun bloody romp but I think its safe to say it wasn't heavy on plot and Demons 2 doesn't amp up the plot but rather triesto take the basic outline and shift it to a different location. Why mess with um perfection?  The ominous theater in Demons one now takes place in a apt building, wow lack luster-you bet! And the creepy film that summons the demons, pretty similar to Demons 1 and even shows clips from it. Very clever (eye roll)  but I cant help but feel it was a lot cooler seeing the demons coming out of the giant cinema screen. The film within a film just isn't the same being on a small tv screen. Sorely missing is the really cool metal masks, it seems like all the things I liked about part one they dropped or changed. I respect the fact that the wanted to change it up, but why go low rent?
It really feels like this was rushed into production and its very evident by its release date of only a year after the first. Shame because this could have been so much better had they taken the time. Having said that Demons 2 does have some fun moments that make this worth your while. There is something really cool to me about a birthday party massacre, maybe because their to celebrate a persons birth, you expect people to be having a good time, not to be slaughtered. The concept of a demon coming out of the house hold pet is a really nice creepy scene. The action scenes are pretty good and Bobby Rhodes seems to not lost his demon killing edge. The ending is head scratchier, but at this point I think we`ve already thorn out things like logic. 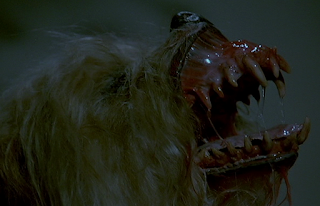 The demon make up effects are like the first one,very strong and effective. Guys like Bava,Argento and Luci do know how to hire some top notch effects people. At times some of the transformations and creatures look dated, but i`d prefer that over CGI any day. If you freeze frame it you can that some of the demons from neck down are human.  The little demon boy is rad too.

Demons actor Bobby Rhodes is brought back for the sequel to play a different character which is fine by me because he`s as always fun to watch on screen Asia Argento makes her feature debut, years before she`d acted horrible that is in her fathers suck fests. Shes pretty good in this.Angento mainstay Coralina Cataldi Tassoni is great as the birthday party diva and later demon spawn. 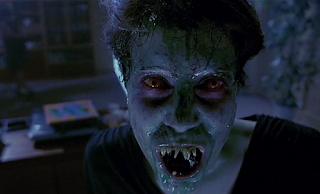 This follow up isn't all it could have been, yet with some above par demon effects and some gore Demons 2 is still decent and if you lower your exceptions you can enjoy this 80s gore fest. While it not be the most original sequel it still satisfies our love for Italian gore trash.