Hello Gore fans! Welcome to a new feature to this blog. Take a trip back to when horror films were both scary, fun and splat-tastic!

We look at some fan favorite films from the brave souls who actually survived them. Cast, crew and sometimes both share their memories Exclusively to Gorehound Mike`s Wild Cinema blog. We kick things off with a film that over time has become a cult classic. 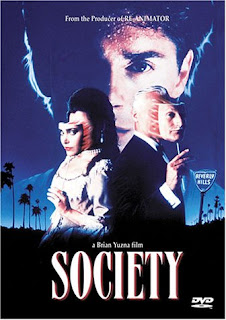 The war of the classes, it seems like every day the lower class rages a battle with the upper class. Rich, there also a whole other species. Well in the 1989 film Society that is exactly what is going on. This film was made by the legendary Brian Yunza (see my interview with him in earlier post) and has a smart biting satire along with a more then memorable finale that will leave your jaw dropped.


This is part 1 of a 2 part Society Retrospective 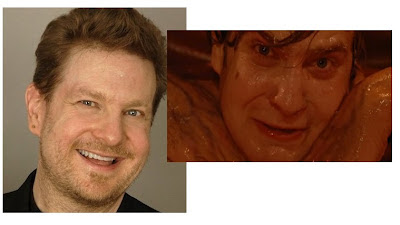 On getting the role:


After getting the part, I remember initially being a little freaked out reading the script. Especially my character going through the shunting. I drove to my agent's and said, "Um... there's people I don't even know licking my body in this." He talked me into going through with it. But I was still a little nervous. 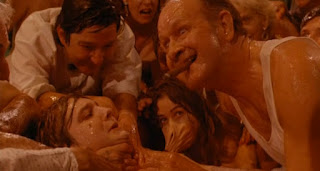 On the infamous shunting shoot:

And the shunting is of course what stands out for me about the shoot. I remember lying on that couch, screaming and crying as I was being sacrificed to Society... half naked, covered in slime with lots of people fondling and licking me. I had made the mistake of telling one of the crew I was a big fan of art house filmmaker Ingmar Bergman. Between takes he would lean in and say, "Tim, Bergman just called! He's very proud of you."


But I really went for it as an actor. I wanted to make my death uber-painful to watch. And I succeeded. Director Brian Yuzna later told me while he was editing my death, he had a visit from one of the actors from Night of the Living Dead. The actor was so disturbed by my performance, he left the editing bay. I was really proud of that. Brian decided my death had to be lightened a little. He cut and trimmed, brought down my screaming and added in some waltz type music under the scene, so it wouldn't play too heavy. Which was probably a wise directorial decision. I screamed so much over the course of the day we shot most the shunting, I lost my voice. We shot a little more the next day, but I had to do that part sans my voice.


The whole thing was frankly a little creepy to play at times. You know you're in a film, it's just a part. But I'm crying, screaming, begging for my life. Everyone is laughing and growling at me like animals. I got a little overwhelmed at one point. I thought it was just pain in my legs, because I was crouching then inside the couch, with the prosthetic version of my body attached at my neck. My legs were really sore. I got a break and an extra came over to me and said "It's hard, isn't it?" He didn't mean my legs. He meant just playing this whole weird scene. His acknowledging that really made me feel a lot better.But I don't regret the experience at all. It's been nearly 24 years since we shot Society and I have nothing but really the fondest memories of it. Yes, even the shunting.

Big thanks to Tim for taking them time to share his memories on this unique film.


Coming Soon Part 2 of the Society Retrospective this time with the FX People!


please note that the content on this blog is not intended for any other blog,website or magazine. Copywrite 2012 Michael Vaughn
Posted by Gorehound Mike at 8:05 AM