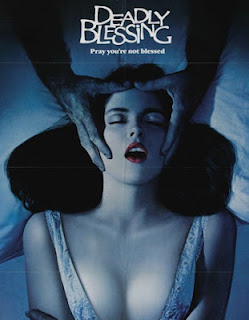 Three years before Wes Craven made his ground breaking horror film A Nightmare On Elm Street he made Deadly Blessings. Deadly Blessings is about the mythical dream demon- no not Freddy, an Incubus a demon that sucks your life force while you sleep. Sounds like a prototype for another certain demon that comes in your dreams. Also its interesting to note that he actually used the famous blades between the legs in the bathtub only in this its a snake. Their is a very similar shot used that is reused in NOES. And while this film very gained the same status Nightmare did it is however entertaining and has a cult following of its own.


First off let me start by saying that Ernest Borgnine has the best crazy evil eyes in all of film history, truly epic. This slick little chiller by famed horror director showcases his early chops in creating tense scenes. It`s clear that Wes didn't have a very big budget to work with, but he seems to make it work as the film has style and so very creepy moments. While everyone in the eighties were making masked slasher films Craven was always one to think outside the box (at least back in the day) I loved the unique idea behind this film, I mean Amish-like sect that may be involved in a series of mysterious murders-very cool. It really reminds us why back in the seventies and eighties Craven was the king of nightmares! Craven uses the country side and shows us both the beautiful side and the deep dark sinister side that city folks dont see. The recurring theme of the spiders is very effective and unsettling. DB starts out kind of slow but it builds to an amazing ending that will make your jaw drop.

This is pretty tame as blood and gore goes and if your expecting a blood bath like Elm Street think again. You`re likely to see more of the red stuff in an episode of C.S.I. Its by no means a mayor complaint as its interesting enough story to transcend any lack of kroovy.

The cast is very interesting with many veteran character actors including Jeff East Sharon Stone Ernest Borgnine and cult horror star Michael Berryman. Berryman is wonderful as always.Its a shame that hes not in it more but alittle bit of Berryman can go a long way. Everyone is pretty good Borgnine of course steals the show as the super creeptastic Isaiah. Over the top? You bet your crazy beard he is, but its fun none the less. Sharon is of course stunning but shes not really that great in this one, she goes from being decent to giving a sluggish performance. But come on its Sharon Stone so of course its always entertaining to watch her, to bad theirs not a ice pick in sight.

While this never gained the kind of status that Nightmare did it is none the less a nice chiller. Wes Craven spins a web of tension and fear in the Amish country and fills the screen with stellar actors. Its down right criminal this isn't more widely heard of.  The biggest crime here is that this has yet to make it an official American DVD/Blu Ray release. Good news however for those of you who have Netflicks its available to watch instantly, the quality is fair at best but its still out there to see.  Maybe with a nice DVD/Blu-Ray release it will gain a whole new following that is deserves. Just watch out for Borgnines crazy evil eyes!

Posted by Gorehound Mike at 7:33 AM