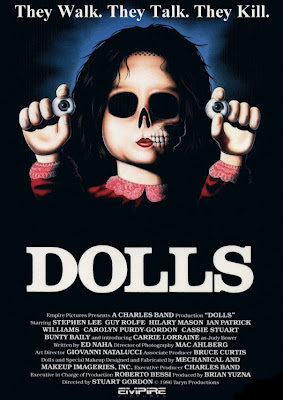 The Plot: A terrible storm brings five strangers to an old house that are owned by a toy maker and his wife.
The guests soon discover that the elderly couple have a dark secret and that the dolls are more then just mere porcelain and glass. Will they survive the the longest night in history or will they become just soulless plaything. 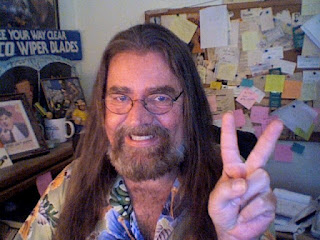 Ed Naha Bio:
Born in June 1950 in a small town in NJ. He attended Kean college and went on to begin his writing career as a rock journalistic. He has written for such power houses as New York Post, Rolling Stone,Playboy and edited the very first issue of Fangoria. Ed has also written the novelization of Ghostbusters 2 and the first two Robocop movies as well as non fiction work like "Roger Corman Brilliance on a Budget" which is brilliant! His mystery novel "Cracking Up" was nominated for a Edgar Award. All together he has written 20 plus novels. In the eighty's he wrote the cult classic Dolls and Troll. His major success came when he co wrote the block buster "Honey I Shrunk the Kids" as well as the follow up "Honey I Blew up the Kids"

Gorehound Mike is very proud to have an exclusive one on one with the very talented Ed Naha!

GM: Were you on set often during the filming?


EN: No. Back then, Charlie Band had a studio set up in Italy, which pretty much
precluded sending a writer over. Too expensive. Over the years, though, I’ve found that
writers are mostly excluded from the actual filming process unless you have some sort of
producing credit. A lot of writers get very pushed out of shape over this but, I suppose,
I’m sort of an odd duck. I prefer not to be on the set. Once I’m done writing, I’m done.
I never set out to be a producer (although I have wound up exec producing almost 90
hours of TV) or a director. I usually don’t see a film until the final cut. So, I can either be
delighted or discouraged. Fortunately, with “Dolls,” I was delighted. Plus, I got a lifetime
friend out of the deal, Stuart Gordon.


GM: Any fond memories of this film? Any practical jokes on set?


EN: Well, everyone had whoopee cushions and….nahhh, I’m just making that up. I
wasn’t there. I DO know that it was a bear of a film to coordinate. Stuart and the actors
just clicked. So, all the characters were just dead on and then some. It’s a weird deal to
laugh out loud at things you’ve written but, in all honesty, by the time I see the finished
film, it’s as if I didn’t write it. I have this ability to just be part of the audience. I chalk it
up to blunt blow trauma and/or short-term memory loss.


Where things got a tad hinky with “Dolls” is that the actual dolls, initially, were
marionettes. They were beautiful…but they had strings. And, no matter how some scenes
were lit, you could see the strings. So, a lot of scenes involving the toys had to be re-shot
in post-production. David Allen, who was a master of stop-motion animation, brought
the toys to “life.” He was the resident magician at the studio and worked on practically
everything.


Because he worked on nearly every release, though, the post-production work on “Dolls”
took a heck of a long time. Stuart actually filmed “From Beyond” after “Dolls.” It was
released first because the stop-motion work on “Dolls” was so time-consuming.


GM: Were their any scenes you wrote that got cut out?


EN: I’m not sure. I know there was one scene that was changed a bit. In the beginning
of the film, when Judy’s teddy bear is tossed out the car window during the storm, in the
script a titanic “Teddy” comes roaring up to the car and tears the crap out of the nasty
parents. In the script, Teddy is just a big teddy bear. In the movie, however, a monstrous
bear creature rips its way out of the gigantic cuddly toy and does the job. I thought the
concept of a kid imagining her plush toy as a gargantuan killer was funny as Hell. But,
again, I’m pretty odd.


GM: Were any of the actors allowed to improv or were they told to stick to your script as
written?


EN: I’m sure Stuart and the actors riffed about lines but I couldn’t point to an example.
Hey, that’s what happens when you get to be a Geezer.
One interesting bit about “Dolls’” origin. Stuart and I were around before there was a
script. Charlie Band brought out this poster, the one with the female doll holding her
eyeball in front of her, with the title “The Doll.” They wanted me to write it.


Of course, since I’m such a creative tyro, I went for broke and had a household full
of ‘em. Now, after I handed in the script and “Dolls” made it to the trade papers, I got a
phone call from Tom Holland, who was doing the first Chucky film. He was worried that
there’d be overlap between the two films. We had a nice chat and came to the conclusion
that we were both safe.


GM: Was their ever serious talks of a Dolls sequel and If approached would you write a
remake?


EN: Stuart and I talked about a sequel wherein the dollmaker and his wife turn
themselves into dolls and have themselves shipped stateside to Ralph and Judy but
we didn’t get very far. Charlie’s studio began to change a bit and he got into the
whole “PuppetMaster” series. Stuart, producer Brian Yuzna and I turned our attention to
getting “Honey, I Shrunk the Kids” off the ground at Disney.


I don’t think I’d get involved in a remake unless Stuart was onboard. For some twisted
reason, we managed to pull off a gory film that had both a sense of innocence and a lot of
heart. We’re both a couple of big kids (although, technically, I’m short). If Stuart signed
on to film the phonebook, I’d be there.


GM: Does it surprise you that to this day Dolls is still talked about and written about?


EN: I’m delighted about that. Thanks to the toobz of the Internetz, I’ve become aware of
how many people “get” the film. I joined Stuart for the commentary on the DVD release
a couple of years ago. It was only the third time I’d seen the film. (See: “odd duck”
references.) The two of us had a good ol’ time.


GM: What are you currently working on?


EN: Not being dead. I almost croaked earlier this year. Imagine my chagrin. It was
a reaction to prescription meds. It was actually kind of funny, in an absurd Monty
Pythonesque kind of way. Sort of like the Black Knight scene in “Holy Grail.”


I have an animated film “Noah’s Ark: The New Beginning” that’s in post-production
somewhere. Now, that I’m recuperating and have the use of my hands back - allowing me
to type - I’m hoping to get back to work, again. It’s a bitch trying to type with your nose.
You wind up looking like a pug and the space bar ruins your mustache.


GM: What advice do you have for other up and coming screenwriters?


EN: Learn every synonym for the words “explosion” and “explodes” and keep your day
job for as long as possible.


All interviews are not to be used in any other blog,website or magazine. Copywrite 2012 All rights reserved
Posted by Gorehound Mike at 4:06 PM