Society
Released By: Arrow US

For years Arrow has blazed a trail for blu ray's in the UK. Luckily for collectors in America a US branch was started. Right out of the gate they prove they can play with the big boys (Scream Factory,Synapse etc) and "Society" proves that this company can deliver the gooey goods.

I`ve been a huge fan of "Society" since Anchor Bay released it on DVD. I even had a chance to interview both Brian Yuzna and Tim Bartell for this blog. So when I heard a nice blu edition was coming out I was beyond excited, however my high expectations were met and more.

Packaging: I rarely comment on this aspect but with a stunning package like this I feel like not mentioning it would be a huge disservice. Instead of just being lazy and using stock photos I took some of my own copy. 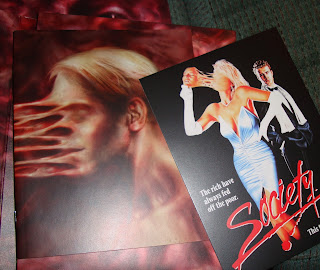 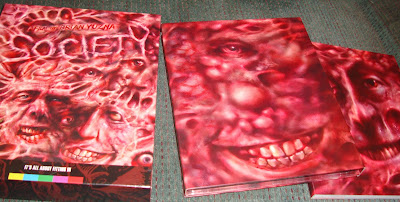 First off the original artwork by Nick Percival is simply amazing, I really hope he does more art for Arrow in the future. A limited edition comic book is included entitled: Society: Party Animal. Fans of a possible sequel can be at least somewhat slated by this. A booklet with more original artwork and a great article by blank and a clever little invitation tops everything off. All together a lesson in repackaging a film the right way for die hard fans and also to gain new ones.

Picture: Upgraded from the previous Anchor Bay DVD. As per the booklet "the transfer was restored in 2013 using the best film and audio elements avaible. The 35mm intermediate positive was scanned with a 2k resolution.." You can clearly see the difference between this and the previous editions. Image stability is great and colors are rich and blacks deep. Little grain here as well.

Sound: Society sports a 2.0 audio uncompressed. Sound of depth is great and it really showcases the amazing score. No background noise and sounds are stable. Best this has ever sounded.

Special Features: Society features a brand new commentary by Brian Yuzna . A refreshingly candid interview with Yuzna, its short yet very interesting and to the point. A series of well made featurette's gives fans a more in depth look at the process of bringing this cult classic to life. A conversation backstage at the Society world premiere as well as a Q&A round out the features. A "Screaming Mag George" music video is also a nice little feature. Just amazing features, its nice to see a new commentary rather than reusing the old one on the Anchor Bay disc.

Overall: Arrow really out did themselves and really hits the mark in every department. I can see this being nominated for a RONDO award for best release of the year and it makes my short list for best blu of 2015.

Posted by Gorehound Mike at 4:12 PM