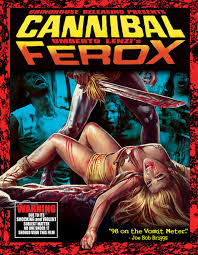 Here is is, a classic of grindhouse sleaze, and who better but Grindhouse Releasing to lovingly bring it to the horror collector. A classic of the Italian horror subgenre of cannibal films, this movie works that template for all its worth, after a New York City-set beginning in which we see mobsters looking for Mike (Radice) and his friend Joe (Lucchini), who stiffed the mobsters and headed for the Amazon River. The police (led by Robert Kerman) begin tracking down the missing dealers. Intercut with the NYC scenes is the *ahem* meat of the story, in which anthropology students, Gloria (De Selle), Rudy (Mattei), and Pat (Kerova) have made a trip to the Amazon to prove Gloria's thesis that cannibalism doesn't exist. From the moment in which a native eats grubs, it's clear that the audience's sensibilities aren't safe by any means. Once the anthropologists and the drug dealers meet, it doesn't take much time for the gut-munching to begin, ratcheting up full-bore after Mike and Pat have sex, do cocaine, and mess with the natives. Some excellent practical special makeup effects displayed here thanks to Gino De Rossi, including a castration (yikes!) and a woman's being hung by her breasts from hooks (well, at least the sexual violence is equal opportunity!). Like its spiritual "cousin" Cannibal Holocaust, this film features real-life animal cruelty, which is indefensible, but blends almost seamlessly into the simulated carnage for a most disturbing experience.

The film itself benefits from an absolutely eye-catching 2K transfer scanned from the original film negative's aspect ratio of 1.85.1 at 1080 resolution to an aspect ratio of 1.78.1. The 2.0 DTS-HD master audio mix will pop your ears with its clarity.

Extras aplenty include interviews with principal cast and crew, as well as a highly informative documentary Eaten Alive: The Rise and Fall of the Italian Cannibal Film. A commentary track featuring Lenzi and Radice, a stills gallery, trailers for current and upcoming Grindhouse Releases, a glossy 12-page booklet of liner notes by Times Square grindhouse historian Bill Landis and horror filmmaker Eli Roth. Included with the two Blu-Ray discs is a CD containing the full soundtrack by Roberto Donati (Budy) and Fiamma Maglione, remastered in 24 bit/96 kHz sound from the original master tapes, which is still creepy and atmospheric when listened to on its own.

This release is a more-than-worthwhile addition to any horror/grindhouse connoisseur's Blu-Ray collection.

--William O'Donnell is an aging goth and horror enthusiast whose short fiction has been published in the anthologies Bell, Book, and Beyond and Travel Guide to the Haunted Mid-Atlantic Region, and whose music reviews appeared approximately bzillion years ago on Gothic.net.  He's also a vegetarian.
Posted by Gorehound Mike at 11:29 AM