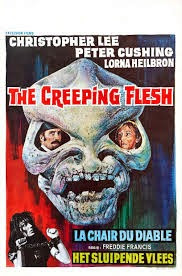 Amicus produced a lot of gems, a lot of which were over shadowed by more popular films like "Tales From The Crypt" Vault of Terror etc. In recent years however it has found an audience and gained a cult following.

In our third part series on Amicus "The Creeping Flesh"

Emmanual Hildern (Peter Cushing) is a Victorian age scientist who returns to London with what he believes is the find of the century. While in Papa New Guinea he found a very strange set of bones that pre date the oldest fossils found. He along with his assistant discover that when wet these bones grow muscle and flesh and produce very strange blood cells when reviewed under a microscope. He believes he has discovered true evil embodied and therefore it can be cured. He aims to win the blank prize with his findings, but it seems his brother James Hildern (Christopher Lee) who owns and runs a Mental Institute is also in the running as well. It seems that blood isn't always thicker than water and James will stop at nothing to beat him with his "groundbreaking" book on mental disease.

Meanwhile Hildern's mousy daughter Penelope lives an extremely sheltered life, never leaving the house and taking care of things while her father is away. She believes her mother died a long time ago, yet in reality we learn that she recently died at James Hildern Institute. Penelope is desperate to know more about her mother but is kept in the dark for fear she will be upset by what she learns. Using his daughter as a human genie pig he secretly injects her with an experimental "evil antidote" But of course things back fire horribly. 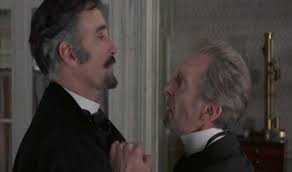 You cant help but be in awe when you see the two titans of horror Christopher Lee and Peter Cushing on the screen. Its a lot of fun watching the two both try to out do the other. The result is as always pure entertainment.Alas that is the only thing that makes this movie worth watching. Someone should have reminded the film makers that this was a "horror" film. Creeping Flesh plays more like a melodrama than horror, with only splices of fright mixed in. I really dug the beginning of the film and how Lee was playing a Dr Frankenstein like character i.e tinkering with dead limbs etc. But what followed was very a very flat family drama. Its heavy handed without any sense of irony or black humor to balance it out. I`m all for developing characters but its just boring and lacks any fun. Films like this can benefit from a dose of the serious but this is way over kill or in this case under kill.

What makes me most troubled about this is they take a brilliant concept and do nothing with it. You see the skeleton which is very bad ass looking and like me your excited for the pay off which when it comes is very disappointing. As I said this film has gained a small cult following and I really don't understand why. Its like a movie that fails on so many basic levels.

Lets talk effects. They are BAD! When the finger of the skeleton grows muscle and flesh it looks laughable. Its fat and veiny and when put in the jag it looks like a penis. I`m sure they were working on a low budget but even a 1st year effects major could have done a better job.

"The Creeping Flesh" would have worked much better as a segment in an anthology rather than a padded out full feature film. Even Chris Lee and Peter Cushing as good as they are cannot fix this very limp melodrama. While I never spoil an ending, its very predictable which I figured out in the first 5 minutes.