The Tingler: LSD and Vincent Price 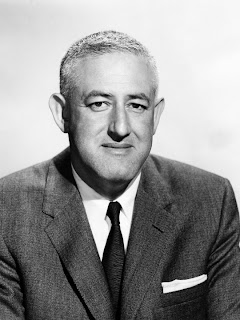 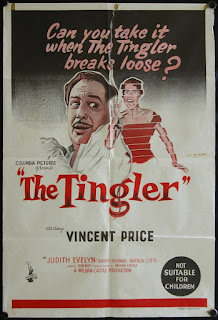 The Gimmick: Probably the most well known of them all. Certain seats were rigged to buzz during selected scenes and the audience members were told to let out a SCREAM to re leave the "tingle" sensation.


Long over are the days of showmens like Castle and grand theares that housed there low rent but enoyable films. Not that I dont love morden cinema I cant help but feel like my generation really missed out on getting the full fun of seeing this film as it was meant too, buzzing seats and screaming movie patrons. Even without the rigged seats, I found this film to be very enjoyable. 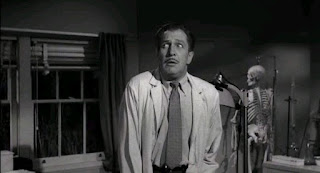 The story itself is so far fetched but you just cant help but love it anyways. The concept is actually pretty unique and has some nice twists you might not see coming. The actors do a great job at really making you believe it. What sells this film even more then the gimmick is the king of horror himself Vincent Price who as always gives a 110% and sells this ludicrous plot.Playing the sleazy wife of Price is Patrica Cutts who is great her male lead and holds her own. She is a great bitchy wife that is sexy and just down right wicked They play off each other so well, and you can tell they had fun battling each other.  Even without the experience of the Castle gimmick this still offers an fun ride. The scares are bargin basement but you also have to remember that back in the 50s this was cutting edge.
The Tingler is also part of cinema history? How you might ask? This is the first film to show an LSD trip with none other then Vincent Price. I mean how cool is that? Sadly it doesn't last as long as you`d like,but the very fact its in there is awesome. There is some very trippy color sequences towards the end of the film. It lends a creepy drug/dreamlike feel throughout. 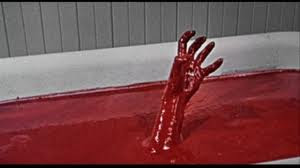 Unlike most of the monsters of the 1940s and 50s the horrific "Tingler" in the film is actually a well designed creature. Its like a creepy bug thing. And It may not be able to hold up with the CG I monsters of now, it is a creepy crawler that I wouldn't want to tangle with. This was even cool enough that a toy company made a scale model/toy of the Tingler. Alas I don't own him myself-someday! Castle teases us with the monster only showing glimses until the infamous scene in which the Tingler is loose among film patrons. This is the scene that tied in the buzzing of the seats. You must scream to stop the tingle you feel. 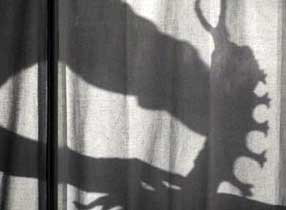 This comes down to people who love older films and those who don't. I find a lot of charm in even the flaws because the film is just so unique and even with its low grade chills I find it entertaining. If you're not expecting any high art (pun intended) and just a roller coaster ride filled with monsters drugs and Vincent Price then there is a lot to enjoy with this film. Just remember to save yourself from the Tingler just let out a SCRREAMMM!!


Film Triva : Uber Castle fan John Waters searched for years to find a manual for the rigged seats and even asked Castles relatives if they had one. But to no eval. Finally someone found the manual and gave it to Waters. Waters used a Castle type gimmick in his film Polyster with Smell O Vision in with patrons were given scratch and sniff cards.

Posted by Gorehound Mike at 7:28 AM