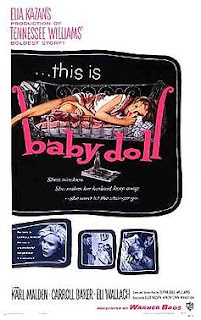 Not all films on this blog are horror films, its why I choose to call it Weird and wild cinema. I thought i`d mix it up a bit and give us some weird and wild with this classic racy strange film that has a wonderful all star cast.

The Plot: Cotton gin owner Archie Lee has been married for two years to a young pretty girl, sounds perfect right? Wrong- As an agreement with Baby Doll`s father remain a virgin til her 20th birthday. Baby Doll is almost stuck in child hood as she sleeps in a crib and sucks her thumb. With her birthday rapityly approaching tensions mount between her and Archie. To make matters worse competition blows in to town in the form of Silva Vacarro who owns a better more modern gin and threatens to take business away. When a massive fire burns down Vacarro`s gin, fingers quickly point to Archie who was witnessed at the scene.Dealing out his own Italian justice Silva uses Baby Doll as his pawn in getting revenge towards Archie.

This 1956 film adapted from a Tennessee Williams it was as controversial for its racy subject matter. It has since become a cult classic that should be essential viewing for any film buff.

Like any good Williams play this film is teeming with hot southern heat and steamy sexuality. By today's standards the sex is mild but viewers should keep in mind at the time women were still not thought of as being sexual creatures with desires but rather traditional housewives. A healthy dose of sexual perversion is injected to make this a film that broke taboos of budding sexuality that just wasn't talked about. There is a wonderful scene in the beginning of the film that shows Archie peeping in at the beautiful Carroll Baker in the infamous crib sucking her thumb. It sets up the tone and her character perfectly in such a short amount of time. Deliciously racy for the time there are some not so subtle sexual in do endows such as when Baby Doll licks an ice cream cone while some asian Americans laugh as they obviously see the underling message. It also highlights the creepiness of her being child like, yet sexually charged. Just another wonderful touch.

The scene that was most infamous is when Eli Wallach pays Baker a vist while Archie is away, the sexual tension is as thick as the southern heat and twice as hot. There chemistry sales this moment and leaves a lasting impression on the audience. Its very smart how Kazans starts the scene very innocent and ever playful sexually and then it takes a turn to the sinister side and reveals the turn nature for the Silva`s visit.


The cast is full of film legends.  Hollywood legend Karl Malden is electric as Archie Lee. His range is perfect as the tortured husband of Baby Doll. He like Carroll walks a razor edge of being both a villain who is powered by greed to a beaten down verbally abused and sexually frustrated husband. Its gut wrenching to see him pushed to his breaking point towards the end of the film. Even though Archie clearly is a shady character I still cant help but feel sorry for him. Mr. Malden really brings different layers to his performance. Karl film resume reads like royalty being in such films like Streetcar Named Desire,Patton on the Waterfront and Hitchcocks I,Confess just to name a few. Eli Wallach who plays the villainous Silva Vacarro.Wallach has been in such films as "The Good the bad and the Ugly" The Misfits with Marilyn Monroe and Godfather III, his resume also is quiet prolific.   Not to be out down by her power house co stars is Carroll Baker. She is amazing in this film and for being a fresh young face, really commands her own with on the screen. She has a innocent quality to her yet she is over flowing with sexuality and even though she is nasty to her poor husband Archie, she still comes off as sympathetic by the end of the film. Her and Karl play off each other perfectly which makes this film endlessly watchable.

The beautiful yet broken down mansion Tiger Tail is like a character in of itself. Its disrepair is symbolic of the disrepair that has taken place in there marriage, which like the house over time has crumbled. Kazans certainly has a keen eye for southern life and captures it in all its glory.


Race plays a central theme in this film. The people in the town doesn't trust Silva because of his Italian heritage and the African American actors are relegated to small roles. More importantly though Baby Doll also services as a harsh reminder of the Jim Crow laws that were still in effect (til 1965) You will see whites only signs, but as they say when we ignore the past we are doomed to repeat it. Lets face it the South was not a great place for racial interrogation.  The humor is pitch black and might not be for everyone. If you like films/plays like Streetcar or Sunset Blvd. your most likely to get the dark comedy, though if you like the films of Eddie Murphy you might not... Just saying.

Baby Doll was nominated for numerous Academy Awards and has a brilliant cast in these oddly comedic and perverse flick. And while it may remind us of the bigotry of the South its a steamy hot slice of Americana.Unlike most of the films on this blog there is no tits or gore, having said that it still sure to entertain fans of the weird and wild and come on who doesn't love seeing the sexy young Baker nestled in her crib with thumb in her mouth.


Film Trivia:  In John Waters opus "Pink Flamingos" a poster of "Baby Doll" can be seen in Connie Marbles house. Men In Black star Rip Torn made his feature film debut in an unaccredited role as a Dentist.
Posted by Gorehound Mike at 7:14 PM