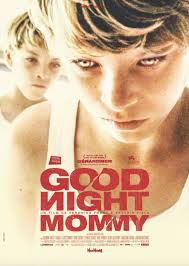 **As always this review is Spoiler Free***

Creepy children in horror is a long standing tradition not only in America but all over the world. There is something in those angelic faces that can often be misleading. I put hype aside and went into this film knowing virtually nothing about it.

After a horrible accident a mother undergoes cosmetic surgery and must take care of her identical twins Lukas and Elisa while recovering from the psychical and mental strain. She is also going through a separation from her husband. To make matters worse her appearance is rather shocking as her face is wrapped in bandages. As the children try and coup their behavior becomes increasingly more strange.

Getting tired of horror movies about bratty annoying teenagers in painfully predictable situations, only to die but who cares because they are terrible anyways? Well your in luck because "Goodnight Mommy" is a refreshingly new take on the old "creepy kid" troupes. Like Takashi Miike brilliant 1999 film "Audition"it is a film that slowly builds during which time it explores real characters and character development all the while ratcheting up the tension until its almost unbearable.I was impressed by the writing and how only little by little do you find out whats going on, even throwing a Hitchcockian Macguffin in for good measure. This is a nice change of pace from the typical smash you over the head with exposition and serves to keep the audience both guessing and in suspense. It also has some interesting symbolism and subtext that makes the film a must in repeat viewings. One theme the film explores is the idea of doubles. Besides the obvious one of the twin boys there are numerous times when pairs of things come into play and use of reflection shots. 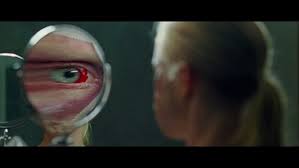 Another things that serves this film well is the inventive camera work and wonderfully moody cinematography which at times is beautiful and other times dark and foreboding. A lack of a soundtrack gives the film a more stark reality and its a bold choice. Speaking of reality the film is grounded in it but also playfully sways into the realm of the surreal without going to over the board.  But you might be asking yourself, is it gory?  After a nice slow tension filled build up fans of gritty violence do get what they`ve come for, sort of. Its not ultra gory however I feel it works in the films favor. What is so effective about the gore is its not done in a cartoonish way but is kept unflinchingly real, to the point of being hard to watch. 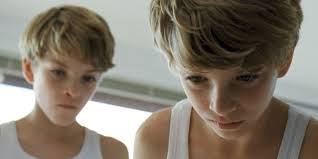 Unlike other movies the splatter isn't used to justify the movie and that may disappoint "gore fans" And dont get me wrong i love a good mindless gut fest but the movies that actually get under my skin are the more psychologically driven.  Seriously why is this film hated by some? Not only is it ballsy with its pacing and harrowing subject matter, its also fresh, original and creepy as hell. I kept the plot short for a reason, its good to go into this movie totally blank and avoid the jaded "horror buffs". Easily in my best top films of 2015.

Posted by Gorehound Mike at 1:29 PM