It Follows - Just add an SH at the beginning! 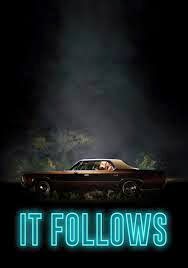 I`ve had one of those weeks where my whole world had been totally turned upside down and inside out. A beloved furry friend had departed quiet suddenly and of course emotions ran high, tears were shed and trying to face life without my special little girl. My friend and fellow writer for the blog William invited myself and my partner out to see a movie at a little independent cinema. It had been ages since I had been there and I really needed to get my mind off things.

He suggested we see "It Follows" from the trailerI had some reservations but I went into the cinema open and wanting to experience something new smart and entertaining.

Before the review let me just say this: I`m not one of these critics that enjoy picking films apart- I went in this not reading a single review and going in fresh with an open mind.

The opening scene pretty much sets the tone for the film, a pretty girl runs out of her house wearing barely nothing screaming and passers by mildly fain interest... Even her Father only mildly asked her if shes Ok. The tone made him seem as concerned as if he left the iron on. She gets in her car and peels out, does her parents follow her or um call the police. Nah!! By the way if your looking for any logic in this film don't, you`ll burn yourself out trying to make sense. No spoilers but things don't work out great for her.

So the plot if one can call this mess one is this. A mysterious force chases a chosen person and will end up killing them unless said person passes it on via sex. Jay our heroin of the film is going out with a guy named Hugh aka Jeff who after a bizarre freak out at the movies takes her to a deserted area to have fun (because after all why wouldn't you take a unstable guy in the middle of nowhere) after sex Jay starts spotting off flowery pros and Hugh/Jeff knocks her out and ties her up just to tell her that this thing will follow her instead of him because he passed it on to her sexually. After he unties her he drops her off at her house half naked crying and crawling on all fours. Jay along with her gang of friends try and help her figure out this messy confusing plot.


David Robert Mitchell tries hard to make this an "art" horror film but in reality its nothing more than the same empty headed hipster kids we`ve seen in a hundred other horror films in a ever confusing plot (which is meant to be cool and trendy) and add some lines that made you rather cringe or laugh or a bit of both. He comes up with a mythos but doesn't even stick to his own rules making the audience both confused and annoyed. In the beginning Jay is told that this mysterious force can be escaped if you pass it along sexually (and crudely is told it should be easy for her being a woman-sexist much?) yet even after she has sex with her friend the thing still comes after her? Its pretty bad when you cant stick with your own rules. At first I thought given the sexually transmitted theme it would be sort of like a updated Shivers" but to my dismay it was nowhere near the brilliance of the 1975 David Cronenberg classic. Many of the characters make really poor choices and it borders on horror parody. For example if you`re being chased by a evil force its not a great idea to go out to a creepy isolated park beside the woods in barely anything and decide to take a swing on the creepy looking swing set. Also Its not taught in sex ed but if your friend has a demon that gets spread via sexual transmission its not a good idea to have sex with her...Just sayin.

This also breaks a mortal cinema sin- being boring. Many scenes are just the gang hanging out, trying to be witty but coming off as empty soulless products of the Hipster generation. It seems the film is padded with many either dull scenes or confusing ones that only add to the viewers frustration. I dont mind a slow build to an awesome finish but this

Which brings me to my next point- its how the majority of the women in the film are treated as mindless sex objects to pass along deadly virus.  As stated above in a very cringe worthy scene Jay is told that her being a female should make it easy for her to get laid and pass the evil on. Wow... Its also interesting that several working women are also featured, I think David has some issues with the opposite sex. The men don't fair any better- You have Hugh/Jeff the bone head that uses then assaults and ties up Jay (just to tell her what she`s in store for) Or you have the other extreme Paul the wimpy whiny guy that wants nothing more to bed his best friend. In the world of this movie either your a dumb female (or a "smart" one in hip nerd glasses reading on her E-reader -cause its cool!) or a bone head walking hard on that will sleep with anything that says yes and treats women poorly.

The lead actress Maika Monore must have went to the Kristen Steward school of acting because she comes off wooden and as appealing as a forest fire. Honestly shes attractive but its like she downed a gallon of NyQuil before each take. Even her "love making" scenes are boring and not sexy in the least. I`m not saying she is a bad actress but not given anything good to do. I did enjoy her in "The Guest"


I will give the film props for not relying heavily on gore to substitute for scares but anything would have been better than the predictable make up job on the ghoul/ghost/evil force things.


Even the score which started out great (an obviously nod to John Carpenter`s early scores) gets annoying and at one point starts to sound like the theme from Super Mario.

Instead of the theater being filled with the sounds of screams we heard a very different sound, mainly laughter. Like the "Wicker Man" remake this film is filled with "screamingly" funny lines that was a source of great fun after the movie while at dinner. One character points to get a man and says "Its a person" Um duh!!  This would make a great RIFF TRAX which I hope happens.

It seems that this film splits the horror community and some see this as a brilliant film while others like myself see this for what it is a below standard horror outing wrapped in a veil of pretension pandering to the trendy set. Don`t get me wrong, i`m all for a slow paced creepy arty horror film but this was sloppy, boring and funny rather than scary.


With "It Follows" David Robert M has found a way to take something almost clever and fill it with a needlessly confusing plot, terribly unlikable flat characters with an ending that will piss you off. Follow the masses? No Thanks...

Posted by Gorehound Mike at 4:01 PM