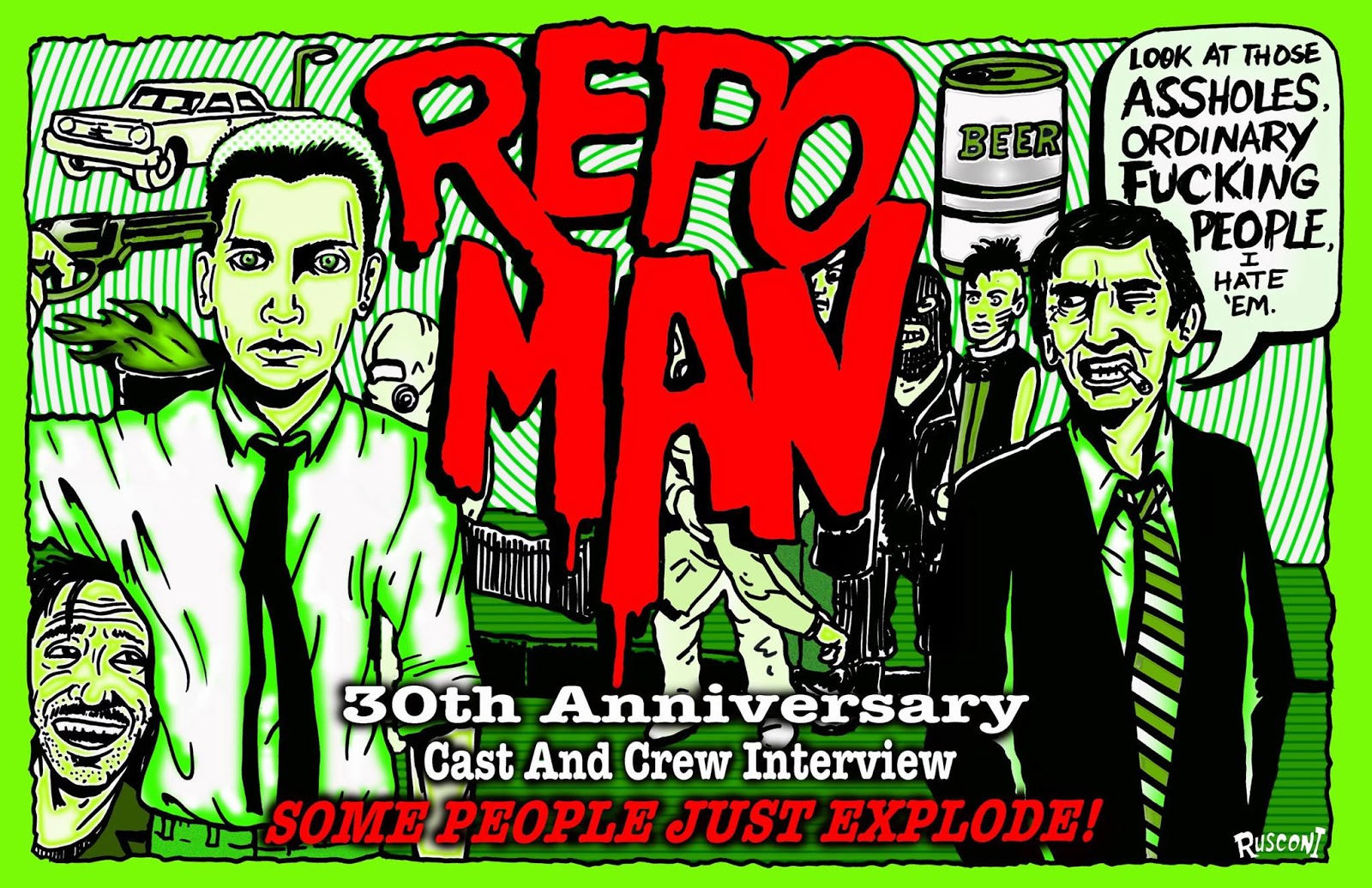 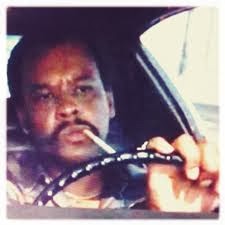 In honor of the 30th Anniversary of the cult sci-fi punk epic REPO MAN directed by Alex Cox
Gorehound Mike is proud to present Some People Just Explode: Cast and Crew Interviewed!
ALSO Huge Thank you to Lou Rusconi for the mega awesome banner he did! visit his site

INTERVIEW WITH SY RICHARDSON Aka Lite.


GM: How did you meet Alex Cox?

]SR: I did a student film at UCLA  for a friend of his. Mona Wali called Grey Area. He watched the shoot and after it was over he took my picture and resume and called me in to read of his student film Repoman. Funny thing about that is I came in to be an extra on Grey Area and one of the principle actors didn't show and got his part.

GM: And in Repo Man you went in for a much smaller part correct?

SR: Yes I went in for the guy who came into the office with his girlfriend in the set up to get his car back. And during the call back several actors didn't show up and he ask me to be his reader and I read different parts during the audition.

GM: And he liked you for Lite based on your reading?

GM: Was the character of LITE exactly how he was in the script or did Alex give you room to make changes to him?

SR:I made changes. For instant the scene where Emilo and I drove up and I started shooting at the house with a blank was not in the script. I didn't think he would let my dialogue when I said "Get  out of the car white boy!"  I went to a school in Chicago (St. Micheal) where I was the only male african american in the school and I called all the my friends and foes white boys. So it was natural thing to say for me.

GM: So some of your lines were adbibbed?


GM In the commentary for Repo you said you saw Lite as African american Bogart can you elaborate on that?

SR In those days, by being new at pursuing acting with very few classes I had to find someone I admired their style. Bogart was a regular guy, Blue Collar kind of guy but didn't take no shit on screen and I heard from old timer he didn't take any off screen either. I could relate to him. Blue Collar family  went to 14 grammar schools and five high school and three colleges in chicago. And lived in many different ethic groups where being Black wasn't cool. but I had to survive. So, I didn't take no shit.

GM: What was Ellimo like to work with? Did any his family visit him on set?

SR Great he taught me a lot about giving interviews on camera and how to work on camera vocally. Since I came straight from 1 and half years doing Vaudeville shows. Several other actors help me too. Anyway, His father came on the set love him real down to earth we had a good time talking to him. He would tell us jokes etc… It wasn't on the set tho it was during our call back audition His father visited.

GM Speaking of co-stars, I heard Harry Dean was quiet a character. Any stories working with him?

SR He is a method actor and kept it real, honest and stayed in the moment on set. I remember he used to bring his guitar on set and practice.

GM Did you see him and Alex clash at all?

AC No I didn't. Clash no not that I remember. When I am not on set or eating. I stayed to myself and kept my mind, heart and moment into being Lite.

GM Were any of the locations you shot Repo in dangerous?

SR Driving underneath the bridge was little on the shaky side. We worked in areas that could of been dangerous. But, the homeless, and the gangs sorta looked over us. The didn't pay us any mind. The blues and reds had better things on their minds then messing with a bunch of young cats making a movie. The knew we wasn't a high budget film.

GM What the most memorable behind the scenes story you have from Repo?

SY Tracy Walter and I was watching the crew lifting the car up for the last scene. And Tracy said millions of people would pay to be in a movie and we make a living doing them. That is when I took this business serious instead of just having fun doing something, like i spent my entire life doing just having fun. I have thanked  him several times for that quote.

GM Do fans ever recognize you from any of your cult films?

SR All the time. Once i was on the pasadena bus and six young men ran over to me and started reciting some of my lines. And then they recited Bad Man. On different sets during actors and crew will crowd and around me and ask about Repoman, They Live, Bad Dreams, Straight To Hell and Walker. Oh yea and Colors.

GM What was working with Gary Oldman like on Sid and Nancy?

SR: LOL wonderful! the man awesome. Strong intense the kind of actors I like working with. My two favorite strong intense actors are Danny Glover and Ed Harris.

GM Personally what has been your favorite film you`ve acted in?

GM That a terrific film. What current projects are you working on?

SR  I just finish Reluctant Polygot, and  An I gets witness protection. I am directing a one man show now called The Devil and Billy Markham, and waiting for my editor to give my memoir back so I can  publish it. And I getting ready to publish my book called An Actors Spiritual Armor.  Just read a script was offered the lead in but, they are doing another rewrite. Can I get a witness protection.


SR Don't follow your dream, step in the middle of it and do it every day. Every step wheather it's right on wrong is one more step closer to your passion, your love. There is no greater feeling than doing what you love for a living.

Gorehound Mike would like to thank Sy Richardson for taking time out to do this interview and Lou Rusconi for the epic artwork.
Posted by Gorehound Mike at 7:06 AM