In the forth and final part in my Hitchcock Inspired series were going to look at a film which is a literal remake of a Hitch classic "Dial M for Murder" With of course a modern twist. But is it the perfect thriller?


New York millionaire Steven Taylor seems to have it all, a vast fortune a wonderful home and a beautiful wife. But things are not at all what they seem as his wife Emily is having a spicy affair with David a typical 90`s bad boy artist. But sly Steven quickly finds out and makes David an offer. Kill his wife. But what seems like "a perfect murder" quickly spirals out of control and soon the tables are turned on Taylor.

Unlike the horrible Psycho remake (which Mortensen was also in) this is not a shot for shot carbon copy.  Wisely this remake keeps the basic premise of the original  film yet adds new elements to make it stand on its own. 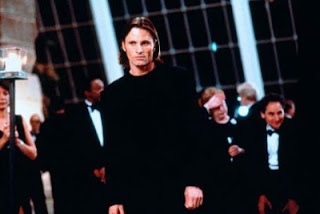 This is an interesting departure from director Andrew Davis`s normal action packed films. He seems out of depths at times with the material but overall turns in a decent thriller. Believe it or not its very sub due compared to what he`s use to doing.  I always like to see a director expend to a different genre so I give Davis credit for trying something completely out of his usual realm. 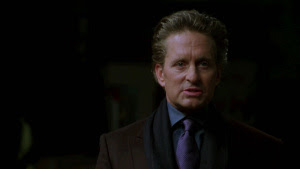 Michael Douglas plays the jilted husband Steven. As with films like Wall Street and The Game, Douglas has the icy rich guy role down to a science. Its a safe choice but the right one, as I do like his acting.
He is such a pro adding little touches that makes his character more three dimensional with out hamming it up. Its also his wordless acting that speaks volumes. He can turn on the charm, yet you know deep down he has little to no real feelings, real cold blooded creep.

Gwenth Paltrow proves that she can hold her own against the powerhouse Douglas. Their is no doubt that her acting range is broad, but still comes off as flat and unlikable, and a film like this hinges a lot of sympathy for her character. Though I dont think all the blame should go to Ms.Paltrow, as I suspect many of these issues were with the way her character was written.

While were on the subject of writing, this film is clever BUT not as clever as it would like to think it is.  All the characters are not very likable and while were suppose to feel sympathy for the Paltrow character she as stated above comes off as just a cold cheating wive.  The lead detective is basically a throw away character that doesn't actually save the day or solve the crime. Why is here there if only fill time/space. Worse yet is the typical bumbling side kick who only utters some dumb one liners, but otherwise serves no purpose to the story.  Come on, do we really need these tired cop cliques. To the films credit despite some character issues and some story padding the twists and turns are well done and it keeps you in suspense as to whose really got the upper hand.

A Perfect Murder is not a perfect film but at the end of the day it is a sexy taunt grabber that keeps your attention and leaves you guessing.

Gorehound Mike hopes you enjoying this four part series. Look at 2013s archives for the other three parts. In closing I like to day that Hitchcock has been the master of suspense for decades and even after his death other film makers have studied from the best and even though just four films were mentioned there are countless celluloid that have Hitch s bloody finger prints on them. So if your not already a fan of A.Hitchcocks films well.......what are you waiting for?