BODY BAG: Zip yourself in for a bumpy night! 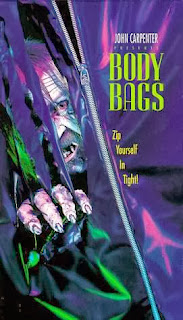 BODY BAGS
Wacky over and over the top describe the horror anthology Body Bags. Made by SHOWTIME network and hosted by John Carpenter himself as a Crypt Keeper type character. The frame device for the anthology is a lot of fun and its cool to see Carpenter act. (though dont hold your breath to ever see him do it again per the commentary.) The wrap around for the stories take place in you guessed it a morgue -with the aide of The Coroner (Carpenter) a screwy ghoul who helps set up the three segments.
By Michael Vaughn 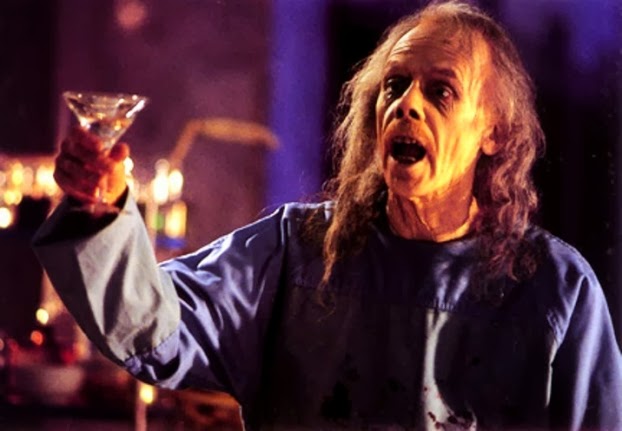 Ok, if anyone’s had to work 3rd shift at a convenience store/gas station this segment hits home. From personal experience you meet some mega creepy people on the grave shift at one of these places. This segment is the first of two directed by horror director (and host) John Carpenter. Right off the bat one of many inside film jokes we learn that a killer from you guessed it Haddonfield is on the loose so we know this takes place in the same universe as HALLOWEEN. Film buffs will also notice John steals a shot from Halloween (but hey he can its his movie) when the killer when thought to be dead rises for one more scare. The mayor fun of this whole anthology is the spot the cameo and I must say GAS STATION by far has the best of them. This segment features no less than TWO count`em two legendary horror directors who make cameos. First we have Wes Craven as a weirdo customer and later Sam Rami as a dead body. Also let’s not forget cult favorites Buck Flower and David Naughton pop up. 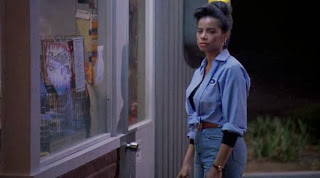 Speaking of actors everyone is pretty solid in their performances. Main actress Blank takes her role seriously without over doing it. Robert Carrdine (best known for Revenge of the Nerds) plays a rather over the top character and yes it’s hammy but it’s a lot of fun as well. The plot is very by the numbers slasher but because of the cameos and quick pace and blood bath at the end it’s in my mind the second best out of the three stories.


John Carpenters second segment is Hair starring the always cool Stacy Ketch as a successful man that has it all, money a nice place and a hot girlfriend what’s missing in his life?  His hair of course. This is by far the best of the three. 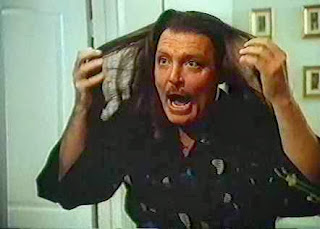 The actors are at the top of their game with co stars David Warner and Sheena Eastmen (as Stacys hot girlfriend) like the previous episode there’s fun cameos by Debby Harry and Greg Nicotro. As light on story as Gas Station was, Hair has a more interesting plot that is both goofy, freaky and in a strange way a morality tale on the dangers of men’s vanities.  Unlike the previous episode Gas Station and the following EYE gorehounds should not expect the same level of carnage but never fear there is some ghoulish special effects and make up so no need to wig out. Also Hair stands out in another way which is tone. This plays more for hair raising laughs which is no means a bad thing and I feel it adds a nice balance of the three, and I wouldn’t be surprised if it was planned that way. While not as gory or serious as the other two Hair has a extremely well thought out story executed beautifully by its director and talented actors. Don’t just comb it over. 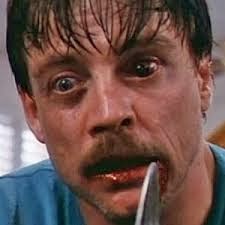 The last segment of the three is Eye directed by Tobe Hopper who of course directed such fims as 1974`s Texas Chainsaw Massacre, Poltergeist etc. Eye for me is the weakest of the three. Mark Hamill (Luke SW`s) plays Brent a baseball player who is headed to the big leagues, but seeing how this isnt a Disney movie you know somethings gotta go wrong. While driving home one night Brent has a terrible auto accident and injures his you got it, eye. Luckily through the miracle of science doctors are able to transplant his eye from a dead man -i think you can guess where this is going. Soon Brent is seeing visions of horrible things through his new peeper.OK so let me get one thing out of the way first, whats up with Mark Hamill doing a cringe worthy accent. Its not necessary and distracts rather then adds anything to his performance. Its just terrible. Also body should have to see a naked Mark Hamill. Speaking of terrible acting model Twiggy plays Brents wife and gives a cardboard cut out job at it. Sure back in the day she was pretty but who ever thought to have her act. Bad acting aside the plot is sort of predictable to anyone whose seen any kind of transplant from a dead person who turns out ot be a killer, hell Simpsons did it before. The highlights are the cameos by legend and hero of mine Roger Corman and John Agar who play the doctors that fix Brent up. 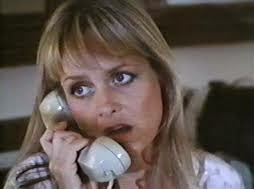 This by far the bloodiest of the three, which makes it not a total lose. Its also  much darker in tone with heavy handed religious themes that felt like this story is taking it self wayyy to serious rather then trying to have some fun like the previous two. Overall is not horrible but just not very special in any sense of the word. The end of the film is fun with two surprise cameos that i wont spoil for you.

Bottom Line: Is this the best anothlogy ever, no not by a long shot but this is a great flick to watch with fellow gorehounds on a Friday night. So Zip yourself in. SHOUT FACTORY has released a great blu/dvd combo of this and of course its packed with extras.
Posted by Gorehound Mike at 6:03 AM