What you'll find when: Megan Is Missing. 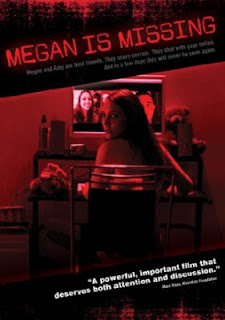 Megan Is Missing happens to be just about one of the most potent, creep-vibe inducing films I've watched in a long time. The last 22 minutes of goes into horrible places, visually and psychologically. It will drop your jaw and leave you uncomfortable and stunned, and your head filled with a couple of highly disturbing images you may not be able to shake for a few days.

This film will get to you.

A little slow to start, Megan Is Missing follows the exploits of a couple of best friends, party-girl Megan (14) and good-girl Amy (13). As unlikely as their friendship may seem, it ultimately makes sense. Amy is very much a nerdy type, bullied and put down by most of the popular kids, and Megan tries to curb all that and have her friend, the only person she can really trust, included. Really, either one can only understand each other.

The film is largely done using the whole first person P.O.V. methods of webcam, cell phone vids, chat room cams, and eventually news reports. I know many who loathe this style of filmmaking, but it works here, seems in fact almost necessary. The film wouldn't be able to accomplish what it does in quite the same way without it.

The film really picks up when the two girls go to a huge party filled with drinking, drug use, cheap pressured sex and horrible, HORRIBLE overpriviliged high school kids. This is one of the more important scenes in the film, as it perfectly shows the bizarre, confusing dynamic of personalities at play, the complicated and volatile social non-structure wherein both these girls exist, yet on two completely opposite sides of the fence. They are both victims, and being constantly victimized.The innocent Amy is in no way whatsoever prepared, emotionally or psychologically, to deal with the party, it's attendees, and what it has to offer. Eventually she drinks too much, is groped and slapped, and catches her best friend fellating some scumbag. Amy eventually vomits all over two girls making out and leaves the party humiliated and sick.

On an im chat Megan tries to explain to Amy the sexual mechanics from her seriously skewered perception. Through Megan's opening up we come to find she's been treated like a toy of some kind by males since she was a young girl. It's heartbreaking to watch and listen to, with Megan in fact admitting that she will do anything a guy wants her to do, as long as she is told she is loved. Yikes.

Now enter Josh. He's an online entity with whom Megan has started up a flirtatious series of conversations with. He claims to be a 16 year old skate-rat, but is never seen by the girls as his webcam is supposedly broken, so his chats merely involve audio. Megan even arranges to meet this "Josh" but he is a no show.

Eventually however, Josh convinces Megan to meet him behind a local diner. She goes to do this, and is never heard from again.

Amy';s intuition is going haywire, telling her that something awful has happened to Megan, and that Josh may be to blame. So she contacts him online after security cam footage is released on the news, taken from behind the diner. It shows Megan being led away forcefully by an older man. Amy contacts Josh online and begins to ask him questions, to which his response is to merely insult Amy by calling her naive and degrading her horribly.

To make things even worse, all of Megan's friends also blame Amy for the disappearance.

The film cointues to follow this and goes to news footage searching for Megan. The film here goes into an interesting montage of footage from an awful, sensationalistic tv show obviously based on that of the interminably wretched Nancy Grace. The report is running a reenactment of the abduction that is tacky, really foul, and in quite poor taste. Much like the real life Nancy Grace herself, and her program.

Josh this time contacts Amy, admitting what he did to Megan without actually saying it, and threatens Amy in the process.

Amy, while looking for her friend and making a video diary, is inadvertantly stalked and taken herself. The last 22 minutes of the movie takes place with footage from Amy's video camera, found discarded in a trash can by police.

I'm not going to detail the rest of what happens, for spoiler reasons and a couple others. However, this is some of the most brutal, potent film I've ever watched. What happens to Amy is every parents, perhaps every human beings, worst nightmare. It is realistic, graphic, and will seriously get under your skin, staying with you long after the credits finish rolling.

In fact, there is an eyes-in-the-camera rape scene that makes the one in Irreversible look like something from Dumbo. Well, maybe not like that, but you get the idea I'm sure. But that is the nice part.

In summary, Megan is Missing is an interesting, psychologically grueling modern day reality fable about the particular difficulties of being young (and possibly) overpriviliged in our society, the damage that can be done from peers and adults alike. Last but not least a most cautionary tale about the dangers of the ease and anonymity of the internet, and all it's possible nefarious uses that reside withing the invisible cracks of the 1's and 0's.

If you're not into p.o.v. films you probably won't like this, but I would advise everyone to give it a chance. A little slow to start, it builds to a payoff that was wholly lacking from something like say A Serbian Film on an emotional/psychological level. And subsequently, emotionally levelled you will be.

Currently, this film is completely banned in New Zealand.

Harrowing and brutal, realistic and oozing with a serious creep-vibe, Megan Is Missing comes to you with both a recommendation and a caveat. This film is for the experienced extreme-horror fan only.

---- Vincent Daemon's short fiction has appeared in over 20 publications, and he is the editor of Grave Demand Magazine. He can be found on facebook, his blog The Writings Of A Depraved Mind http://vincentdaemon.blogspot.com/?zx=dd16cb66ab13f762 , and contacted at vdaemon13@gmail.com ----

Posted by Gorehound Mike at 6:05 AM