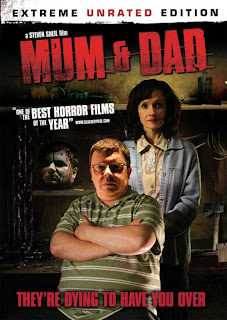 This twisted sick fuck of a film comes to us by way of the UK, and is the directorial debut of Steven Sheil. And I must say I was pleasantly surprised to have come across it.

Polish immigrant to the UK, Lena, is working at the airport with a chatty, annoying girl named Birdie. They also work with Birdie's strange, dim/mute brother Elbie. Almost right from the get go it is established that Birdie has some quirks, as it were, when Lena catches her unrepentantly thieving from the offices they are cleaning. After Lena misses her bus home, Birdie offers the girl to stay the night at her house.

Once at the house Lena meets Mum, who quickly injects her throat with some kind of numbing and tranquilizing chemical. The poor girl awakes in chains, and the roller coaster ride begins. You think you may know where it's going, but you have no idea. 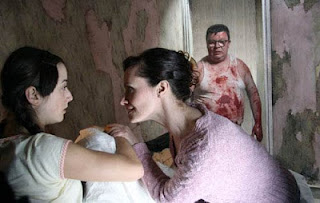 It quickly accelerates from there, as true colors show, and deception, abuse, murder, manipulation and molestation seem to be the order of the day, apparently every day, in this hell house.

The film climaxes on Christmas Day (which it really isn't, the lunatics just rip all the pages off the calendar until it says it's Christmas). As the family is gathered round the old human torso holiday tree (replete with a hideously push-pin decorated penis) all hell breaks loose, and the family unit collapses in an atom bomb explosion of violence, bloodshed, and confused psychological intensity.

There are some of the standard trappings of the genre, but the levels of perversion and intensity with which they happen are way fairly potent. What makes this film work is the in depth, bizarre psychological aspect to the cornucopia of madness. The characters are very well written and competently played. Dad is absolutely frightening, this violent and abusive slob-monster of a human being. Aside from Lena (who, by the way, is incredibly cute), there is absolutely nothing to like about any of these characters, and that's part of what makes it work. These people are dispicable and loathesome in every possible way imaginable.

There are a couple of other neat tricks the filmmakers use here, one of which being that there is no definitive soundtrack. The entire film, but for the climax, is played with nothing but ambient background sounds to accompany the whacked dialogue yelling and shrieking (of which there is a lot). Also, the film is very interestingly filmed. Most of the shots are up close on faces, on situations, and I mean intimate porno close. It all further adds to the constant terror of no one character ever trusting any other, as it truly is every monster for themselves in this household. The claustrophobia of the entirety of the situation is captured perfectly. Everyone sells everyone else out at some point, usually to avoid an abuse, gain a sexual favor, or just be sadistic and see another member of this "family" be punished.

Now also, keep in mind, that it is still an exploitation film. This is not high art we're dealing with, but it's not your average trash that is so common to this aspect of the genre on a consistent basis. It's brutally sick, sardonically twisted, erotically curious (yeah, I said it, just watch and you'll see what I mean, you fucking perverts) . . . I highly recommend this entertaining, shock-trash (I said it wasn't AVERAGE trash, but it's still trash) exercise in total human debasement.

Happy holidays, be safe one and all.

Stay sick, and watch out for Krampus turds.

---- Vincent Daemon's short fiction has appeared in over 24 publications, and he just put his first short story collection, Bury Me In A Nameless Grave: A Collection Of 11, together to eventually be published. He is also editor of the annual Grave Demand magazine, as well as a freelance editor for hire in his down time. He can be found on facebook, and at his blog The Writings Of A Depraved Mind http://vincentdaemon.blogspot.com/?zx=c2884c7b8567b656 , and contacted at vdaemon13@gmail.com ----