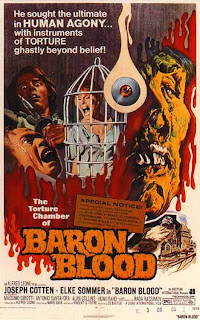 For starters, let me say that there is not a whole lot more that can be said about Mario Bava. The man has had literally volumes of his work dissected and autopsied and pulled apart for all to see. Fans, reviewers, film scholars, and even the occasional detractor, have all written about him and his stylish films to hand cramping ad nauseum. And this is not one of his better films.

The film opens with a loungey-hip muzack style soundtrack (wholly indicative of the time period, and one of the many reasons my father always loathed Italian cinema) playing as we follow a montage of our hero travelling from the U.S. to Austria. He's travelling there to try and auction off some old family property, a castle, that apparently had been the home of one of his ancestors, a vile and twisted baron.

He gets to the castle and we meet the endearing (at least I thought so) Fritz, a leering, peeping dementedly cackling lunatic. He is caught peeping on and by our heros wife. This guy is great, really. You'd just have to see him.

Our hero and his wife decide to do some kind of incantation with a parchment they find to raise the ghost of the baron. They hear a strange sound and Hubby proclaims "I bet it was Fritz and one of his pranks!" Of course, blame the demented Fritz! Ya prick, ya. The next day, however, Fritz is nowhere to be found.

While doing some further investigation, Hubby and Wifey find an odd old painting with creepy eyes that seem to follow them. Like the obvious geniuses they are, this is when they decide to redo the incantation. And this time it takes.

Next we see a horrid ghoul in a graveyard, blood seeping in from under the door, and their magic parchment burst into flame.

The ghoul shows up at a doctors office, gets treatment, then kills said doctor with a scalpel. I found this scene fascinating, because how would a 300 year old ghoul know to go to a modern day doctors office, or even where the hell this office would be at? Really. This ghoul just marches on up to the door and knocks, just like that. Amazing.

Now this ghoul, the Baron, has a neat kind of visual aesthetic going on. His costume more than resembles Vincent Prices from the film Madhouse, with an odd hat and cape arrangement. His face is rotten and meaty-wet, really a not half-bad make up job. Most of the visuals with the Baron, especially the many chase scenes, are where this movie becomes interesting, as Bava and his notorious styling become the focal point. Unfortunately these all degenerate back into the lame Husband abd Wife acting like some kind of Scooby Doo team to find out what all this occult madness is about.

At this pint I'm beginning to miss Fritz. And then . . . FRITZ! The poor demented bastard comes across a body hanged by the Baron and decides to try and stael the corpses ring. I love this guy. The baron shows up, throws Fritz down the stairs, and drags him to a spike-lidded coffin. As he closes the coffin lid, there is a really nice but quick close-up of Fritz's face being punctured by the spikes. It seems Bava has a fetish for this way of death, as it is highly reminiscent of a similar scene from his Black Sunday.

Next we are at the auction, and the castle is won by the creepy and wheelchair bound Joseph Cotton. He immediately gets creepy with Elke Sommer, fondling her fur coat and her hand.

More unexplained chase scenes ensue, and these are essentially the film high points. Classic Bava: the colors and angle, the light-shadow-fog interplays, and the incredibly sexy Elke Sommer looking terrified and panting kind of hotly. All long shadows and twisty wide shots. These scenes repeat themselves over and over again, only in various locations (graveyard, the town, through the castle, etc.). Oddly, every time one of the chase scenes plays out, the song Plan 9, Channel 7 by the Damned seemed to play in the back of my head. If that were the soundtrack it would have been a hell of an improvement over the steady stream of hip loungey muzak jazz.

Did someone mention Fritz? Indeed they did. He is once again blamed as being the possible perpetrator of the crimes. Poor Fritz. Even in death he is mocked and accused.

Eventually our heros meet up with a witch (also incredibly sexy). She tells them that what they have done was foolish, says they need the parchment to fix this problem. However, they burnt it all up, initiating irritated mocking from the witch. She eventually breaks down and says she'll help them. So they go to conjure a ghost wwho speaks through the witch. 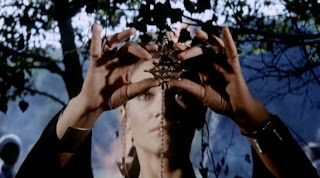 THIS IS THE HIGHPOINT OF THE FILM and a really neat set-piece. The spirit shows up in the midst of the almost neon technicolor fire, doing odd and sexy ritualistic gesturations and telling the husband and wife Scooby Doo crew exactly how to vanquish the Baron. This scene really stands out and fully displays everything Bava excels at in one fell swoop. Afterward the Baron and witch have an unseen face-off.

Long story short they end up back with Joseph Cotton, who rises from his wheelchair and we find out is himself now housing the spirit of the Baron. He traps Hubby and Wifey in the dungeon, and begins torturing Hubby. Wifey end up finding Fritz's corpse in the coffin, and drops the witches magic pendant on the corpse. Oddly, it is Joseph Cotton who begins to feel the pain, as Fritz rises up from death (YES!) to take his revenge on the Baron. Several more corpses show up to indulge in the vengeance, our heroes escape, and the witch's spirit can be heard tearing out the Barons heart. The end.

I must add that as usual the women Bava uses for the film are all absolutely stunning. Par for the course and something that really helped me keep my interest, honestly. Especially the witch.

Not a terrible film, but certainly far below other Bava classics in almost every department, I can only really recommend this for the Mario Bava/classic Italian horror cinema compeltist. While dull, with awful music, annoying characters, no gore at all, and the whole nonsensical Scooby-Doo style plot, the film does have its high points (FRITZ!), such as the few moments of classic Bava aesthetic and camera work.

If you've really got nothing better to do one late evening, or are one of the above mentioned completists, you could do far worse than to check this out. Otherwise, for the standard viewer, I'm going to have to recommend a pass.

This film is currently available streaming on Netfilx, along with a whole host of other Bava films, many of which are far better than this.

--- ---- Vincent Daemon's short fiction has appeared in over 24 publications, and he just put his first short story collection, Bury Me In A Nameless Grave: A Collection Of 11, together to get published. He is also editor of the annual Grave Demand magazine, as well as a freelance editor for hire in his down time. He can be found on facebook, his blog The Writings Of A Depraved Mind http://vincentdaemon.blogspot.com/?zx=c2884c7b8567b656 , and contacted at vdaemon13@gmail.com ----

Posted by Gorehound Mike at 6:31 AM