The Devils Rock-ed Me Right To Sleep 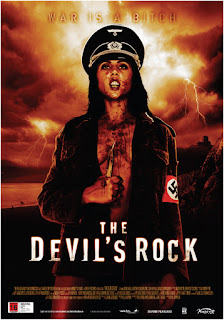 This low rent, snooze inducing piece of trash comes to us by way of New Zealand. And I gotta tell you, this was one of the hardest films I've ever had to watch. It seriously took three seperate veiwing sessions, as the first two lulled me into a horrid celluoid xanax-trance spiral of irrevocable slumber.

Yeah. It's that bad. Which is a shame because the idea is there, it really is.

The film takes place on the eve of WWII's infamous D-DAY. Two ally soldiers are walking along a beach, dodging landmines, when the come across a shadowy Nazi Bunker, from which horrid shrieks are emanating. The enter to find blood and bodies torn to pieces littering the joint. They also find a lone nazi occultist, telling them to get out. He shoots one of the allies and the next 45 minutes is a gruelingly dull verbal and physical face off between the captured ally and the nazi.

The nazi explains that they have summoned a powerful succubus demoness that will be able to wholly help their cause in world domination. Which is interesting, as they did get into the actual historical roots of the occultist nazi agenda a bit, and they were fairly accurate in doing so. However, that didn't last too long and lo and behold, the demoness arrives. Her boring, staid and plasticy make up job is nothing to write home about: 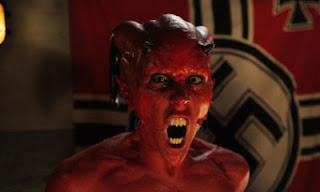 She mindplays the ally, appearing as his dead wife. There is more verbal back and forth. The nazi decieves the zzzzzzzz . . .

Sorry. Merely writing the review brings back some kinda ptsd, and I feel like I'm reliving it all over again. Long story short the film ends with the vanquishing of the "hell whore" as she is referred to throughout a good portion of the film, inducing a serious giggle everytime I heard it. But I don't like writing that because it may entice you to watch it. Really, it's not good-bad, it's bad-bad.

I was hoping, honestly, for some serious, down and dirty Nazisploitation as I have a sick fascination with that sort of thing. Hot chicks in SS Uniforms and bullied pen girls. You know, the good stuff.

Like the title of the post says, The Devil's Rock literally rocked me right to sleep. Avoid this dud at all costs. Though if you must watch it you can find it currently streaming on Netfilx.

You have been warned.
Posted by Gorehound Mike at 9:14 PM