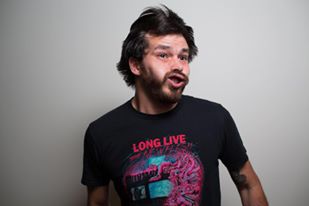 Part of my job as a good horror journalist is to treasure the films and film makers of the past yet always keep my eyes on whats current and new. When you discover someone with raw talent its quiet thrilling. Such is the case with the Jarret Blinkhorn who I got to know purely by happen stance and when I saw this work my instinct as a horror fan told me this is someone who could do great things if given the support and attention. Below is reviews from three short films as well as a bio.

Shorts:
They're Closing In
A husband and wife are trapped inside their home while a group of unknown figures are "closing in" This is the short that brought Jarret to my attention and its very effective in its simplicity and skill. I love the concept behind this short.Using the"trapped in the relationship" metaphor in the context of creatures outside is very clever. On the technical side Jarret knows his stuff take for example his use of medium shots that really help create a sense of claustrophobia and it heightens the tension to an almost unbearable level. There is a perfect marriage  of music and lighting that gives you a John Carpenter vibe but he makes it his own. Both actors are very good and its clear that Blinkhorn can handle drama as well as horror and blend the two perfectly. Tight and effective it shows he has a lot of promise.

Tis the Season
Something was stalking in Blinkhorn holiday short. Mayhem ensues when a mysterious figure in a hoodie brings down bloody havoc on a couple in there home. First off I love the choice to do this in first person. It really gives you the feeling that you are this character. Like "They're Closing In" he uses lighting and skilled camera work to racket up the tension.

Even the horror tropes like the thunder and the usage of the flash light in the dark are brilliantly effective. Sound design and special effects are perfectly in sync to create a amazing cinematic experience of horror. Its also a great movie using nontraditional music, though the warped Christmas music is damn chilling. I can honestly say i`ve not seen a better more professional short. Down right scary! A gift for horror fans.

Sick at Heart:
A husband and wife sit down and have a heart to heart over a nice meal and wine. Seems normal until you take in account that wifey has her throat slit. While not as good as the aforementioned shorts, it still shows a lot of budding talent.  The detached way Blinkhorn approaches the subject adds depth to something that could have been silly.

More about the Film maker in his own words:

I was first turned onto horror films at a very young age. My father owned a black box and would show me whatever slasher came on pay per view, as well as constantly renting tapes from the mom and pop shop down the street. My house was always filled with blood, boobs and carnage. Names like Tom Savini and John Carpenter were household names, and I could never understand why the kids at my elementary school didn't know who Robert Englund was.
As I grew older so did my horror taste, going from surface slasher to body horror I rediscovered Cronenberg and learned about David Lynch, but the old school slashers have never left. My father said when I was really young... "Horror movies are like pizza, even the bad ones are still good", and that explains why he would show me Suspiria and then next night show me Killer Klowns From Outer Space. I graduated high school and after years of playing loud music and partying a lot it was time to find something else to occupy my time. My high school buddies were constantly filming horror shorts, so I partnered up with them and acted, held the camera, whatever I needed to do. Then they left for LA and I stayed around, so I bought a camera and continued watching as many films as possible and shooting whatever I can. After a few shorts about autoerotic asphyxiation and child sacrifice (starring my then 2 week old daughter) and shooting weddings to make extra money, I invested in a better camera and started taking my shorts more seriously. My latest short premiered at Film4FrightFest and will make its U.S. Premiere at BeyondFest in LA. I currently live in Providence Rhode Island with my wife and daughter "Vera" (named after the mom from Dead Alive), 2 dogs, a cat and a shit ton on VHS tapes.

Big thanks to Jarret Blinkhorn. Plus check out his short Tis the Season: https://vimeo.com/115135214

Posted by Gorehound Mike at 9:04 AM