Gorehound Mike caught up make up artist and Face Off contestant Ricky Vitus who tells us about his passion for his art and what its like being on the hit reality show.

GM: Was there one film in particular that made you want to go into a career in make up?

RV: Honestly its hard to pick one film in particular, I had a blanket of films I watched as a kid. Most of them were the Universal Monster films and I really liked the Wolf Man and werewolves. I think "An American Werewolf In London" was a big one for me as far as creating monsters go because I wanted that one when I was alittle bit older not by much probably a little to young to watch it, probably about seven or eight years old. It really triggered in my head when I saw the creature that somebody created it and I really wanted to be the one to create it.

GM: What do your parents feel about your chosen profession?

RV: My Mother loves it. Shes a very free spirited, shes not an artist herself but she respects the arts. She is just wildly out of control happy that i`ve been perusing this as a career. Granite not that she was happy about this but at a certain point I started playing with paint and then moved on to couch cushions, cutting ears off and making them into creatures through the werewolf kits after watching special features on how one of the monsters were fabricated, so she wasn't quiet happy about that but I can guarantee shes happy now.

GM: What was your first professional job and how did that come about?

RV: My first professional job I did was a film while I was at "The Tom Savini Makeup Academy" Outside of the school I worked on a independent film called "Alive and Unburied" an amazing short by Sean Perry, a great guy. It was one of my first professional gigs and I also while I was in school I did a commercial with Steve Johnson which was alot of fun, I did a wolf man for that and acouple other people did a nosterftue and Frankenstein, it was a lot of fun working with Steve Johnson. 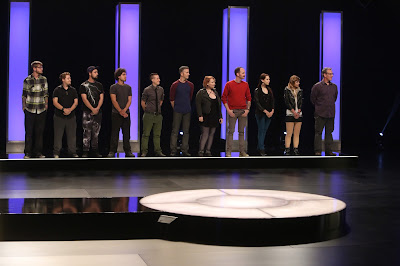 GM:  Lets talk about "Face Off" now. How true is the show in terms of reality

RV: Unlike alot of reality show what you see is truly what is happening. There is very little that I could say is fabricated. Every thing we make on there is by us. Truly what your seeing is what actually happened. Obviously everything is condensed into an hour so some things aren't shown but thats just the real reality of editing. Generally true indeed.

GM: You made a lot of friends with the other constants?

RV: Yeah I`m not sure how the other casts work together but our cast ours really hit it off. When your staying, living and working with the same people everyday usually there is a lot of tension but I think we did really good about it. We were all very high into each other. Like we would go home and play games together (laugh) which relives the tension of the day. We never did actually play hide and seek but we wanted too. We played a lot of board games, card games and i`m still talking to a lot of them to this day. Definitely made some great friends. 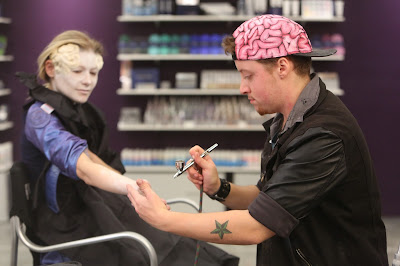 GM: In between shooting did you have any interaction with the Westmores?

RV: When the Westmores would come in we have a lot of interaction with them. They were only able to show a mi nute  amount of it. However they would stay with us in groups or if we were doing a solo challenge. Up to about ten minutes when we would just I don't wanna say shoot the shit, but we sort of did (laugh) But yeah we got to interact with them a lot. The Westmores are great people.

GM:There must be a lot of pressure on the show, do you feel like you thrive on that?

RV: As far as the pressure goes on the show obviously there, there is going to be a lot of it. But on movies there is a lot of pressure especially if your working on a horror film that has shorter budgets. Granite we don't have the whole night on Face Off. We have a time limit (laugh) the clock is a real thing. I would say that they was a lot of pressure and I feel like I do good under it.

GM: What types of make ups pose the biggest challenge to you?

RV: As far as challenges that pose the biggest challenge I`d have to say group challenge because you have to make sure partners are on board with the designs but every team I was on we seem to mash really well but I think keeping to make sure were on the same track sculptural wise.

GM: Who do you think is your biggest competitor, like whose the one to beat?

RV: Everybody (laugh) Everyone this season I truly believe is talented. Mainly every season I watched and I hate to say but you can pin point who is going to be going home. But this season is everyone is so talented. I feel even the most talented people that are there had a fire under there butt. When they got there. we were all thinking we got this we got this and when you get there and saw everyone's skill set we were like Oh shit maybe we don't get this (laugh) So I feel my biggest competitor is everybody.

GM: So what do you have in the works?

RV: Right now i`m working at "Gateway Haunted Playhouse" Its a haunted house in Long Island, rated the best in Long Island. This is my second season here and we open in a month so we got a lot of work. The theme this year is a summer camp over run by inbred hill people, its very "Hills Have Eyes" Basically what happens is the inbred people take over the camp but they try and stay in role of the camp. Because they take over counselor positions, they imprison the children and i`m currently working on whole lotta hill bred people (laugh) and we also have a midway that is alittle bit detached from the haunt, its like a weird haunted carnival. I feel that if a haunted house is a strong strong midway that's not necessary a terrifying but more funny or spooky. So I have a lot of things in the works

Gorehound Mike would like to again thank Ricky Vitus for taking the time to chat with us. Watch Face Off 9pm Eastern Standard Time and root for him!

Posted by Gorehound Mike at 3:20 PM