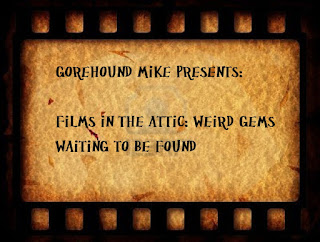 Randy Quaid ... With his media antics we learned that he is one insane guy, but in 1989s black comedy "Parents" he plays one too..Maybe he wasn't acting?

Parents is a film that seldom gets written or talked about which makes it perfect for Films in the Attic.

Plot: The year is 1954 and Nick (Randy Quaid) and Lily Laemle (Mary Beth Hurt) move themselves and there ten year old son Michael (Bryan Madorsky) to there own little slice of suburban paradise. Things aren't so blissful for Michael who is introverted and seems to live in a world totally of his own. He has no friends expect for Shelia (Juno Mills-Cockell) a girl who is also odd. His strange behavior in school leads him to see a social worker Millie Dew (Sandy Dennis) who is a kind, free spirited type. Michael becoming more convinced something is rotten with his parents and the "left overs" they serve every night, which is never explained.  Is it all in his active imagination or is something more sinister cooking?

I can see where "Parents" would have a hard time finding an audience. Tone wise its all over the place. Keeping with the theme of the movie, one can look at it like movie stew. Take one parts dark comedy, season with 1950s food satire, mix in some art house flavor and finally a dash of tried and true horror show. The end result is one very dizzying movie experience but still its odd enough to keep you glued, even if the direction is all over the place. 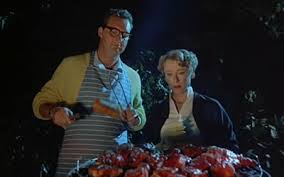 Part of what pulls this movie stew is together is the amazing cast. As stated above Randy Quaid is just totally creepy as hell as Michael's father Nick. The things he can do with a simple look, coupled with some great mood lighting really gives you the shivers. Counter balancing this is Lily played by Mary Beth Hurt. Like Quaid she gives a performance that is subtle but you still get the sense there is something not quiet right with her. They really work well as a film couple. Character actor Sandy Dennis who is best known for "Whos Afraid of Virginia Wolfe?" plays the social worker. Like the above mentioned her performance is layered and we get a real sense of who she is as a person without saying alot. There is some very funny bits with her and her smoking and she also seems to be a very free formed person by her clothes and big clunky bag. Its little touches that makes this film somehow work. The supporting cast is also very good. Bryan Madorsky who plays young Michael is good even with limited lines. Deborah Rush who you might know from the cult tv show "Strangers with Candy" and more recently "Orange in the New Black" plays a minor but funny role. 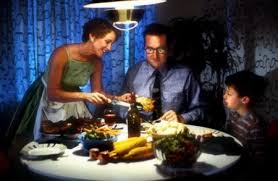 What works in the films favor are very basic even primal themes explored such as family, food, sex and death. Also the link between food and death which has been explored in many different films including Hitchcocks "Frenzy" I could go on and on more in depth but I think you get the picture.  The surreal images is something out of a David Lynch film , both sexual and sick. A perfect example is an early scene of Michael's nightmare. The boy is running, jumps on his bed and is engulfed in a sea of blood. When he tells his his Mother she asks if he took of his pj bottoms, because that's when he has nightmares..Its a perfect blending of the horror and sexual. I think my one complaint about this film is the sub plot between Michael and his little girlfriend Shelia. It really doesn't move the plot along or give us a deeper look in Michael and his inner workings. It would have been better to remove her and focus on him and his family.

Fans of the film "Society" (oddly enough released that same year) will find a rare gem here. In fact I would even say they would make a perfect double feature. Parents explores the idea that the rose colored glasses of the 50's family life might be deeply rotten at its core.While it may never get the kind of following as other horror films of that decade its a must see. With its psycho-sexual surreal nature it manages to be humorous as well as deeply disturbing. If your looking for a break from the usual slasher fare your in for a real tasty treat. You might even come back for seconds.....