HELLO horror fiends, David here...Santa was good to me, he brought me he brought me some joints from CA!
Since its Christmas, and this is Gorehound Mikes were going to be checking out my favorite Horrorday classic "YOU BETTER WATCH OUT aka Christmas Evil. 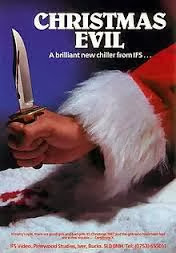 John Waters call this film "the greatest Christmas movie ever made" and with his sense of the absurd as a director I know he means it. This is a very strange film to watch with if you have any sense of conventional horror films whether they are about Santa Clause or not. This is not really a slasher film per say in the tradition of BLACK CHRISTMAS or SILENT NIGHT BLOODY NIGHT. Christmas Evil is more like psychological thriller with a nod to whimsical films like THE 5000 FINGERS OF DR T in that the central character is not so much a killer as he is a very disturbed man and all because as a child in 1947, he saw mommy kissing Santa Clause and more than that Santa was groping her leg and this shocked the boy so much he ran upstairs and cut himself on a snow globe flash-forward to 1980 to see just how much this now grown man( played to perfection by Brendan Maggart) has survived on all the Christmases yet to come. 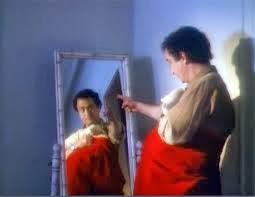 The film is paced like a bad dream in which nobody ever really wakes up. The toy factory where Brenden is overseer is called The JOLLY DREAM and I feel that is what we as an audience are having a joyful Xmas dream where Santa can be recreated by gluing on a beard and filling your van up with presents for all the good little boys and girls at the local hospital. There is so much going on if you can get behind this a bit as it is very slow for the first hour or so and the print I watched was with the Director Lewis Jackson in the audience. Mr Jackson never made another film after Christmas Evil and he was visibly moved by all the attention that night. He said he wanted his daughter to have the print we were watching and that it was in the kind of shape where it could not be run through a projector many more times in any case. This is really an indie classic with all the decor and lighting of an Ed Wood film yet made with love and care just the same. Most of the actors went on to have careers and this little sleeper of a film is now regarded as one of the very best of the evil Santa genre of films made during the 1980's and beyond. I mean this film starts out like a classic Argento with a child witnessing a traumatic situation this time sex instead of murder but then it takes its time allowing this character to show you just how around the bend he really is...I mean he keeps book on the good children as well as the bad in his neighborhood...nothing though will prepare you for what follows with a musical number with this bad Santa dancing like Rasputin in a Hammer film...only to warn the children at the party that if they are not good something "horrible" would come their way on Christmas eve...at this point some of the parents look a bit confused. 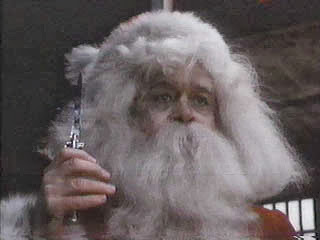 Mr. Jackson spoke at length about how hard it was to ask for more money to finish the film as it began as a project with a budget of $500.000 and this quickly escalated into $800.000 he was saved by the mafia in New Jersey that came through with the much needed $300.000 more in funds. Now the film does not look like it cost a lot even by the standards of the day. The print was turning red by now but this can all be taken care of if a blu ray is done and Mr. Jackson believed there was for late 2014. If you have not seen this little gem of surreal yuletide then prepare yourself with a joint and a cocktail and watch Christmas evil like most normal film fans watch ITS A WINDERFUL LIFE....it really does have a fairy tale ending after all. The original title for this film was YOU BETTER WATCH OUT...and that was the title on the print that evening.

Posted by Gorehound Mike at 1:59 PM