Jug Face: Make some Face time with it....IF U DARE! 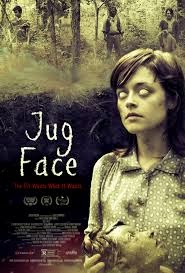 
When you watch a horror film set in the back woods your sure to get either deformed monsters or just twisted Ned Beatty rapers, if you`ve seen one you`ve pretty much seen them all. But JUG FACE wisely takes the high ground and does neither yet creates its own terrible mythos that will send shivers down your moon shine drinking spine.

Jug Face tells the story of a clan of people that must sacrifice certain members at the behest of an unseen force that dwells in "The Pit" How do they know whom to kill you may ask, well its quite simple. A choosen man (played brilliantly by Sean Bridgers) named Dawai makes the jugs in a sort of trance of its intended victim. Our heroin of the story Ada (Lauren Ashley Carter) finds its her face in the latest jug.To make matters worse she has gotten pregnant to her brother all while she is to be joined to another member of the clan.  In order to save herself and the life inside her she quickly hides the jug thinking nobody will ever know. Things goes from bad to worse when people around her start to die, taken by the thing in the pit.

As I said before, Jug Face takes the back woods and instead of filling them with killer rednecks or mutants or mutant rednecks chasing after big breasted co-eds writer/director Chad Crawford Kinkle goes a more powerful and chilling route and shows us just how scary the woods of Tennessee can be. Right away Kinkle draws you into his world of dark scary woods, an evil pit,magic and sacrifice all without being campy or silly but deadly and frighteningly serious. Its a unique world with its own set of rules yet its also very grounded in familiar settings and reality which is so cleverly pulled off. Less is more as we never actually see whats inside the pit. Yet thats not to say we dont see anything creepy that lurks within.

Much of the powerful punch is due to the extremely well written characters that unlikely most "Hollywood" horror films is rich with development. We really begin to care about the two main characters and there plight, we don't want to see anything bad happen to them. Sean Bridgers, Lauren Ashley Carter and an guest star appearance by Sean Young rounds out this amazingly talented cast. Everyone is just fantastic and  breaths life and gives credibility to the script by Mr. Kinkle. Speaking of characters director of photography Chris Heinrich shoots the TN woods perfectly making it almost one of the players in the film. With a keen cinematic eye he really utilizes the ominous strange magical presents of the location. The visual scope of the film heightens the story the telling which is what a great D.P does.


FEARNET.com named this one of the best films of 2013 and I must strongly agree with them. It takes a familiar trappings of a horror film and makes it smart thrilling and down right chilling to the bone, all without being silly and relying on gross out gags (though gore hounds will be pleased) This is Kinkles first feature film and something tells me hes going to be the next huge name in horror. So pull up a jug of shine cause Gorehound Mike doesn't want HIS face to be next....