Gorehound Mike here...Heavy metal and horror movies, they go together like a maniac and a sharp axe! In this series were going to take a look at some films filled with everything great about metal:devil worship,sex murder and BAD HAIR!! Maybe even a surprise interview or two! This serieMs is written by Marc Heller a talented new staff writer at Gorehound Mikes! So sit back, crank some tunes (backwards) and enjoy these cheese tastic metal gore wonders... 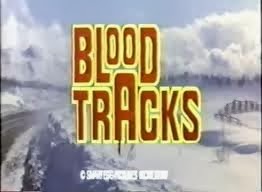 Blood Tracks, also known as "Shocking Heavy Metal" is a paint by numbers copy of Hills Have eyes, only they've replaced the family in the Winnebago with a Swedish hair metal band, their film crew, and a bunch of slutty models
I went into this expecting the cheese factor at the highest possible level, and the film did not disappoint. In the beginning of the movie, we see a woman defend her children from her abusive and drunk husband who tries to take what little money they have. He slices her throat, a superficial wound, she stabs him in the back, he dies. All this happens while a huge burly man who could have broken the whole thing up just stands there and watches, and yells "murderer !"after she's done the deed. She than runs off with her children.
Flash forward to 1985, 40 years later according to the deep voiced narrator. Who also indicates this family has lived in solitude, until intruders came. Those intruders would be the Swedish metal band Solid Gold, and their entourage. They have come to the snowy mountains to film their latest music video. Our rocking Swedes are also joined by models who dance poorly and wear make up like war paint. Initially, they try to provide the comic relief in the film by way of hilariously bad one liners. But eventually, they serve their true purpose, as exposed breasts are a staple of 80's horror. 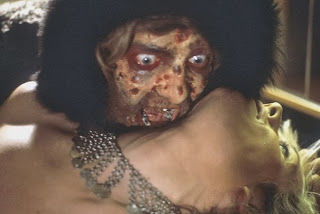 Despite repeat warnings of avalanches, the group proceeds to move ahead and shoot their video on the mountain . Sure enough, after we are treated to a choreographed performance of a hair metal ballad, their performance appears to have triggered an avalanche. But not until they finish, and go back to a cabin to frolic with the models. We get treated to some avalanche stock footage, while everyone in a cabin pretends to react to the impending avalanche, everyone except the one band member who is having sex in a car with a model, who all the others must now save. Obviously, since this in 80's horror film, and someone has had sex, its time for people to die. While the rest of the band and the models dig out the band member and the model, the camera crew heads to an abandoned factory. Which of course has giant red signs everywhere telling people not to go in. In a scene before, it is established the family now lives in the factory, they are grotesque, and they kill someone who is inspecting the property.
Somehow, living in the abandoned factory has turned the family into mutants. The kids now have big scruffy beards, furry jackets, and a bad complexion. The eldest kid and mom speak, while the rest grunt and jump up and down like monkeys. For the remainder of the film, people keep going into the factory and get killed, until someone finally gets up on the mountain and starts offing the family. And than he takes an axe to the head. The intelligent brother attempts to stop the violence, we get some dialogue which is supposed to make us feel bad for the family. And than a lot of people die.
The film tries to disguise itself as an American horror film, but the horrendous dubbing is a quick giveaway. Clearly the studio dug from the bottom of the barrel when casting this film, as reading even the simplest of lines was a task too hard for most cast members. Still, I can't help but enjoy this film in some sick twisted way. If you can handle bad acting and 80's fashion, and you liked The Hills Have Eyes, this is at least good for a laugh. But is otherwise awful.
Posted by Gorehound Mike at 8:50 AM