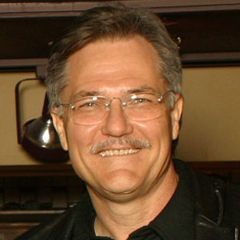 Bio:
Brian Yuzna was born in 1949 in the Philippians. He later moved to America in the 1980s.  He always had a great love for science fiction and the work of H.P. Lovecraft which would later be explored in his films. Fresh out of college Brian saved up his money and teamed up with friend Stuart Gordon, together they would make Re-Animator a low budget film that would take the horror film world by storm. He set out to direct "Society" which is a clever horror film with biting satire about class systems. Not only a smart thriller but it delivers the gore as well. Next he wrote and co-produced the hit film "Honey I Shrunk the Kids"

Re-Animator was a huge hit and it was only a matter of time that a sequel would be made. Bride of Re-Animator was not only written by Yuzna but produced and directed. Not a hit upon its release, it has since found a cult following among fans. Brian would go on to produce and direct some fan favorites such as Dolls, The Dentist Return of the Living Dead III,Beyond Re-Animator etc. Currently he has directed Amphibious 3D. This makes this his first 3d film.
Brain has won many awards such as Silver Scream Award for ROTLD 3 and the two Fantafestival awards for Faust.

Gorehound Mike is VERY proud and honored to have the chance to talk to such a icon and a legend in the business.


GH: How did yo get started working with Stuart Gordon?

BY: I came to L.A to make movies and I was looking for a director and i was working on some projects. A friend of mine Bob Greenburg, showed me around L.A and showed me how things worked in the movie business. He said "You know you should meet this theater director from Chicago named Stuart Gordon. I went to Chicago and watched his plays, and we (Stuart) got along right away,he being a real horror fan and me wanting to make a horror movie. He had this idea to make a Lovecraft movie based on Hebert West:Re-Animator. Stuart had the idea to make this into a tv series and I just wanted to make a movie. So he said no problem, lets make a movie. We then developed the tv story into a movie, and we shot it in L.A. We originally were going to shoot it in a theater in Chicago but they didn't want to do that.

GH: Your most known for producing Re-Animator. What was it like working on it?

BY: It was a really extraordinary, it was my first professional movie. I was in L.A Hollywood and I was making a movie! It was low budget but everything was new and that made it exciting. It was a short shot, we only shot for 16 days but it seemed like forever, we actually shot between Thanksgiving and New Years of 1984. But as I said it was all new and exciting to me, but kind of learning how to do it. (Laughs) I think Stuart and I were the least experienced people there,everybody else worked on movies before. At least Stuart had done plays so he knew how to direct. I got a line producer and we got  a team, Bob Greenburg helped a lot. He (Greenburg) knew the people who worked in the low budget area and who we could get the effects from, things like that. It was just a lot of fun.

GH: Was Stuart Gordon oringally suppose to direct the sequel to Re-Animator?

BY: He was. He initially talked about it, then at one point when we were working on "Honey I Shrunk the Kids" his agents had convinced him he didn't do sequels. I then thought this would be an opportunity to try directing again (first being Society) 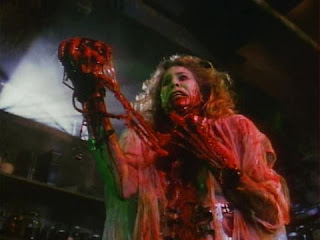 BY: I had worked with his (Stuart) and the original writers Dennis Paoli and William Norris to come up with the script for the sequel but the time element got in the way, we had a treatment but then all of a sudden I got financing for the movie from a Japanese company. The financing was based on our shooting the first week of June 1989. They (the Japanese) were very strict about there deals and it was real essential that when shot at this time, this must of been around February and Stuart was real adimint that the script couldnt be done in the allotted 6 months that we had until we were to shot. I tried to explain this to Stuart that I couldn't do it in his time frame due to the shooting schedule. I then got the writers from "Society" together really quickly to work on a script we just came up with a completely different idea and got  a script ready and shot it.

GH: I`m sure many fans are wondering what if anything is happening with "House of Re-Animator"? 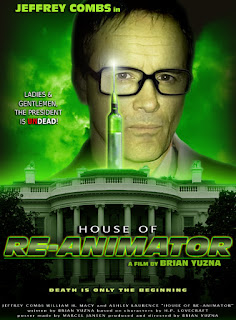 BY:  Thats way on the back burner, the idea of House of Re-Animator was to take place in the White House, which was the original idea for the sequel. I think the title was always Bride Of Re-Animator to keep with the theme of Frankenstein. The original idea for the sequel was that Meg kept living and Dan took her away and there were hiding out. All of a sudden Dan was kidnapped by the man in black and taken to the White House where Hebert West was working I don't quiet remember the details but he (West) re-animates the President. This was during the Reagan era and he (Reagan) was always falling asleep in meetings we just figured it would be funny if Reagan was actually a zombie, and the script had other thing like Kennedy`s brain and celebrity's such Elvis and Marilyn Monroe being in the White House basement and being re-animated. It was never a completed work, it was just more talking for fun and coming up with crazy ideas. I`m trying to remember why that didn't become the sequel. Stuart, William and Dennis`s idea was to have Dan and West working in a mortuary. In Spain I did a label there called the Fantastic Factory and one of those movies in the Fantastic Factory was Beyond Re-Animator and then when I was leaving Spain I decided It would be a good idea to do a trilogy of R-Animator sequel`s and it would bring the stories around to a close. I thought it would be good to have Stuart to direct the first out of the three and it would be Re-Animator in the White House so that's were the idea for House of Re-Animator came from. and the promotional things you`ve seen that we did at the time.I couldn't get financing for it believe it or not.Stuart had point me in touch with someone who could get the financing and for awhile there with thought he we it financed and then boom it fell through. That was 2008 and then Obama went into the White House and the treatment we had for the original story had a lot of satire on the Bush White House and it had become out of date. That is the problem with doing political and satirical things.I was a little concerned about the White House part because I always thought politics and horror don't mix well, science fiction and politics does mix well. I always thought horror was about psychology and religion then politics. Less about culture and more about things like death and sex. So that kind of took the stuffing out of that one and we really needed a bigger budget also it was going to involve everyone from the first one and then it got more expensive and than we needed bigger actors and the financing gets trickier. Thats what happened to House of Re-Animator. 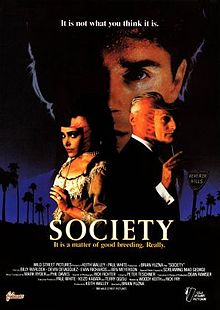 GH: Your first film Society is great satire and seems to be as relevant now as it was then. Is there a plan for a remake or sequel?

BY: I`ve actually been working not on a remake but a sequel called "Society Bitches" I thought it would be fun to do a movie that all took place in these clubs on Sunset Blvd. There clubs always have the red carpet and the bouncers that let people in and its very exclusive, and then if you actually get in the club they wont let you in the  V.I.P section and if you into the V.I.P section there's a more V.I.P section (laughs) were really famous people go and then there's clubs people don't even know about. So I thought it would be really funny to follow some social climbing girl with her friends who get deeper and deeper in the club scene one night. She finds once you get behind the final doors its actually the shunting. Its the idea that someone learns how terrible it is but just wants to be apart of it. In the original Billy Warlock is just shocked by whats going on and disgusted this girl would be like someone who knew how corrupt it is but just wants to get into that exclusive place. I don't have script yet or the financing but I`m working with one of the original producers of Society. 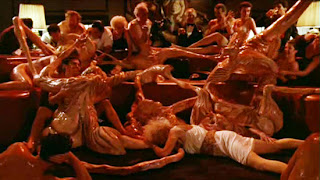 GH: Your a horror fan yourself, seen anything lately that you liked?

BY: Troll Hunter was pretty good., it was totally different. I liked Cloverfield, it was found footage type of thing. It was wild they made such a big monster movie on a little budget. I think a lot of the found footage , its a cool technic but its gotten old. 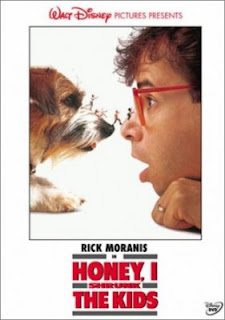 GH: Finally of all you`ve done in your career what are you most proud of?

BY: I`d have to say Re-Animator, because it was the first film I did and its lasted the best. Its become a classic. I love the idea that that I could do something that ended up being one of those movies that I loved when I was growing up. Its one of the classic films. Re-Animator was the one film I had the most control over, obviously I didn't direct it but I paid for it so there was no body over me, I got to make the final decisions. All the all movies after it there's been people who`s has financed it, there's always other people involved. So having that freedom made Re-Animator a lot  of fun and gratifying. Some many films I`ve done a  lot of them have been disappointments, some of them work and some of them don`t. Return of the Living Dead 3 I really liked. I thought it turned out well, it turned out the way we planned it. The Dentist was something that had everything going against it yet it turned out to be a fun movie in its own way. Honey I Shrunk the Kids I was really happy, it was our idea Stuart and I had, coming up with all these ideas that end up being so big in the culture that makes you feel good. I think wow I came up with the idea of a guy riding a  bee and now its on a McDonalds cup and you go wow that's incredible that things like that can happen. Its hard to come up with just one job.