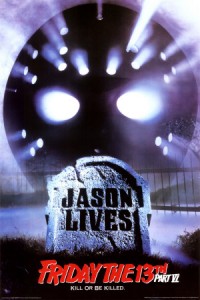 
Lets face it folks part five was such bullshit, I mean it really was a middle finger to the fans. A Jason impersonator, it was like a horrible Scobby Do episode. I was expecting him to be unmasked and say I would have got away with it too had it not been for your meddling kids! Well fans of the series really were made happy when this little known director dusted off the mask and gave us fans something to really scream about!! 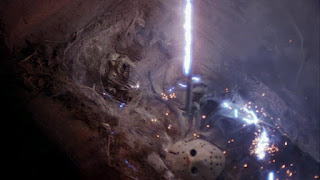 Tommy Garvis the survivor of Jasons rampage wont rest until he knows that the body of Jason is burnt and will rest in Hell once and for all. He, along with a fellow mental patient go to the killers final resting place and plan to do set the body ablaze. But as luck or unluck would have it a thunder bolt and a metal rod to the chest causes the rotting corpse of Jason to be brought back to life. Jason is now stalking the grounds of Forest Green otherwise known as Crystal Lake and it just so happens that a summer camp is starting its first outting and this means a fresh bunch of sexy camp counselors for our anti-hero to prey on.  Now its up to Tommy to stop the killing machine but will Tommy s luck run out with the ultimate slasher maniac. 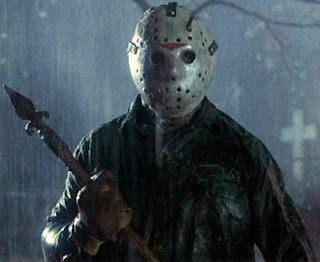 This is my all time favorite Jason film. I`d even say I like it slightly more then the first film.
Tom McLoughlin took a tired series and like in the film itself gives it a jolt of life. It feels less like a decaying Jason and more like a fresh out of the Crystal Lake slaughtering maniac Jason.   Clearly Tom has a great love for the film,using numerous inside references to the series as well as drawing inspiration from other horror classics. Example Jason is brought back to left via a lightening storm very similar to "Frankenstein". This also makes a Pre-Freddy vs Jason reference -One of the little campers awakes with a nightmare, her name-Nancy. Loads more fun inside jokes for fans to discover.

Unlike the previous titles this film has a twisted sense of humor and proudly has its tongue in its rotted cheek. Jason Lives pokes fun of itself but McLoughlin  respects the Jason lores. Even the kills have a dark humor to them. Right out of the gate you have Jason ripping the heart of Ron Palilo of Welcome Back Kotter. 16 kills in all, my personal favorite being a triple beheading via Jason's favorite weapon. Also its good to point out that the gore FX are very well done, no cheese in sight.

Normally I dont mention the music but in this case I feel I need to. The soundtrack is great featuring the nightmare man himself Alice Cooper! Cooper did a video for one of the songs "Hes Back" (The man behind the mask) and features film footage and new footage with Cooper in it. Other great music on the soundtrack such as Felony.

While not the biggest money maker in the series, it got some positive reviews, the first time since the first film., Fans soon began to embrace this for what it was intended to be, a fun thrill ride of kills ands chills and yes even some laughs.. Lets let this Jason Live and put the Jason 09 down for a long long dirt nap!